The anniversary is over. It was a good one. We thought of checking out a new place for dining and did for lunch: Shake and Muddle in downtown Chula Vista, and my croissant benedict sandwich was terrific while Maureen’s “crab and avo,” that’s crab and avocado on sourdough toast with chipotle cream was, in Maureen’s term’s “okay,” and i wonder why that sounds so negative and recognizing Maureen won’t accept “okay” for her repasts probably because she never makes anything that is just “okay,” which i hope says something about me, but i’m never sure about that.

But dinner (supper to the really correct and hip folks from my home) was just right. We passed on experimentation and went to our go-to. The Rose Wine Bar in South Park is one of my favorite places in my history for dining. The ambience is casually wonderful. The clientele are an incredible panoramic mixture of culture, race, politics, philosophies, and you name it, all enjoying the fare with no, no negative vibes. The fare began as appetizers, tapas really, to go along with a rather unique selection of wines. There is a 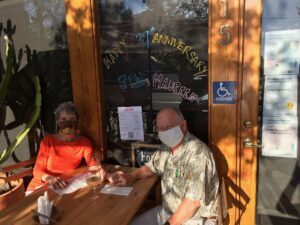 full bar now and the menu has expanded to include entrees, and they know us (see last year’s photo below). i would tell you what we ate, but i can’t pronounce most of them, much less spell them. But boy, was it good. Maureen drank (that’s about four sips, which is a huge amount for this woman with metabolism off the charts) “Don’t Call Me Honey,” which i did off course, although that is not normally a term we use for each other, concocted with rum, prosecco, mint, and honey. i had a very good Greek wine with a name that won’t appear here for the same reason our menu choices are not included.

It was a perfect end to a great day.

Meanwhile major sports was grabbing headlines. The Padres were getting bashed for not trading more. The Dodgers, Yankees and Giants were being lauded for adding great talent (with much money). And Scott Boros did it again to the Dodgers.

In 1998, after the Padres made the World Series for the second time and losing again, they went into the dump mode. But before they did, the owner announced he wanted to retain pitcher Kevin Brown but his limit was an $85 Million dollar contract. The Dodgers offered significantly upward of that. Boras then convinced the Bums that San Diego had topped their offer twice, and Brown ended up being the first player to have a contract exceeding one million ($105 Million). Appropriately (from my biased view), Brown wasn’t worth it.

This month, rumors by the experts abounded about who was going to land the National’s star pitcher, Max Scherzer. As the trade deadline neared, one of Boros’ agents gave Ken Rosenthal a scoop, at least what Ken thought was a scoop. Ken is considered one of the most knowledgeable baseball reporters around, so greatly respected he is the talking head analyst for ESPN. The scoop was the Padres were going to land Scherzer. The Friars had abandoned that chase because the general manager knew he would have to give up too much talent to land the star. Rosenthal blasted his “scoop” across the sports media. He was a genius supposedly. So the Dodgers kicked in a couple of more their star prospects to land Scherzer, essentially bidding against themselves, just as Boros had manipulated them thirteen years earlier.

And the Padre media and fans were ringing their hands. Not me. Oh sure, i would like the Padres to have more consistent starting pitching, but i like the ones they have. i just want them to pitch better, smarter. Same with the other players. You see, i never liked the serf-like conditions before they players had a union, even though it’s a little cockamamie now with the players, the owners, the media all making megabucks off the fans, but i did like rooting for teams where players returned every year. i will offer Tony Gwynn and Cal Ripken as examples.

So don’t cry for me, Argentina…er Padre fans.

And then there is the Southeastern Conference adding Texas and Oklahoma to their teams. i think i have a better idea. Why don’t we go old school? Sort of. Oklahoma and Houston could become part of an old/new conference called the Southwest Conference (remember them?). Rice, SMU, Texas A&M, TCU, Baylor, and Arkansas could return to their old group.

Then the SEC could send Missouri back to the Big what used to be Eight and South Carolina back to the ACC. Then they could woo Tulane to return. That would bring the SEC to Vanderbilt, Alabama, Florida, Georgia, Ole Miss, LSU, Mississippi State, Tulane, Kentucky, and …oh yeh, them orange folks up on that hill, Tennessee.

And of course, the silly notion of playoffs could go away. The national champion would be mythical based on polls, opinions, or fans banging away at their computers voting for their team. And no one would care.

And maybe, just maybe, we could return to about ten bowl games. And ten regular season games. AND no conference title games. Maybe we could even return to tie games like the game was played before.

Too much fan fantacism and too money involved.

1 thought on “Ramblings of a Used-To-Be Sportswriter”