i come from a small town called Lebanon, Tennessee that had a significant farming populace. i spent a great deal of time on my Uncle Wynn “Papa” Prichard’s farm where he and my Aunt Corrine had chickens. Chickens were everywhere. So was chicken clucking, crowing, and squawking. It was fun to chase them. The important chickens were in the chicken coop. That’s where Aunt Corrine gathered the eggs before sunrise every morning.

Chicken eggs were…well, they were eggs. We didn’t do a whole of distinguishing them as i recall.

i acknowledge that when i became single again, i became aware eggs in the grocery store were labeled “Large” and…hmm, i can’t think of the other label. Perhaps it was just “eggs.” i’m pretty sure there were just two different labels, the other wasn’t “other.” i always bought the large because i like to eat chicken eggs.

i have since noticed these chicken egg folks have gotten pretty inventive and poetic when labeling their egg boxes. i generally ignore them and just get the large ones. i mean an egg is an egg.

This past week, Maureen brought home a dozen eggs. When i saw the carton, i was puzzled. i was truly puzzled. 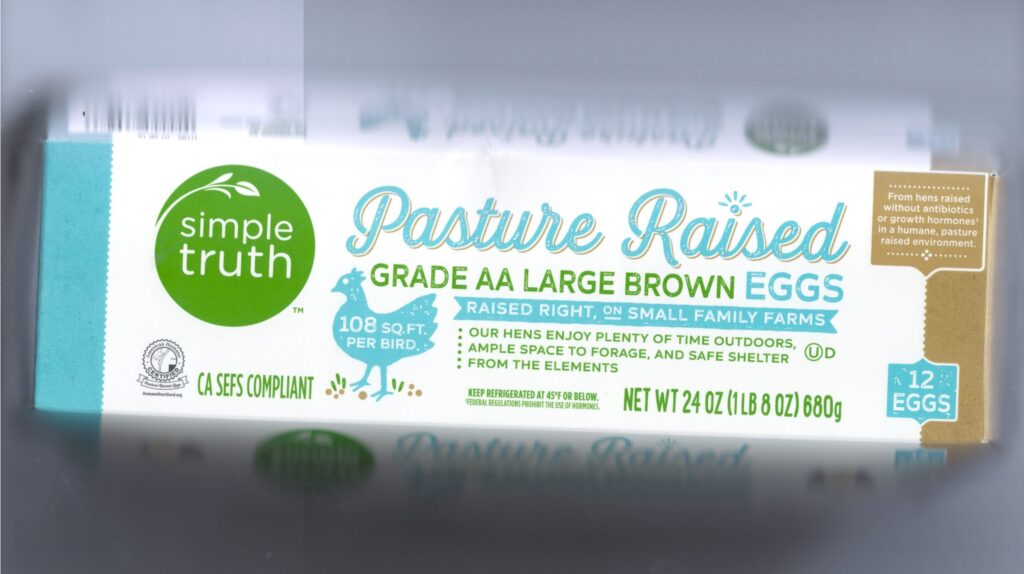 i mean these are some well treated chickens dropping these grade AA large brown eggs into cartons with this labeling. That little brown box in the upper right hand corner reads, “From hens raised without antibiotics or growth hormones in a humane, pasture raised environment.”

Now, i got to thinking. i guess Papa and Aunt Corrine were ahead of their time. In fact, just about all of the farmers i knew were ahead of their time except for that huge chicken coop with a tin roof out there in the triangle of Maple Hill Road, Coles Ferry Pike, and Trice Road where the chickens were truly cooped up. That coop held hundreds, if not a thousand chickens, clucking, crowing, and definitely squawking. It also smelled to high heaven.

The other farmers, and Papa and Aunt Corrine were ahead of their time when it came to chicken eggs. Those chickens were in the pasture, in the yard, in the barn, in the falling down garage, in the coop naturally, just about everywhere except in the house. That is, the ones in the house, were about to be fried. And i won’t tell you how they got to that stage of prepping cause i’m pretty damn sure all of these PETA folks wouldn’t call it “humane.”

i’m also pretty sure those chickens on those farms back in Lebanon weren’t subjected to antibiotics, even if they had a cold, and i’m not even sure “growth hormones” were known to exist back then, at least not for chickens. As a matter of fact, i don’t think there was much ado about a “pasture raised environment,” or counting the time those chickens stayed outside, which was pretty much the entire time because i wouldn’t exactly consider those chicken coops “inside.” I also don’t recall any real efforts to ensure those chickens had “ample space to forage and safe shelter from the elements.”

But i can tell you folks, those eggs, fried over easy, with grits, bacon, and biscuits for breakfast after coming in from milking the cows were the best i’ve ever had.

It appears we have come a long way.