I wonder as i write this how many folks who read it will have a clue about my choice of titles.

The title seems so appropriate for many reasons, some obvious, some not.

I still have a few 78 RPM records on a shelf that my father made and hung in our guest bedroom. The individual records are brittle, being made of shellac resin long before record makers went with vinyl. Many are broken, but it is difficult for me to throw them away.

Nearly all of those records are from the albums my Aunt Bettye Kate and Uncle Snooks Hall gave to the Jewell siblings when the Hall’s got a household music and sound system in their new digs (Lord, it must have been in the late 50’s when they moved from their neat and lovely home on the corner of Castle Heights Avenue and Wildwood Avenue to their new rambling home on Waggoner). They passed along their console stereo to my brother Joe and i, which i dominated. It was in our shared bedroom upstairs. It was old and the records, both their 78 RPM’s and my 45’s skipped a lot. We fixed that by appropriating one of Daddy’s weights for his fishing lines and taping it across the top of the needle.

My favorites of those 78 RPM records are Vaughn Monroe singing “Ghost Riders in the Sky” and a Phil Harris’ totally politically incorrect but funny album “That’s What I Like About the South.” Even though it would be broken en masse or burned today, Phil sang “There Ain’t Nobody Here But Us Chickens” with lines like “We chickens trying to sleep and you bust in and gobble, gobble, gobble with your chin.” 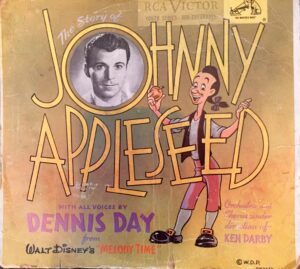 The only album that originally was in my own family was the one my parents got for me and my sister in 1948. Dennis Day sings Walt Disney’s production of “Johnny Appleseed” long before it became a movie. Martha, later Joe, and i listened to it for hours. i dreamed of being Johnny wandering our county and planting apple trees everywhere i went while wearing a skillet on my head and singing:

It’s pretty scratched up now, but it produced an iconic moment when JD Waits and i hosted a party for the wives of the officers aboard the USS Okinawa (LPH 3). Being a single Commander and Chief Warrant Officer, we were known in the wardroom as the “Booze Brothers.” For wardroom parties, we donned Belushi and Ackroyd black complete with fedoras, white socks, and even put sharpie letters on our fingers that spelled Elwood” (JD) and “Jake” (me).

We had noticed we were left out when the wives had a social gathering. So, we threw a party to be included in that group.

Unfortunately, the wives brought their husbands.

This unexpected circumstance did not deter us from having a great time.

JD and i became roommates during the Christmas season in 1982.

He was going to spend Christmas aboard the ship, and i felt that was cruel and inhumane, inviting him to stay in my Coronado two-bedroom apartment. He stayed for about two months when he moved into the Oakwood Apartments across the island. He also bought a 22-foot Cal sailboat and rented a slip in a Harbor Island marina. We were rolling along quite well. I was paying $400 a month for my 2-bedroom, 2½ bath apartment. JD was paying $500 for his apartment and $125 for his boat slip – he had upgraded from a 22-foot Cal to a 25-foot version. The good ship Okinawa was getting ready to go into an eight-month overhaul, and her operations were minimal. Life was easy and good.

Then, the prices went up. My rent gradually increased to $600 per month and another $100 hike was on the way. JD’s rent went to $600, and another increase was looming. We started looking for something a bit better. JD found it.

The second floor, two-bedroom condo was in the Coronado Cays on the strand between Coronado and Imperial Beach. It had a huge patio looking down on our boat slip. The great room had a corner fireplace. We rented for $900 per month, not only moving to high cotton, but saving $350 each month. It was a perfect bachelor pad. We were proud of ourselves.

That’s when we invited the wardroom wives over for a party.

As was our way, JD and i often would pull out one of my records, a 45 RPM or a 33⅓ album, most often blues, and spend the morning listening. One morning, i asked JD if he remembered the “Johnny Appleseed” album. When he said yes, i told him i had a copy. At the back of my oak wardrobe that i had converted into a stereo cabinet with record storage, i found the 78 RPM album and put it on for our listening pleasure. That’s when we got our idea for the party.

At the ensuing festivities when we deemed everyone was sufficiently plowed, we formally welcomed the wives and declared they would have to reciprocate by inviting us to all of their social events.

Then, we had a conspirator put “Johnny Appleseed” on the record player. We pulled out two cast iron skillets and placed them on our heads and began dancing (carefully balanced dancing to keep the skillets on our heads) as we had practiced. At an apex of the song, we did a 180° spin move and repeated it to face the crowd again. They were wowed. Some even claim, and i believe them, the skillets never moved, remaining in the same place as we rotated underneath. But remember, the audience was plowed.

Of late, i’ve noticed i’m being treated differently, deferential even. i can wear anything i want, and folks just think i’m a funny, little old man. People seem to think i’m fragile, a danger to myself. My existence seems to be dominated by people telling me what i should do and what i shouldn’t do…because i am OLD.

Well, it is time for me to put aside childish things and act…well, act like an old man, almost forgotten, like 78 RPM records.

I have spent the last two years intermittently writing how i feel about a lot of things i have sworn (futilely) not to address in writing or my word or mouth. It occurred to me that on the auspicious occasion where i have attained the same number as old records, i might want to set the record straight on how i think about things, about how i feel about things. i was going to set the world straight.

I reasoned if i let the world know how if feel about things, lay it all out, i then could just sit back, play bad golf, take hikes in the open space hills around our home, work around the house, and pretty much do what i wanted except for what my bride won’t allow.

i wrote about twenty or so pages of stuff on religion, equality, politics, and lord, knows what other contentious stuff.

That stuff has been archived in case somebody wants to know how i thought about such things, they can access them after i’m gone. I will make them available for my grandson.

After all, i am like a 78 RPM record. Nobody listens to them anymore, and at least on those particular subjects, no one listens to me either.

Both of my parents and most of my aunts and uncles were storytellers. They told great stories that made you chuckle or feel good.

Hopefully, i’ll stick to that.

But if you get the chance, you should listen to Dennis Day sing about Johnny Appleseed. I’m just sorry you can’t see JD and i do our spin with the cast iron skillets on our heads.