Long before Navy ships became sophisticated power chains of today, most Navy ships were fueled by black oil. Black oil was just a step above crude oil. Environmentalists would probably have heart attacks just looking at it.

It was the fuel for ship’s boilers after coal and before “Navy distillate,” a cleaner burning oil. i have a number of sea stories about black oil and Navy distillate. This story is about black oil before that other stuff became the Navy’s fuel of choice. It was a thick, viscous, and clinging substance: think of B’rer Rabbit, B’rer Fox, B’rer Bear, and the “Tar Baby.”

In the summer of 1963, the USS Lloyd Thomas (DD 764) was on exercises in the Atlantic OP areas (operational areas). i was a third class midshipman. We were en route from Sydney, Nova Scotia to Bermuda and were refueling from an old Navy oiler. It was the time of black oil.

During the refueling operation, i was assigned to the “DASH” deck aft. i don’t think the sailors topside who weren’t on the refueling teams were wearing service dress whites as in the Goodrich photo, but they could have been. We were in our dungarees (far and away the most impressive, most effective, and most appreciated working uniforms for sailors ever) and in kapok life jackets. We didn’t wear hard hats but we did have on battle helmets.

Ray Bean, a member of the Facebook group, “US Navy Gearing Class Destroyers” posted some rather amazing photos of the USS Goodrich (DD 831) refueling that same year. Ray’s photo here shows the after refueling station on the DASH deck, just forward of the after gun mount: 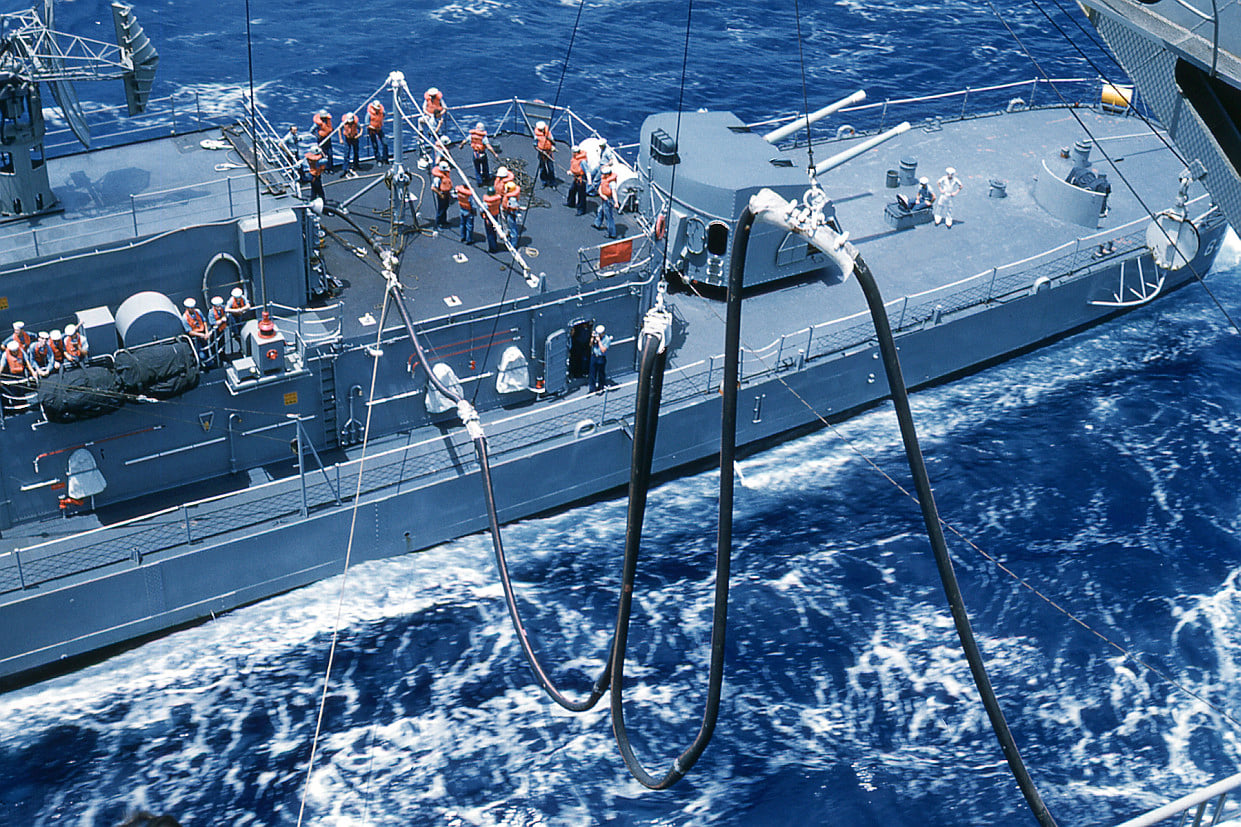 The refueling hoses were secured to the post in the middle of this photo and the end was placed in a fitting which was a fuel line to the ship’s tanks. The hose was tied off with what we called a “pigtail” to keep the hose in the fitting.

On this particular evolution, the deck seaman in charge of securing the “Pigtail’ did not do a good job. When the refueling began, the force of the black oil through the refueling lines broke the pigtail. Black oil hit that sailor dead on, carrying him back into the lifelines in the upper left hand corner of the DASH deck as shown in the photo. He collapsed in the corner completely covered with the oily goo.

The disaster was reported to the captain on the bridge. He sent his executive officer back to the station to take handle the catastrophe. By the time the XO got to the station, the pigtail had been secured and fuel was being pumped into the tanks. But this old exec was proud of his self-importance. Seeing the fuel was pumping, he raged about cleaning up the mess. He pointed to the gunky mess in the corner and demanded to the officer in charge to get rags, clean the mess up, and to throw that oily mess overboard.

The officer in charge then said, “But sir, that’s Seaman Jones.”

The XO, startled, mumbled something about cleaning everything up and meekly went back to the bridge.

After we cleaned up the seaman, we all laughed.