This was begun last night, and i got stuck. And i got sleepy: After all, i am an old man. Then in an email today, one of my closest friends from Vanderbilt days, Susan (nee Butterfield and affectionately known as Butter) Brooks, asked about what i had done and where did we dine. She opened up my mind as she as done a number of times in the past. Thank you, Susan. i completed the post this afternoon.

i sit in the room. The fire has been a quiet one, crackling minimally. i have turned out all but the reading light. Maureen has gone to bed. i have read some. i have filled out my tomorrow’s plans. My hands on the keyboard in my lap are old hands, weathered, veins standing out, wrinkled. Old hands.

i can remember donning my double holstered six-guns and heading out to the empty lot between our home and the Padgett’s. Night. Summer. Looking at my hands and envisioning them as old, weathered, cowboy wrangler hands, quickly darting into the holsters and with a blaze of glory, surpassing even the quickness and accuracy of Wild Bill Hickok, wiping out the bad guys in the black hats. The absurdity of imagining a nine-year old, barefooted, shirtless in shorts, carrying toy six guns for instruments of justice and death never occurred to me then as it does while those hands poise over the keyboard by the fire.

It has been a good day, a fitting day, i think. i kept a vow of responding to well wishes.

Then, there was this experience we attended. A fairgrounds, a horse race track. In some respects, an odd place to revere artists.

i remain somewhat stunned. To say i was moved is an understatement. This huge enclosed space was continually filled with brush strokes recreating Van Gogh’s works with accompanying and very appropriate music (there were even a few scores from Don McClean’s “American Pie” side “B” where McClean honors the artist with his songs, played beautifully by an orchestra at the exhibit). Technology gave us an essence of the artist without allowing the sophisticated electric magic to come to forefront. 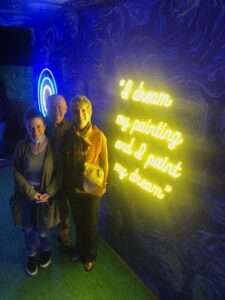 It was truly magic. The photo shows at the entry into the exhibit. Van Gogh’s quote on the wall is  “I dream my painting and I paint my dreams.”

Truly. i found myself hoping that somehow, somehow, Van Gogh knows of the appreciation he earned and has now been so beautifully captured.

After that, Maureen and i went to The Fishery in Pacific Beach, a surfing part of town with the air of bohemia. The restaurant was true to its name in atmosphere.

The oysters were as fresh as they could be and as good as i have had anywhere.

Their clam chowder was right up there with the Black Pearl in Newport, Rhode Island, and Hudson Bay, a shack in the public sea fishing boats near Shelter Island.

The Black Pearl is where i sat next to Frank Sinatra who had sailed that day with the owner of the Black Pearl, both the restaurant on the pier and the two-masted schooner moored down the pier. The secret i was told by the waitress (Kathy McMahon was whom i dated while in Newport in those magical years and continues to be a close friend: she was attending Salve Regina and is now a retired doctor (as if she could actually really retire) in special education at the University of Miami, Ohio) was armagnac.

Hudson Bay closed several years ago. On its last day, Pete Toennies and i went there. The owner and holder of the magic recipe for the chowder saw us eating our chowder at the rail on the narrow porch looking out at the fishing boat crews cleaning up. The other customers had left. She brought out a bottle of the chardonnay we were drinking and we discussed clam chowder, Arizona where she was headed, the state of the world, and over that bottle and one more, the world seemed a little bit better. A beautiful afternoon with a good soul. She did not pass on her secret to chowder.

So The Fishery chowder is in high cotton.

The mussels and their broth and the bread served with it was beyond incredible.

It was so good, we ordered the Chef’s Catch to go and had it for dinner with Maureen’s salad. Yesterday’s catch was mahi mahi and cooked with butternut squash, sun dried tomato, cilantro lime crema, pine nuts, and cilantro.

We ate on dinner trays, watched an episode of “What’s My Line.”

i write after a long day and pretty long life, certainly a crazy life.

It was a fitting day.