i’m sure there is something i should be doing. Some task. Some followup. Some phone call. 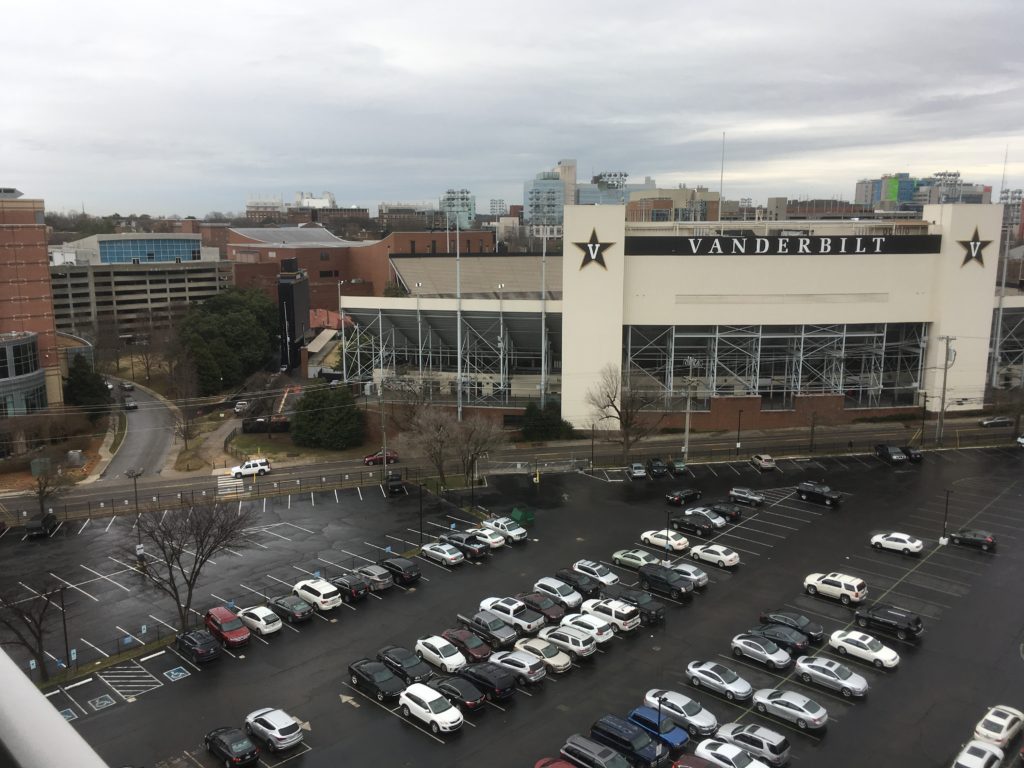 i don’t see the parking lot. i really don’t. i thought about cropping it out, but i’m lazy. i’m just enjoying the environs where i spent a great deal of learning time.

No, i didn’t graduate. Just learned a lot. Dumb, or perhaps just naive, real, no kidding naive. Engineering instead of English. 18, 19, 21, 20 hours for the four regular semesters. Oh, did i mention not studying, hardly at all, partying, drinking? Proved it by doing well in ’67 summer school and almost made the grades to remain. Drama, Philosophy, Modern British and American Fiction. Engineering Statics re-do: oops on the last one. Missed it by that much. Couldn’t have remained anyway. Lost the scholarship. Back then you had to stay out for a year before going anywhere else, at least in Tennessee. Ended up having one of the best years of my life working for Fred Russell and the Nashville Banner sports department as office boy, assistant to the sports managing editor, cub reporter, bowling editor, figure-8 racing editor. Before going back to school. MTSU. Couldn’t have gotten a better education in literature anywhere else. Anywhere.

And it was right here, outside this hotel window like in that photo above. Dudley Field. Memorial Gym (the sweeping roof behind the stadium). On the other side of the stadium is Hawkins Field with its Fred Russell Press Box. The soccer and lacrosse stadium, the practice football field. Somewhere amongst all that stuff i see was the intramural six-man touch (ha, ha) football field where jaws were broken, concussions abounded, no quarter touch, you might say.

Like the intramural field, most of my haunts are gone. They are even tearing down my Kappa Sigma fraternity house which was a year old when i matriculated in ’62. New age stuff. i think that’s good. Probably. The Hippodrome is gone. King’s Inn is gone. Rotier’s is still here, a landmark, but i can’t get my own beer and keep my own tab anymore.

And i’m going to be with family. Honoring my mother. Can’t get much better than that.

Before it starts and i get all teary, thanks should be given:

First, there is Elmcroft of Lebanon, Tennessee. My father spent his last month of life there. My mother was with him and stayed around another nine months before joining him in that other place. It was there the seeds of Sunday’s events were planted. Elmcroft has a program called Second Wind Dreams. It is much like Make a Wish but for seniors and the resident doesn’t have to be terminal to be selected. Amy Barringer-Boggess was the social director when my mother was there.

The two talked about basketball. Mother told her about being in the LHS Blue Devil Hall of Fame and her basketball record. She also told Amy about how she and Daddy went to LHS girls basketball games forever and how she loved to watch Vanderbilt’s women’s team.

So Amy kicked the Second Wind Dreams into high gear. She and the Vandy women’s PR guy (sorry, guy, i don’t remember your name) set it up for Mother to meet the team during a summer practice session and then come to a game to be honored. In secrecy from my mother, Amy told me of the plans. i was elated.

So about two years ago, i floated the idea of honoring my mother in abstentia via email to a bunch of Vandy folks. The Vice-Chancellor of Athletics, David Williams (who retired officially yesterday to go back to teaching law) said it should happen. Candice Lee, Associate Vice-Chancellor/Deputy Athletic Director, took the ball and dunked it. Andrew Maraniss, author of one of the most impactful books i’ve ever read, Strong Inside: Perry Wallace and the Collision of Race and Sports in the South, was constantly helping at every opportunity. Matt Anderson, the Assistant Director of Marketing for Vanderbilt Athletics coordinated the event and our participation.

And Sunday, Estelle Prichard Jewell will be honored for her high school basketball performance. Just for the record, she scored 33 points in one game when most games total scores did not total that amount, and she scored 287 points in the 1934-35 season. Both were records remaining intact until Ann Lucas broke both of them at LHS a quarter of a century later (Ann also beat the heck out of me in a one-on-one in the Heights gym when i was on the Hilltop and she was playing for the Blue Devils).

i don’t expect a big crowd. The Commodores have not been drawing well. Tennessee should bring out some fans, but the game conflicts with the Super Bowl. It doesn’t matter. i’m sure Mother is up there smiling her wry smile and my father is beaming with pride and love but also laughing his head off.

Thanks to everyone who made this happen.

As i have said to some, i am in training to hold back the tears.

And this view with its memories ain’t helping me a whole lot in my training sessions.

4 thoughts on “Hmm…Irony Abounds, and All Is Good.”