This is, quite possibly, my favorite piece about Willie Nod. It is not exactly a poem, but it’s not exactly not a poem, pretty much like all of the stuff i write…i hope. Still it is one of my favorites. It was written in November 1982. It was soon after a golf round where i saw several of the long eared jack rabbits who were plentiful around the course and this neck of the woods. These rabbits were very different from the white fluffy tail rabbits i knew in Tennessee. So i decided to write this to let Blythe know about these different rabbits.

Willie Nod and the Rabbit

Willie Nod decided it was time to have another adventure.
It so happened a rabbit was also ready for an adventure.
Like these things normally start out, Willie Nod and this rabbit ran into each other.
It happened in a field, which i would have liked to have been in Tennessee, but
The rabbit was scrawny, had bug eyes and long, thin, almost sharp ears,
Totally unlike the fuzzy, warm, slightly chubby, floppy-eared Tennessee rabbits,
Although it’s been a long time since i’ve seen rabbits in Tennessee.

Regardless, this particular field was near Yuma, Arizona,
Which partially explains the scrawniness of the rabbit.
This rabbit, by the way, had a name unlike most of Willie Nod’s animal friends.
Rabbits have been known to have names
Like Bugs, Peter, and of course, there was Harvey,
Although technically, Harvey was a puhka.
So this rabbit had a name too.
His name, oddly enough, was Rabbit Smith. 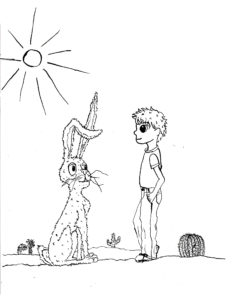 Rabbit Smith and Willie Nod met in this field in Yuma, Arizona.
Rabbit Smith liked the dry, hot weather of Yuma.
That’s why he was skinny and his cousin in Tennessee was fat.
In the shy way of rabbits, he said hello to Willie Nod.
Now most rabbits have lots of relatives.
Rabbit Smith was an exception, as he related to Willie Nod.
It did not make him unhappy, even though it did make him different.
“Well, Willie, if you don’t have a lot of other people to worry about,
You don’t have to worry about yourself so much.
i’ve never been too much of a worrier;
So one day, when i was all wrapped up in worrying about all those other scrawny, bug-eyed rabbits,
I decided I was worrying too much;
Took off; headed east.
All of those scrawny rabbits originated in California.
Those cuddly ones from Tennessee and other places have never really been rabbit enough to associate with us.”
“Anyhow, I got as far east as Yuma and all the rabbits had just about quit being around.
Stayed here ever since.
No worrying about all those other rabbits.
Oh, it sometimes gets a little lonesome, but
There’s always a prairie dog or two when I need to talk.
I figure lonesome is a whole sight better than worrying, or
Even more to the point, being worrisome,
For if I am worrying about all those other rabbits,
They must be worrying about me.”
Willie Nod got about as tired of this spiel as you did,
Wondering where it was all going to end.
It didn’t.
End.
It just sort of stopped.

One day, as it always happens, it was time to part ways for Willie Nod and Rabbit Smith.
You see, Rabbit had noticed Willie had a slight cold
The night before, so he made sure Willie Nod had a blanket before going to sleep.
“Willie,” he said the next morning, “I started worrying about you last night.
So I’ve got to go.”
Rabbit Smith went off, lickety-split, over the fields of Yuma.

Willie Nod wished that Rabbit had waited a minute before taking off.
You see, Willie Nod had figured out the problem:
There’s a difference between caring and worrying.
Some rabbits just can’t tell the difference.

At least, Rabbit Smith didn’t worry too much.

1 thought on “Willie Nod and the Rabbit”