If your are an old man with any compassion, you contemplate, think about all the what if’s occurring in your life. At least, i do.

It is also a time to deal with loss. Friends, family of my generation are going to another place. i wonder why. i recognize it could be me. i moan i cannot have more time with those leaving me behind. i am contrite from not being able to explain misunderstandings, misperceptions we did not resolve. i miss the good times we had together.

This past week was a whammy for me.

Our neighbor, Morice “Spud” Mumby, took the ultimate hit early Saturday morning. Spud lived across the street from us. He and his wife Vonda were two of the original folks on our cul de sac. Thirty years. Spud was a curmudgeon, a term of praise for friends by men my age. Spud was a Navy helicopter pilot who served in Vietnam, a retired commander, realtor afterward, and…well, he was Spud. He was from the past: a hunter, someone who lived off the land. Mounted deer heads, other game skeletons, taxidermy marvels of game he or Vonda had gained. He served us his venison, sausage, quail, pickled quail eggs, made his own wine, and provided me  the best port i’ve have ever had. He was a realist who cared. i cannot think of a better description for a man of our age. We spent hours outside our houses, on the street even, talking about how screwed up the world has become.

The world is a bit more empty in the Southwest corner for me.

Then i finally confirmed another special person in my life had also passed into the other side. In August 1959, John Sweatt became my hero. i was a diminutive sophomore on the varsity football pre-season practice. We reported to Castle Heights two weeks before school started, pre-season practice. John showed us where we would be for those two weeks. It was on the second floor barracks of Smith Chapel. There was no quarter for the two-a-days, and considered sissy to drink water, and de riguer to swallow salt tablets. “95-95” we used to describe the temperature and humidity. Brutal. Loved it. And John would gather up the town boys after the morning practice and drive us to Johnson’s Dairy where we would buy half-gallon cartons of orange drink. The juice would be gone before we returned from the one-mile drive.

Then came his gift to me. Newport, Rhode Island, September 1967. We were in our second week of OCS, where first class cadets were our drill instructors. Not good. It was a month of a hell week. During the first weekend, i had called John. He was a lieutenant junior grade, an engineer on the USS Basilone (DD 824) home ported in Newport. We talked and promised to get together.

That Tuesday after the evening mess, our DI wannabes called us out for a room inspection. Doc Jarden, my roommate and i, like every other fourth class OC, was standing ramrod straight at attention flanking the door into our room. The inspector, a first class OC, delighted in being the bad guy and was picking his way through the first room in the passageway. In one week, he had managed to give us the impression he was Satan incarnate. We were almost in fear of him.

John entered the other end of the passageway. After Basilone’s liberty call, he came over to King Hall and climbed up the stairwell. When he entered in his service dress blues, he might as well have been the Chief of Naval Operations, the four-star admiral. If possible, the OC’s stood even straighter as he came past them. Our barracks room was two down from where the DI was having his fun. John motioned with his head for us to go into our room. i introduced him to Doc. John sat on the rack, put his cover on the desk, and pulled out a pack of Winton’s, offering one to each of us, which we accepted. We began to talk, mostly about home.

The DI emerged from his lashing the first room’s occupants for unsat quarters. He saw two of his OC’s were not in their proper stances by the door. He charged into the room ready to read us the riot act or worse.

As he entered, the DI realized there was a real Naval officer sitting on the rack in front of him. He was confused. He had on his inspection cover, but it was improperly pushed back on his head.  He couldn’t  conclude whether he should pull his cover down and salute, salute and then pull his cover down, take off his cover and salute, or salute and take off his cover, which produced a flurry of hand waves in front of his face.

John dismissed the DI who hurried out of our room. Doc and i laughed. John had given me balance, allowed me to see the hilarity in an Officer Candidate lording over guys who were just three months behind him in training. It was all much easier after John’s visit, and i could never thank him enough.

There were others after us, but, as far as i know, John, Earl Major, Lee Dowdy, Bobby Bradley, and i were the only Heightsmen town boys from my four years up the hill who were Navy officers. Bobby graduated from the Naval Academy. He lost his life when his aircraft crashed into the Atlantic before Earl  graduated from Auburn and was commissioned and before i went to OCS. The other four of us passed each other at various duty stations for years. Lee finished his four-year obligation and earned his doctorate in international relations. He is retired, living in Montgomery, Alabama, with his wife Teppe. Earl and i hooked up in Newport in 1973 when we both went through the department head course at Destroyer School and continued to be close with assignments in Long Beach, San Diego, and places near. We remained close until he passed, including his last night where we watched a basketball game together in his hospital room in Rosarita Beach, Mexico.

Unfortunately, it is that time in my life when i will continue to lose friends until i join them. i remember a poem i wrote about my parents after i visited them back home when they were in their nineties:

the old folks sit in the too warm room,
television images blink randomly,
the mute button silences the room
although they do not know as the hearing aids
lie on their respective tables with other
paraphernalia required for the elderly;
they sit knowing the time will come soon:
waiting grace.
Noble.
Sad.
All is right with the world.
they and the remaining few of their generation
know how to demonstrate
waiting grace.
no threat, no fret, no fear
shows in their continence:
they do what they can and
what they can decreases perceptively daily,
faculties fade and with the fading,
the joys of their industry escaping slowly:
waiting grace.
they have endured the test of time when
times were harder and
simpler and
they hold to those codes of right and
simplicity and
goodness to the neighbor, friend and
to service:
waiting grace.

i am there. There are a few more years of being me left. i don’t think i will live as long as my parents as i have lived a lot harder, wilder life than they did. But it’s here, man. It’s here. i just hope i can achieve their waiting grace. 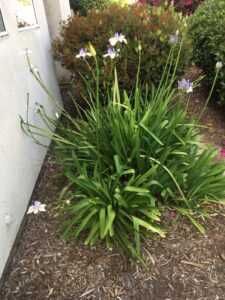 And then last night as i grilled our steak on the grill outside our kitchen, i looked down the side yard. Some bird had brought seeds to his eating place sometime. In the middle of the blooming Lily of the Nile were flowering irises, the state flower of Tennessee.

There is beauty and peace in the world. We just have to look for it.

Rest in peace, my good friends John and Spud. You have earned it.