It must be Thanksgiving time. The weather’s right. Just enough briskness in the air to feel like back home in Tennessee. And we have reorganized who does what chores out here in the Southwest corner. Thanksgiving.

It all boils down to…er, smokes up to the turkey.

You see, when we are at home for Thanksgiving, which is almost every year, i have the honor of smoking the turkey. i learned from the famous Col. James Lynch, also known a “Death Dodger” and “The Alligator.” i watched him smoke a Thanksgiving turkey in the early ’70s in Paris, Texas. i bought a smoker. Damn near burnt up our home in San Pedro Navy Officers Housing in ’74. Figured it out.

For about ten years after Maureen and i married, she wanted a traditional turkey, scoffing at the idea of smoked turkey, like when she laughed hysterically when Bobby Byrd told her about “beer butt chicken” a few years later. We haven’t tried that beer butt thing, but when i got her to let me try smoking that turkey once, it has become our mainstay (recipe story to follow).

This year, i decided to enter a brave new world and figure out how to smoke a turkey in our Japanese egg grill knock off. Damn thing has almost, almost made me a cook instead of a macho griller, Australian type with get-the-fire-roaring and throw the steak on the barbie, guessing when it’s done to everyone’s specifications: always turns out way too rare or way too cooked but no one cares because they’ve been downing Fosters…actually in my case that would be Emu beer.

Well, we needed a test case to see if this new fangled contraption could equal the wonderful but labor intensive smoker. So Saturday, i marinated and smoked a pork loin. Success.

Being in a groove, i offered to cook my chili tonight. Well, there are about 4,368 stories about this chili. It originated when JD Waits and i were roommates in a two-story, two bedroom apartment on Coronado, with a rent which now probably runs more than our combined salaries then and pretty close to what our income is now. Combined. We were  shipmates on the USS Okinawa (LPH  3) and known as a duo knock-off Belushi and Akroyd’s “Blues Brothers” except we were known as the “Booze Brothers.” 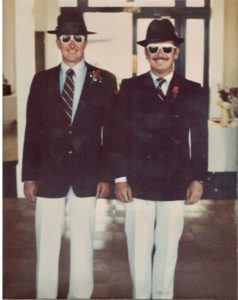 i do not have a photo of what we wore out as the “Booze Brothers” in ordinary party times, but here is one of us in our more formal attire when i was the best man at JD’s second wedding to his wife, Mary Lou. That is his second time to marry Mary Lou.

But when we shared that apartment and later, one in the Coronado Cays, we became legends. One reason was our chili. One morning, while listening to my old 45 RPMs on the magnificent stereo system i had bought in the Navy Exchange in Sasebo, Japan in 1970 along with complete Nikon and Nikkormat high end camera set, which alone cost more than the national GNP of a third world country, and in its entirety set back my financial status to something more fitting in the Great Depression…Any how (as my mother used to say when she went off track while telling a story and then returning to the original tale), we were drinking beer and talking crap as we usually did on a weekend morning before launching into another Booze Brother’s adventure (unless we hung out and watched our favorite television show, which ran only on Saturday afternoon, which was midget wrestling reruns from the 1950s with [i’m not kidding about the names; i didn’t make them up] Sky Low Low, Little Beaver, Lord Littlebrook, and Fuzzy Cupid ) when we came up with perhaps the best idea we ever had. We decided to host a chili party at my apartment in Coronado for the Okinawa wardroom. It was legendary, at least in the annals of LPH lore.

i’ve been using our formula ever since. i even won a chili contest once but i didn’t divulge my secret since a great deal of it really isn’t mine. But i was on a roll after the pork loin and offered to make chili last night. Took less than two hours for the chili and the cornbread, a supper treat and i got the cornbread, sliced, grilled, and buttered by Maureen this morning with breakfast. Double treat.

So now, i’ll be prepping for the big bird event Thursday. More about that in a following post.

Along with the other chores, i decided it was time to get back into the fitness thing, so i have begun walking in the early morning. i’ve never liked early morning exercises except in in 1977 and 1978 when i ran the morning run with the second class midshipmen on their summer cruise at the Amphibious Base, Little Creek, Virginia when i was the Assistant Officer in Charge (AOIC, of course) of the Surface Warfare phase and earned the title of “Hootin’ and Screaming” because the Marine guy, also from A&M, saw me coming back from late night carousing when he was beginning the Marine morning run and watch me begin the Navy version when he returned — he said i “hooted with the owls at night and screamed with the eagles in the morning.” The nickname didn’t stick. i liked it.

So i went on a walk the last two days, an early morning walk because i have discovered if i try to do it later in the day, something gets in the way, always. i also prefer running. i have run (when i actually do work out) for a number of years because most of my friends near my age due to various aging maladies, can’t. Recently, my doc said i shouldn’t run. Too old, too brittle, things might break. i am trying to obey. So i started walking again. On some of my walks, like Sundays, i take a route that gives me a view about one point east of north, or as the sailors used to say, “nor, nor, nor, by noreast.” The view is over the open space with Dictionary Hill,, the Sweetwater Reservoir, and Mount Helix in the background. 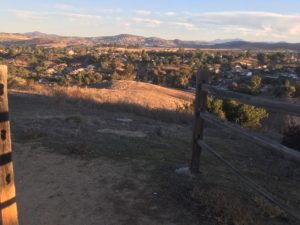 On walks, i usually think of Eddie Callis who has walked, oh i don’t know, about a half million miles in the early morning at the indoor track in the gym at the Lebanon First Methodist Church.

Then i come upon a view that is somewhat bittersweet. The canyon open space is where that crazy dog Cass, the lab, and his even goofier buddy (no, no, there was no “master’ involved in that relationship) roamed and Cass would chase coyotes who could not figure out just what that insane animal chasing them actually was, and Cass would roll an opossum, and damn near break my arm chasing a roadrunner, and leap over a five-foot, fat southwestern rattlesnake sunning himself on the walking path, and i smiled at the good memories and felt sad Cass and i couldn’t take those walks anymore.

But morning walk is over, cornbread and eggs are gone. It’s time to get to work.