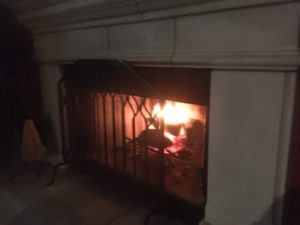 Things are turning into Thanksgiving, even in the Southwest corner. Yeh, most of the daylight hours hovered around seventy degrees, the mornings are nippy enough to require at least a wind shirt for early golf, and i can have a fire on the hearth at night. In fact last night, i finally convinced a skeptical wife it was cool enough to have our first fire in the family room fireplace. She still remembers in the early nineties when in early October, i opened up all of the windows and turned on a fan so it would be cool enough to have our first fire of the season. i have been politicking (the only politicking i think i have ever done after junior high) since mid-October this year, only to have her shake her head, perhaps derisively. But last night…ahh, last night.

So this morning, we started getting ready for Thanksgiving. There’s a whole bunch of stuff i might write about this later and will post my annual post about smoking my turkey. However, this morning, i started thinking about coffee again. i have begun a post like this several times, but discarded them because of distractions. It seems i have a lot more distractions lately. But today, i vowed i would finish this one when i admitted i have become a coffee snob or aficionado or nut or something. i find this strange.

i grew up where children were not allowed to drink coffee until they were in their forties…No, not really. But i’m pretty sure i didn’t have coffee in our house until i went to college. This could have been my choice because football, basketball, and baseball were my top priorities — oh, okay, girls were right up there as well — and alcohol, coffee, and even cokes were avoided until my after my senior year. i believed they were detrimental to my fitness.

i’ve more than made up for those lost years of coffee drinking.

My father was a coffee drinker. He had a cup or two with every meal, and it seemed he drank coffee almost non-stop at work. Until he was in his late eighties, i didn’t think his coffee drinking impaired his ability to sleep. It was then, on my parents’ annual winter trip to the Southwest corner, that he told me he had to not have more than two cups after dinner or he would have difficulty getting to sleep. Knowing him, i think that meant it took him ten minutes to fall asleep rather than his usual three seconds.

And he never, never put anything in his coffee. Black.

When i went to college, i needed to stay up late. That is when i started tossing back the coffee. Black.

Then came my Navy  years. On ships, i drank coffee pretty close to 24/7. When i was awakened for the mid (00-0400) or the morning (04-0800) watches, the first cogent thought i had was after my first cup of coffee. On watch, whether it was the bridge, Combat Intelligence Center (CIC), or main control, my coffee intake was pretty much non-stop.

i eventually learned the best coffee on the ship was in the fire rooms. The water was better. The worst coffee on the ship was the wardroom. Oh, it was okay at breakfast right after the stewards (initially) or mess cooks (later when the Navy once again screwed things up by making it nicer and getting rid of stewards: they thought it was demeaning apparently) made a fresh pot. There might be two fresh pots at breakfast. After that it sat in the pot, boiled down to a black tar like stuff that could eat its way through titanium. So, i drank it, pretty much continuously. Now, i have four or five cups from wake up time to mid-morning and occasionally one cup after dinner. That sleep thing, i’ve discovered, is more difficult for me than it ever was for Jimmy Jewell.

Our house growing up had either Maxwell House (“Good to the last drop”) or Folgers in cans, very convenient for storing other stuff after the coffee is gone. i didn’t know there was any other kind. i found out the coffee on ships comes in bags, large burlap bags (or did). i couldn’t tell the difference between Folger’s, Maxwell House, or Navy coffee.

Somewhere during all of this when i wasn’t on a ship, i had to shop for myself. The array of coffee choices was impressive, of course, nothing like it is today. i would stare at all of the options, look at the grinder installed in the shelves with the grounds covering the machine, shake my head and buy…yep, Maxwell House or Folgers. i liked the cans for storing stuff.

Then somebody took me to Starbucks. i didn’t like it. It tasted bitter to me. Still don’t like it. Of course, this is about when adding stuff to your coffee became an art. People liked this stuff they did to coffee because they had cool names like “café latté,” or “espresso.” They put all sorts of junk in it to, i presume, make it taste not like coffee.

My wife has turned this into a morning ritual close to matching high mass, or a television sporting event with all of the commercials and talking head time, in the required amount of time to make her “coffee.” She has evolved from stirring her cream to getting a small gadget that whirred on the end of a small rod and “frothed” her milk or cream, now even more upscale (i guess) with almond milk, which makes me try to imagine somebody crushing nuts…no, no, no: almond nuts to get milk. But that wasn’t good enough. She found something that resembles a small nuclear reactor that really “froths” her almond milk. And this is the one reason i appreciate almond milk: unlike real milk, it does not solidify and cling to the side of the reactor like it melded into the teflon interior surface and required more time for me to clean than all the rest of the breakfast dishes.

She grates chocolate into this mixture. Then she adds store bought creamer — no, i don’t know what flavor; i’m guessing vanilla. Then she uses some cinnamon powder that she shakes out of a round cardboard container. i think that’s it, but i’m not going to inquire…oh yes she puts her coffee in it. i think the coffee is about two spoonfuls with all that other stuff.

Many of my friends are into this stuff as well. i guess that’s because they either like Starbucks or they are a lot cooler than i am. They have bought these things that remind me of a 600 pound steam plant found on Navy destroyers, which make Rube Goldberg contraptions look simple. They have latté machines. They have espresso machines. They have combination latté and espresso machines. Some of these things cost about as much as the national debt. And of course, they have bought the stuff that will allow them to make a “mocha chocolate latté.” Now what could be cooler than that? Of course, it makes me want to barf.

Sorry. i admit i’m a hick or a tar or something that definitely doesn’t qualify as cool.

i also have a different take on “espresso” coffee. You see, i took an ad hoc team to a Turkish destroyer in Izmir, Turkey in 1972. There were a half-dozen of us sent there off the USS Stephen B. Luce (DLG 7) to help the Turks with maintenance on various equipment aboard their old Gearing class destroyer. The ship was the former USS Forrest Royal (DD 872), which they had bought from the US several years earlier. Being the officer heading the team, i was invited to the wardroom by the captain. They served espresso. Drinking that espresso was like throwing a red hot anvil down my innards. My tiny cup was strong enough to wipe out a herd of buffalo.

Although in a pinch i might have an espresso as it is much preferable to a latté, but i keep my Turkish coffee experience in mind.

But i too have fallen prey to coffee snobbery. You see, about twenty years ago, i went into work early. There’s this guy who had gotten back from bicycle racing in Spain and opened up a portable kiosk on the road i took for work. His name was Donny. Donny, being a pretty straight forward guy (but cool), named his operation “Donny’s.” He opened at 5:00 a.m., about the time i passed by. i would stop and get a medium cup of coffee. i liked it. Black, of course.

Donny has grown from the kiosk into “Donny’s Café” and gets a big crowd every day. He and his wife make bagels and stuff for breakfast and sandwiches for lunch, along with every kind of coffee drink imaginable with several different kind of coffee beans.

He opens at 6:00 a.m. now and that’s okay with me because i don’t go into work anymore, although i would stop there on Friday mornings on my way to our early tee time if he were open earlier.

By experiment, i discovered i could tell a difference in Donny’s coffee and Maxwell House or Folger’s. i tried his different beans and found i much preferred his Columbian. When i quit going into work, i began to buy my coffee from Donny and brewing it every morning. Columbian. Black.

Then one day, i asked Donny about where he got his coffee. Well, there’s this outfit down in National City, near the Naval Station and the barrio. It’s called “Café Moto.” They roast their beans every morning and deliver them to Donny and others. So i asked him what is the freshest way to drink coffee at home. Donny told me to buy whole beans enough to last less than two weeks, keep them in a dark, vacuum sealed container, grind them just before brewing. If the coffee lasts two weeks or longer, move it to the refrigerator, or the freezer.

Bought an inexpensive grinder. i don’t think i ‘ve ever had to put my coffee in the refrigerator.

Then i had some French pressed coffee in Paso Robles after lunch and wine. Sold. Bought an inexpensive French press. 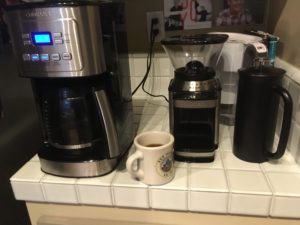 Last Christmas, Maureen gave me a super duper, double micro-filter French press. i kid you not. Then about two months ago, i bought a super duper grinder with all sorts of settings for the amount of grind. Donny told me one should use a “coarse” grind for a French press.

So now, i am a coffee aficionado. No, not really, but i do like my Columbian, whole bean coarse ground each morning and brewed with a French press.

Come to think of it, it now takes the morning coffee preps between Maureen’s regular brewed coffee and my French press version about as long as it takes for jury selection for a major trial.

But i sure wish i could get some more of those coffee cans. i’ve got a lot of stuff to store.