There is one track on the album that keeps playing over and over again in my mind. “Our House” just made me want to spend my life in our house. The album came out in 1970. i was plying my way between Sasebo, Japan; Pusan, Korea; and Qui Nhon, Nha Trang, and Cam Rahn Bay, Vietnam on a USNS ship (first the USNS Geiger and then the USNS Upshur) carrying Korean troops back and forth between RVN and ROK.

“Our House” gave me visions of the way things ought to be: “Our house is a very, very, very fine house with two cats in the yard, / Life used to be so hard, / Now everything is easy ’cause of you and our— / La, la, la.”

I imagined “our house” to be shared with a number of women with whom i had shared special times…no, whom i loved. Then, i met someone and it all seemed to fall into place…for a while. Maybe the problem was we only had one cat in our yard until the very end, nor a fireplace until it was too late.

So then, i led a good life of a single Navy officer. i was a rambling man, saw a whole bunch of the world, met a lot of women, worked hard, played hard, and didn’t have any cats, or dogs for that matter. i still longed for “Our house is a very, very, very fine house with two cats in the yard.”

Then with stories enough to make you think it was fate, i met Maureen and we married. It has been good.

This afternoon, we went through the drudgery, the uncertainty, the pain-in-the-ass of meeting with our tax accountant. It turned out well in spite of our concerns as it always does.

We got home, and i, having been crunching paperwork in distress since all of yesterday and since O-dark thirty this morning, took a nap. i had to clean up the paperwork and set it up for next year’s ordeal, and i set down to find Bill Cook’s post of Howlin’ Wolf. Took me back a long, long way.

Then i went out front to move the trash cans to the side yard after pickup. There in the front yard were Oscar and Luna, “two cats in the yard.”

Oscar and Luna are not really our cats. They belong to Luis and Regina Gonzalez and their two daughters. But they have become our “two cats in the yard.” In this photo, they are surveying their realm from the top of the berm in our front yard. i disturbed them, but not much. Oscar and Luna spend a lot of time in our courtyard. They like to get up on the outdoor furniture to look in the window and watch in amazement at the luxuriating of our indoor cats. Sometimes they hiss. 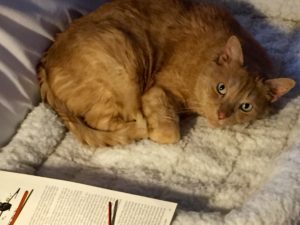 This is Dakota. Dakota was the cat Sarah rescued when she was a sophomore at San Diego State. Because of the college area where Sarah lived, Dakota became an indoor cat. She is the best suited cat for an indoor cat i’ve ever known. Sarah left for Austin. She planned to take Dakota with her so she got Maureen another cat to have when she left. Maureen wanted to name him “BW” or some other innocuous name, so Sarah came up with “Bruce Willis.” Perfect. Not to be denied, Maureen calls him “Brucie.” 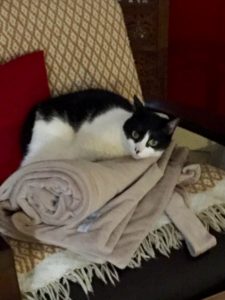 Bruce has not yet decided if he likes being an indoor cat, but he’s getting used to it. He leaps up on the sill and hisses back at Oscar and Luca when they peer in the window. None of them really have determined what is going on and why two are in and two or out. It doesn’t seem to bother them very much.

As i walked back in contemplating a long night of beating the system and setting up tax recording for the next year, which will never be quite as good as i envisioned, i remembered the boys on the couch on the porch in the album cover photo.

“Hmm,” i thought, “i got two cats in the yard and two in the house. Is that doubling down?” And i remembered the lyrics…okay, okay, i remembered most of the lyrics but had to look them up to be sure:

I’ll light the fire, you place the flowers in the vase that you bought today.
Staring at the fire for hours and hours while I listen to you
Play your love songs all night long for me, only for me.Come to me now and rest your head for just five minutes, everything is good.
Such a cozy room,
The windows are illuminated by the evening sunshine through them,
Fiery gems for you, only for you.Our house is a very, very, very fine house with two cats in the yard,
Life used to be so hard,
Now everything is easy ’cause of you and our—La, la, la

Our house is a very, very, very fine house with two cats in the yard,
Life used to be so hard,
Now everything is easy ’cause of you and our—I’ll light the fire, while you place the flowers in the vase that you bought today.

It is now near bedtime. Maureen just came in and gave me a kiss before she headed for the bedroom. We ate supper as usual on dinner trays in family room. Tonight,  unlike the colder evenings of several weeks ago, we ate without my lighting a fire, but she did place some flowers in the vase. She always has flowers to place in the vase.  i will follow her soon and hold her before we both go to sleep.

And our house is a very, very fine house. Life used to be so hard (but not really hard), but certainly everything is easier because of her.

2 thoughts on “Thank You, Crosby, Stills, and Nash”