i didn’t really miss it yesterday.

i just had too much going on to pay my proper respects, so i delayed it until today, which i thought was appropriate because it was St. Patrick’s Day.

Yesterday, Ray Boggs (what a lovely Irish name) would have been ninety-nine years old.

Yes, i married his daughter. He seemed to be pleased, but i wasn’t really sure about what he thought about me. After all, i was a sailor boy. His daughter was…no, is a beautiful, sophisticated young woman. And i was from the South.

But soon, Ray and i had our own thing, not just in-laws, but best friends. We did projects together, we played golf together. We watched movies and sports together. We argued about the best route to get where we were going. And yes, to be perfectly honest, we drank a lot together.

Ray loved to play golf with my friends and me, especially when it was at Miramar, Admiral Baker, or North Island. This was not because of the golf, mind you. This was because he would go early and have SOS (okay, who besides military folks, especially Navy folks, knows what SOS is?) for two dollars.

Watching Ray and my father work together was something magical. Ray was the consummate engineer. Everything was planned out, drawn on engineering plans, all preparations complete, including tools, supplies, safety checks, etc., etc. My father shot from the hip, starting a project with an idea in mind, adjusting when in mid-stream he realized his original idea needed to be modified to work better, finding a tool he didn’t have was needed and either stopping to go get the tool or, more likely, figuring out a way to get it done without the tool. The two of them re-tiled the kitchen floor in our first house. Ray would present his plan, and Jimmy Jewell would point out something in the plan wouldn’t work. They would argue…hmmm, discuss the problem, go out to the garage refrigerator and get a beer, stand there and talk for a half-hour, seldom about the work, and go back in and resume the tile job. Within an hour, they were back in the garage.

The tile job was perfect.

i have hundreds of stories about Ray. i love them all. All of them display how much he enjoyed life.

Yet the thing i always remember about the French-Irish, Boston-born, Wyoming-raised, self-made man, was his humming. Yes, humming. You see, a number of times Maureen and i would go out for the evening, we would take Sarah when she was between one and two over to Taft Street in Lemon Grove to the house of which Ray designed, engineered, oversaw the building of, and then did most of the interior work on himself.

i still remember him sitting with Sarah on his shoulder, her cheek next to his. Ray would hum in that gravely voice, low and rhythmic. i could almost hear the vibration, tremolo i think is the word. Sarah would go to sleep and Ray would rock gently in his chair, continuing to hum.

i miss him, but i always have the memory of Ray and Sarah. 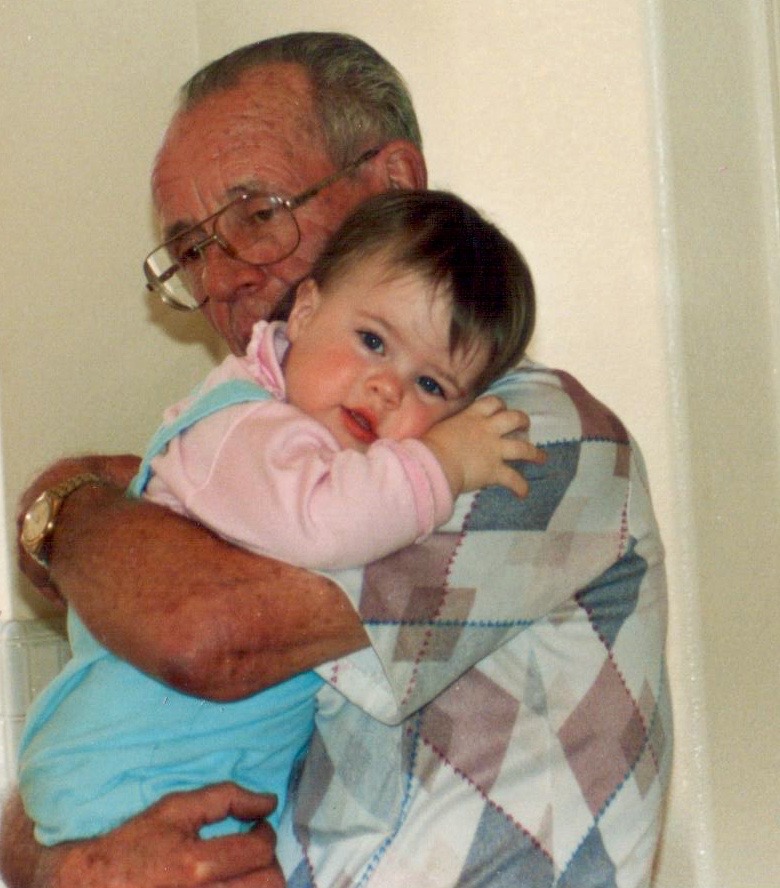