i had difficulty making out my aunt’s cursive written word on the back of the photo.

It was a single photo amidst many in the envelope my cousin, Nancy Orr Winkler Schwarze, had sent me a couple of years ago. As the pile collected on my desk, this one intrigued me.

i had heard about my aunt Evelyn Prichard at Cumberland. She was a star student, a basketball player, a campus leader, and attractive enough to win the affection of a wonderful man, James “Pipey” Orr whom she married after they graduated. She also cooked fried chicken for her grandfather’s breakfast, walked two miles to Cumberland from his home on Hunter’s Point Pike, attended her morning classes, returned to her grandfather’s where she cooked his lunch, returned to Cumberland for afternoon classes and basketball practices, and at the end, walked back to her grandfather’s where she cooked supper with the help of her younger sister (my mother), her youngest sister, and probably not a great deal of help from my eight-year old uncle.

So i was intrigued with this photo and the one word and the year written on the back. i thought maybe it was “Debutantes, 1931.” The cursive writing became smaller and difficult to make out at the end. The lettering was small and neat, not as neat and orderly as her two sisters wrote, but it contained the same characteristics. The letters looked like the perfectly formed letters, large, above the blackboards in every classroom of every grade in elementary school that i remembered. That’s what their cursive looked like. My sister’s writing had that too. My brother’s also, but he formed his with a backward slant, something i had always intended to ask him about. Toward the end of this exhibit of cursive reminded me of mine, hurried, different, some suggestion of an older style or at least a cruder style. This has been amplified in my later years, this recklessness with the cursive lettering. Perhaps it was college that did that to me. i wondered if it had done that with my aunt.

i asked Maureen to decipher the lettering. She immediately decided it indeed was “Debutants .” i should have dropped it there, but i kept looking. i think the old news reporter kicked in with Coach, JB Leftwich, looking over my shoulder.

i got out my desk magnifying glass i had claimed from my father-in-law’s estate. Under the glass, the writing looked like “debutees.” It seemed like a good word to me, but it was unfamiliar. i looked it up. Google, where else?

It was French as i had guessed. The plural was also feminine, meaning “to start,” “to debut,” to make one’s debut.”

And there it was.

She and her friends. i think i recognize one or two, but i will not hazard a guess as to whohe fr these 1991 Cumberland University students were. i’ll let my Lebanon friends determine if they can put names to the frosh faces.

It seems like a simpler, magical time to me. But as with all periods of history, including the current times, it was the best of times; it was the worst of times. Hmm…i think i’ve read that somewhere else before. That’s my Aunt Evelyn Prichard Orr on the left. 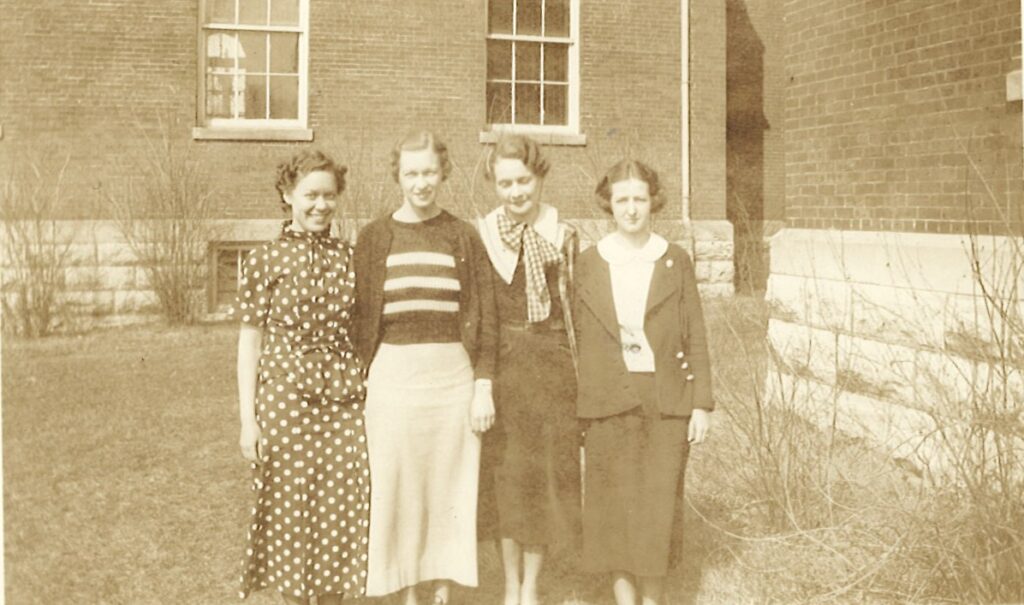