i posted two photos on Facebook Monday. i had them scanned by a lady who works hard at her profession. The photos were of my great grandparents, Hiram (Buddy) Carpenter Jewell and his wife, Sarah. i believe they were taken in the 1870’s. 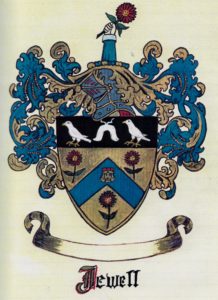 i posted them on Facebook so relatives in the Jewell line could have access as these photos were not included in The Jewell Book, a large volume collected by Dr. Harold Jewell and his wife Mary Lee Snider Jewell. Published in 1994, Dr. Jewell and Mary sought information from all family members they could find and traced the lineage of our Jewell family from the earliest settlers in this country for creating this rather unique book.

When i entered the Facebook post, Teresa Steward Deathridge responded with “Share the stories!” This is my first attempt to do that for Teresa and family members.

i have been told by one of my parents or learned from some source i don’t remember, we come from a sheriff in England around the 1400’s, i think. It was from this family where a “Jewell” crest originated. i hope to research this and find out what each part represents. i am perplexed about the upside down white bird might mean. But this is only a preamble to the first of my “Jewell” stories here.

Hiram Carpenter “Buddy” Jewell was born on Knight’s Creek near Statesville, Tennessee in 1844. In 1861, he enlisted in Smith’s 2nd Tennessee Calvary for a year of service. The next year, he re-enlisted with Company D in the 8th (Smith again) Calvary of Tennessee in Bardstown, Kentucky and served until he was “paroled” at the end of the war.

While in Kentucky, he met a woman who became pregnant by him. Here the story gets a little hazy. i’m not sure if Buddy knew she was pregnant. Regardless when he was mustered out, he returned to Statesville and became a farmer. The Jewell Book has a curious paragraph, which would be a puzzle except my parents told me their version of the story. As usual, i got it a little confused, but with the help of their recounting and The Jewell Book, i think i’ve got it about right.

His (Hiram’s) oldest son, John Jay Jewell, was born to William Carpenter and Mary Jane Sutton (a strange wording and even stranger considering William’s last name and Hiram’s middle name were the same) in Kentucky Aug. 10, 1862 (This would indicate Buddy met Mary Jane during his first enlistment and makes me wonder if he stayed another three years why they didn’t marry). John Jay returned to Tenn. at an early age and became a merchant, lawyer, and outstanding citizen in the Statesville community.

My parents expanded on this curious paragraph with an explanation. After Hiram and Sarah were married, they received word about Mary Jane being extremely ill and help was needed. Sarah directed Buddy to go to Kentucky and bring back the ill Mary Jane and the son, John Jay.

Who alerted Buddy and Sarah to the crisis? Where was William Carpenter, the father, at least the one listed in the curious paragraph? Did Buddy tell Sarah beforehand of the tryst (?) he had with Mary and the son born out of wedlock?

The answers to my questions matters little compared to what my parents told me. Buddy brought the two back from Kentucky to Statesville. Sarah tended to the ill Mary until Mary’s death — i could not find any date there and have considered returning to the Jennings Cemetery to see if there is a plot for Mary Jane Sutton near where Buddy and Sarah are buried. Then according to my parents, Sarah raised John Jay as one of her own.

i keep trying to imagine those times in that hamlet at the conclusion of the great war. i think of Faulkner’s trilogy and the Snope’s and the Sartoris’s and again imagining how they lived in a world of conflicted alliances, beliefs, life itself turned upside down. And i think of the dignity and the goodness that survived, that put humans, flawed yes, but humanity rising above even the boundaries we put upon ourselves today. And i beam with pride that Sarah Jones Jewell arose above the pettiness of the times and the cultivated beliefs to care for a woman she only knew as someone who had a son with her husband but nonetheless took care of her in illness and took the son not hers under her wing.

Sometimes, in our history and even in our lives today, goodness prevails.

That is a comforting thought. 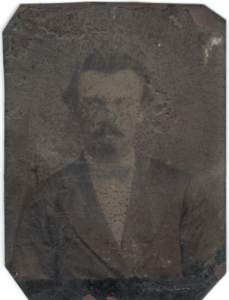 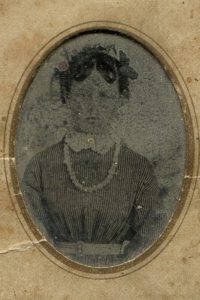 1 thought on “A Story from the Jewell’s of Yesteryear”