Thirty-three years ago on a day like today though much less humid, a sea breeze reached the house on the corner lot where Taft Street intersects with Hughes Street. The temperature in the afternoon reached 95.

The backyard of the house was spotted with one white pavilion tent and about a half-dozen serving stations. The wedding took place in the northwest section of the backyard, Reverend Joe Jewell presiding.

He read the vows written by his brother, the groom, and edited by the bride:

We are here today to celebrate a union.

Maureen and Jim have traveled different paths to meet at the opportune place to become a perfect union. Their love began as a friendship and has grown far beyond what either had dreamed possible.

Their wish today to be a celebration, a joyous day of laughter and warmth; they wish to share their elation of finding each other with those here today. They hope the emotion of gladness they feel will overflow and others can feel the wonderment and peace of togetherness they share.

The light of love lit by Jim and Maureen has allowed them insight into previously  unseen corners of their lives and to see down corridors of their future.  This light also has revealed a depth of emotion that defies explanation. It has cast the light of clarity on relations with other people important in their lives, redefining and deepening those relationships. In their relationship with each other, this light of love has allowed them to experience a depth of feeling coexisting with an openness and sharing they have not attained before.

This union does not create walls but invites freedom to Maureen and Jim to be who they are with each other and with others with whom they have shared. This wedding is a symbol, an announcement, a consecration of a relationship that has been blessed as a union by the spirit and power that transcends us all.

This ring is a permanent symbol of this union. It signifies the love, adoration, and friendship between these two people. Its never ending circle is a symbol of the extent of Jim and Maureen’s love.

It should be remembered the ring is a symbol and cannot completely capture or represent the love and commitment these two share with each other.

The lord bless you and keep you; the lord let his face shine upon you and give you peace.

When i reread and copied those vows today, i kept thinking about how gracious my brother was in reading them without at least chuckling. But he delivered the words with feeling.

It is a bit smarmy in parts and a bit overblown. The writer and editor were in love and wanted to share that with all of their relatives and friends. So i think that is perfectly fine. 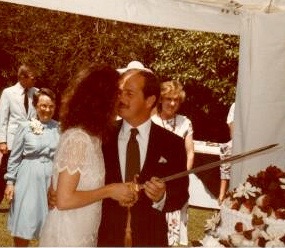 The above photo is sort of perfect. We are cutting the cake covered with chocolate covered strawberries with my Navy sword. My mother is in the background to the left of Maureen.

We have now been married for more than half of Maureen’s life. That is amazing to me. i often think it was good to have married each other later in life than most. i think it makes us more tolerant of each other and with the other people we hold dear.

We have settled (somewhat) into our routines of an aged relationship. The length pales into comparison to my parents’ seventy-five years of marriage. Still i think our length of marriage shows our staying power and it’s just fine, just fine.

And i, as i have pointed out a grunch of times, am a lucky man, a very lucky man and have been so for thirty-three years.

2 thoughts on “A Pocket of Resistance: Staying Power, Thank God”