Pete and Nancy Toennies could not join us for our golf round celebrating our thirty-third anniversary yesterday.

They have a dog named Cody who is in the last round of living. Pete and Nancy are in the process of making the “when?” decision, one of the most difficult decisions i have had to make twice and is a driving reason for us not having a dog until i am confident the dog will outlive me: i don’t ever, ever want to make that decision and live through the consequences again. We did go out for dinner with the Toennies last night, eating at a tony Coronado restaurant on the outside patio. I feel deeply for Pete and Nancy in their dilemma .

In their golfing absence, we were joined by Mark and Andy, two young Navy Surface Warfare Officers. Mark is the “OE” division officer and the Network Security Officer aboard the USS Milwaukee (LCS 5) (i think that is right: i apologize Mark, for my bad memory; i will correct this when we run into each other again if i got it wrong). Neither of Mark’s billets nor his class of ship was around when i was on ships.

Mark played baseball for Penn State. His golf game reminded me of mine years ago except his game is much, much longer. i told him of this driver i had in the late 1980’s. It had a graphite head and a graphite shaft. My friends named it “The Scud Driver,” Like the missile the Iranians had around that time, my tee balls hit with that driver would go a long way, but no one knew where they would land.

Andrew played baseball for Concordia University, a small university in Nebraska. Andrew is from near Galveston, Texas, and is a big Texas A&M fan. Of course, i was the senior Navy officer at the NROTC Unit at Texas A&M from 1976 to 1979, one of my two Navy shore tours. Like Mark, Andrew has a lot of potential as a golfer. We might get in nine holes before he finishes his two-weeks of training here and heads back to Sasebo Saturday. Sasebo is one of my favorite liberty ports of all time.

Mark’s girl friend, Andrea, moved to San Diego from Croatia about six months ago. She rode with Mark for our round.

It was good to connect with two young officers who were me almost fifty years ago. i told them a bunch of sea stories, and they seemed to enjoy connecting to the past Navy.

It is a different Navy, but it has good folks, and there is always hope when there are good folks involved.

The afternoon made me nostalgic.

This morning, i opened an email Pete had sent me yesterday. 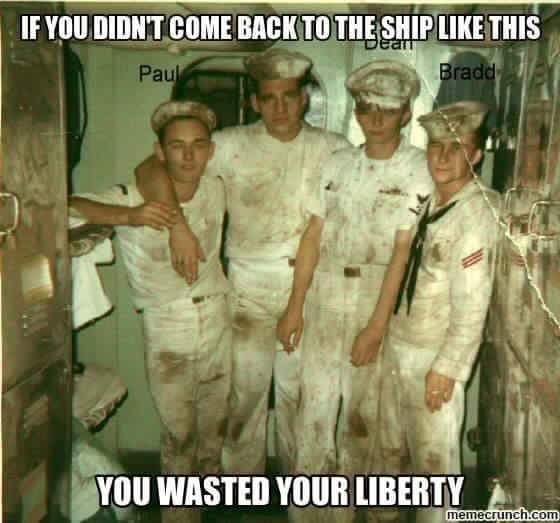 The photo was a reminder of the way the Navy used to be. It also reminded me of my third class midshipman cruise.

In 1963, the other ships in the Intrepid (CVS 11) anti-submarine carrier group went to Halifax but the Lloyd Thomas (DD 764) was sent to Sydney, Nova Scotia for Canada’s Independence Day (July 1). In the parade, six midshipmen, including me, escorted the six parade “princesses” through the streets. For a week, we wandered the town, drank a significant amount of Carling Black Label beer (“Hey Mabel, Black Label”), and met some nice young ladies.

On the last night of liberty, we worked out a plan with the first class midshipman who had the duty. Liberty for seamen, firemen, and third class petty officers expired at 2200. First and Second Class Petty Officers (Acey-Ducey Clubs, remember?) had to be back to the ship by 2300. Liberty for chiefs and the third class midshipmen  expired at midnight. Officers could stay out until the next morning. Knowing the first class middie would be the quarterdeck officer of the deck for the midwatch, we worked a deal where he would cover for us and a half-dozen of us could get back as late as 0400 without getting caught.

We arranged a party with six of the girls we met at one of their homes on the outskirts of Sidney. It all went well and everyone was having a good time. Then the six midshipmen returned to the ship around 0200 where all hell was breaking loose.

Most of the sailors on liberty had gathered at the dance hall in the middle of town. They were dancing with the local girls, and some of the local boys took offense. Around 2030, a fight broke out between a local and a third class petty officer. The fight grew until it became a huge brawl in the middle of downtown.

Liberty was cancelled. Shore patrol was beefed up with crew from the duty section, and all hands were ordered back to the ship . The quarterdeck watched was doubled and the executive officer was on the quarterdeck from when news of the fight reached the ship until the captain returned.

Wide-eyed from watching the bloody sailors with soiled and torn uniforms (much like in the photograph) straggle back to the ship, we were stunned when we found our first class midshipman was not on the quarterdeck, replaced by a more experienced OOD and the XO. When we reported aboard, we were immediately put on report.

We hovered around the quarterdeck watching the sailors return in small groups or one by one.  One third class petty officer passed us by after crossing the gangway. His head and arms were splattered with blood, along with his service dress white uniform which was in tatters. He was obviously very drunk and without his dixie shop (sailor’s cap).

When we asked him what happened, he said some guy hit him with a chair, and they had a donnybrook. We then asked him if he was okay. He smiled. A front tooth was missing, and then he answered, “I came back, didn’t I?”

We were further surprised when we learned the captain had not returned. He had been a submarine commanding officer before becoming the captain of the Lloyd Thomas and preferred going on liberty with the chiefs rather than the officers. Finally around 0315, his sedan pulled onto the pier. As the executive officer walked to meet him, the captain, being held up and helped aboard by the chiefs, reeled across the brow, obviously four sheets to the wind. He and his chiefs had been to a hole in the wall and been tossing them down since early evening unaware of the brawl or liberty being cancelled.

When the XO informed him of the events, the captain rolled his eyes and yelled, “Well hell then, liberty call for all hands.”

Of course, the XO immediately nixed that and helped the captain, with the aid of the chiefs, to his cabin.

At 0800 the next morning, the Lloyd Thomas got underway. The foggy harbor area was thick with small vessels at anchor including several Japanese fishing ships. The captain took the conn and was giving orders to the helm and lee helm, obviously a little woozy from the previous evening’s activity. He sped up to standard speed too early and turned to starboard a little late, scraping the side of one of the Japanese fishing ships. Looking down from the signal bridge, my watch station for sea detail, i watched a half-dozen or so Japanese fisherman jumping, diving, or falling into the water.

We continued out of the channel to rendezvous with the Intrepid and her other escorts.

The midshipmen, including me, received ten hours of extra duty for missing liberty expiration. My ten hours of extra duty was spent mostly cleaning and painting hot, dank, and out of the way spaces. i was told the State department had sent a letter of apology to Nova Scotia and Japan, but all concern apparently ended there. The captain, then a commander, made captain. The incident, including the collision at sea, did not hamper his career. He did not give himself or his chiefs any extra duty.

Yep, it ain’t the same Navy. Perhaps, perhaps, the new Navy is better. It is certainly less boisterous.

i’m glad i was in the old Navy.

1 thought on “A Pocket of Resistance: The Old Navy”