On Facebook today, Christine Ransom Phillips posted a photo of Roy Rogers and Trigger in their prime. I shared the post with some of my fond memories, and the responses have been nearly all favorable with one exception.

But i have a shared memory that will go a long way to show what kind of man Roy Rogers, nee Leonard Franklin Slye, really was.

This memory was the legendary JD Waits’ story he told to Maureen, my mother and father, and me at our home in the early 1990’s when JD brought over his wife, Mary Lou, and his mother, Wanda Pearl for dinner.

Wanda Pearl, in her early 80’s, adored Roy Rogers for as long as JD could remember. So when she came to visit JD and Mary Lou from her home in Houston, JD thought she would be pleased to visit Roy’s Museum in Apple Valley. She was. 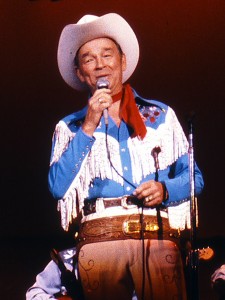 As the two arrived as the museum opened, no one else was there. But as they entered, there was Roy in full cowboy regalia. He gave Wanda Pearl a personal tour of the museum with JD tagging along behind. After the lengthy tour, the three of them walked outside.

As they were getting ready to leave, Wanda Pearl turned to the King of the Cowboys and asked, “Mr. Rogers, would you mind if my son took a picture of you and me together?”

Roy took off his white Stetson and replied, “Why little lady, I would be honored.”

Wanda Pearl still has the framed photo in her home.

JD also turned me onto Roy’s CD, “Roy Roger’s Tribute,” a collection of Roy’s hits song solo, with Dale, or the Son’s of the Pioneers. Roy sings with a bunch of country music stars, and his son has a tribute song. Naturally, the last song is Roy and Dale singing “Happy Trails.”

i listen to it a lot. Sarah and I during her middle school and high school years would put in the car CD player and sing along until we reached our destination. If you have never heard it, you should at least listen to the songs.