This is another of the poems omitting Willie Nod. i wrote it in 1978 while at Texas A&M in College Station. i will refrain from describing my situation because it is not something i like to talk about. This poem was to Blythe as all of them were, adding Sarah to the “to” list after 1989. But this one was also to me. i would like most people i know to consider the poem’s intent. 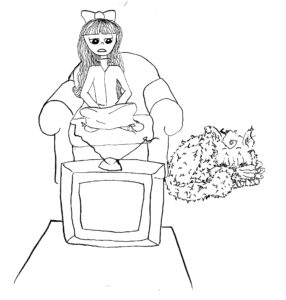 The Cat was fat;
his name was Reginald Are-a-Fat
He cackled at birds,
lazed in the sun
most of the day.

Reginald loved a little girl.
They both belonged to a couple,
named Poindexter.
The girl was Rebecca Poindexter.
Reginal followed Rebecca
everywhere Rebecca cared to go,
cackling and lazing in the sun while
waiting for Rebecca. 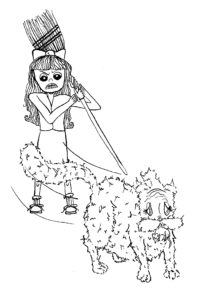 Rebecca did not appreciate Reginald’s love, but
enjoyed his company and laughed at his cackling.
Reginald had a lot of cat in him.
One day, he did a very cat thing while waiting for Rebecca
outside her friend’s house.
Reginald caught a mouse,
had it in his mouth when
Rebecca came out,
showing it proudly to her.
Rebecca was mad that
Reginald could do such a cat thing.
She swatted at him and chased him away.

Reginald Are-a-Fat was hurt and scared,
running to hide in the woods nearby.
He did not go back to the Poindexter’s house that night.
A big thunderstorm caught Reginald in a tree.
He was wet and afraid.
The Poindexter’s called for Reginald.
They coud not hear his cries above the thunder.

Rebecca cried through the night,
afraid she had driven Reginald away for good. 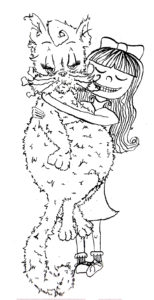 Cats, however, are very wise animals,
especially Reginald Are-a-Fat, the fat cat.
In the morning, the thunder, lightning and rain quit;
Wet Reginald climbed down from the tree,
dashing to the Poindexter’s door
just as Rebecca was leaving for school.

Rebecca grabbed Reginald and hugged him.
She understood his love and loved him in return.

And they lived happily ever after.

Don’t forget that no matter how a story ends, everyone has a chance to live happily ever after, if they will it so.

2 thoughts on “Reginald and Rebecca”