As noted earlier, BMC Jones was my entry into chiefs taking care of division officers. Ensigns and even Lieutenant Junior Grades (LTJG). BMC Jones was my chief when i was an ensign and first lieutenant on the good ship Hawkins.

We had a chiseled seaman apprentice in first division, who also thought he was a good sea lawyer. 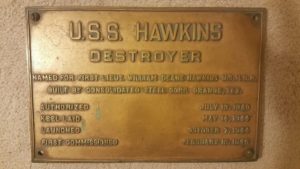 The Navy was different back then. One difference was liberty cards. Normally the ship was in three duty sections, of which one  took the duty and remained on board every third day. When liberty call came, the two enlisted duty sections not on duty had been given their liberty cards, about the size of business cards, to show to the quarterdeck watch, a requirement before being allowed to leave the ship. These cards were usually passed out by the division’s leading petty officer at quarters each morning. If you didn’t get a liberty card, you didn’t go ashore.

Seaman Joe Shit the Ragman (a title we gave problem junior enlisted) had done something wrong and the LPO, BM2 Carrier, had not issued the sailor a liberty card even though he didn’t have the duty. To make it worse for Ragman — Back then, junior enlisted were addressed by their last name only. Petty Officers could be called “Petty Officer xxx,” but usually called by their last name only as well; Chiefs were called “chief,” “senior chief,” or “master chief.” Junior officers were called mister, like “Mister Jewell,” until they made commander, then they were called by their rank, as in “Commander Jewell” — it was Friday. That meant Ragman had to stay on board for the weekend. This was an unauthorized but common form of a sub-rosa justice system. Ragman, the sea lawyer, took offense.

Just before Friday liberty call, i had walked down to the first division berthing compartment in the after section of the ship. i was checking the material condition and the state of the berthing compartment. Ragman saw his chance to haul out his sea lawyer skills on a green ensign. He was ranting about the illegality of not allowing him to go on liberty. i was mulling over how to handle this situational ethics situation (even though i had no idea a term for this kind of thing even existed): i wanted to support my leading petty officer; i was sure Ragman had deserved having his liberty card “lost,” but i also was supposed to uphold justice, fairness, and adherence to regulations.

As i briefly pondered my quandary, Chief Jones, who had been looking for me, slid down the ladder to the compartment. This wiry, small man, with a cigarette hanging outside of his mouth, stopped Ragman’s rant by merely holding up his left hand toward him. Then he asked me what was going on. i responded.

BMC Jones turned, grabbed Ragman’s blue chambray shirt with his right hand, pushed the fabric he had grabbed up to Ragman’s throat, and pushed him up against the bulkhead. i swear Ragman, all 180 pounds and six feet of him was quivering.

“Listen, you little shit,” Chief Jones said evenly despite being red in the face with veins pulsing, “If you ever pull that kind of shit again, i’ll see to it you never leave this ship. Ever.”

“Got that,” the chief concluded.

Then he turned to me and said to me, “Sir, let’s go up to the main deck. i want to discuss when we are going to retile and paint the main passageway.”

He turned and quickly ascended the ladder out of the compartment.

This ensign meekly followed, shaking my head in amazement.