Occasionally, Maureen will find some packaged watermelon at Ralph’s, which is what folks out in the Southwest corner call Kroger’s.

She likes to serve it with prosciutto and some fancy garnishes to guests for an appetizer before dinner. Ain’t bad. She also has been known to chop it up into cubes and serve it other fruits, even at breakfast. Ain’t bad.

There are a couple of other things she does with it, and…it ain’t bad.

Ain’t watermelon to me. i don’t quite know what to call it.

Watermelon has a history in my family. i have a photo to prove it: 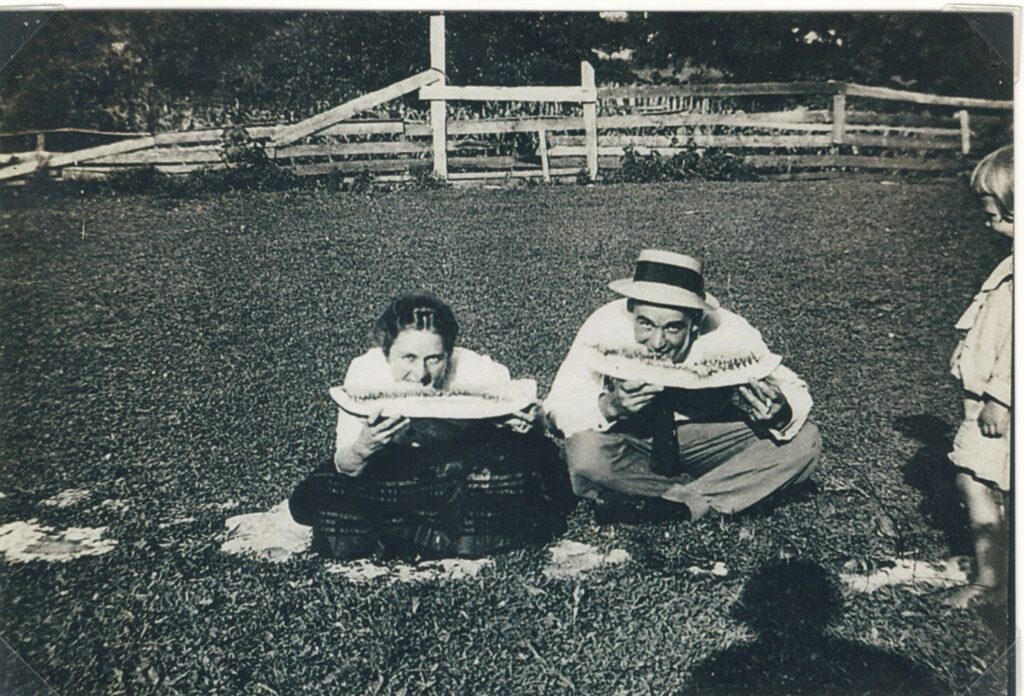 Those two folks chowing down are my grandmother, Katherine Webster Prichard and my grandfather Joe Blythe Prichard in their yard off of Hunter’s Point Pike. Judging my Aunt Evelyn’s age looking upon this feasting, i’m guessing this was about 1920 (the photo comes from a bunch my cousin Nancy Schwarze sent me several years ago; Nancy is Aunt Evelyn’s daughter).

My father got involved in watermelons. When he was in high school, he and a bunch of his buddies, and knowing those guys, albeit much later, i wouldn’t be surprised if Jim Horn Hankins was in on it, although Mister Hankins was a year or two ahead of these two. i’m betting the ring leader of the escapade was H.M. Byars. Only H.M. was mentioned by name when my father told this tale to me. He did not divulged the names of the others. It was watermelon season, probably September when they drove out to the Bostick Farm at the corner of Hickory Ridge Road and Blair Lane, coincidentally across Blair Lane from the farm of my great uncle and aunt, Wynn (“Papa” to me, siblings, and a bunch of cousins) and Corrine Prichard.

The gang parked their vehicles far enough away they would not be detected by the Bostick’s in their farm house. They made their way to garden and plucked a bunch of watermelons. They carried their stash into the woods, sat down, cut the melons with their pocket knives and dug in. Bad idea. They misjudged the state of the watermelons in the dark and the meat was still green. They had ruined a substantial bunch of ripening but not ripe watermelons.

The only good part of this story is they didn’t get caught.

When i was growing up, i don’t think packaged watermelon slices existed, and i’m sure they weren’t wrapped in plastic if they did exist. And they certainly weren’t available all year round, nor to my knowledge was there a seedless watermelon on earth.

When we ate watermelon, the whole melon was all that was available. So someone would slice the melons into wedges like the ones in the photo of my grandparents. The diners would head outside because you didn’t eat a watermelon in the house. Why? These babies had seeds up the gumpstump. Lots of seeds. And my mother was not going to have a bunch of kids spitting watermelon seeds all over of her house.

Therefore, we would grab our slices and head outside. We sat on chairs or blankets or the ground like my grandparents. We passed the salt shaker cause we ate our wonderful juicy watermelons with salt to taste. My taste of salt was always plentiful, and i would beg for another slice, with salt of course.

So when Maureen prepares some of those fancy watermelon things, i hope she doesn’t notice my raised eyebrow like my father would raise his when he was exposed to something questionable in his opinion. My mother’s raised eyebrow is the stuff of legend, and i would try to shrink into the wallpaper if her raised eyebrow was directed at something i did or said.

But after my clandestine eyebrow raising goes unnoticed (hopefully), i dig into Maureen’s watermelon extravaganzas. They really are good, tasty. But i long for those that came as whole melons and i want to go out in the backyard with a slice and chomp down.

It still wouldn’t be as much fun: no seeds to spit.