i am not a big fan of nearly all mandated holidays. Christmas, Easter, Fourth of July, and Thanksgiving. That’s about it for me. i do pay respects to deserving military folks on Memorial Day and Veterans Day.

i loved Halloween when i was growing up when the only decorations on all the houses were carved pumpkins, one, and good-hearted pranks were treats as good as the candy. i enjoyed the holiday when i could share it with my two daughters and grandson, but it was their joy i enjoyed, not mine. Halloween has gone overboard (so has Christmas) with the decorations, and when i see them i think how much better it would be if half the money spent went to help someone, some cause, or the national debt.

i have the same problem with Valentine’s Day when the price of roses goes out of sight, candy and cutesy card ads are pitched as a necessity, and you are shamed if you fail to buy several hundred of each. But with this past holiday and all of the preceding ones, i have always felt pressure. How to show my affection for those i love appropriately, tastefully. What if they don’t like what i offer? And now, Maureen has beautiful roses around our yard. Why would i or should i give her red ones? And i want to tell the folks i love with words or gifts when i get the notion, and i get the notion quite often, but i don’t like someone mandating i express that on a certain day.

So this year, i left. i mean Vandy baseball in the desert with life long friends is a strong draw for me. Not Maureen. She ain’t into desert. Now i feel guilty…just a little, but still guilty.

But as i went through the weekend, i was distracted.

First there was the drive: i enjoy long, alone drives. Don’t know why. i think my father enjoyed them, but nearly all of his was with my mother. Since Maureen has sworn off riding with me on long rides (due to some differences of opinion about what a road trip is supposed to look like and the cleanliness of out of the way gas station bathrooms. But that’s another story), my long ones are nearly always alone. Just me, the car, and the road.

This one began, as usual, in a time judged appropriate to miss most of the morning commute. For some reason, i did not resort to my iPod tunes or the radio. The entire trip. Just me and the car. After escaping the web of freeways, i headed east on Interstate 8 with the long gradual drive turned steep and winding over the the mountains adjacent to Pine Valley and Mount Laguna and Boulder Oaks — someday, i’m going to take the time to head out on CA 94, not I-8, to experience road travel through the mountains in the Southwest corner the way it used to be; Maureen and i partially did that about a million years ago when dating someone was a proper description of a relationship (another story).

It is a beautiful drive and an engineering marvel. Bridges approaching a half-mile long hundreds of feet above the canyons below. Grandeurs amazing in their rocky vastness. Sometimes on this high, i feel like i could touch the heavens, even at seventy miles an hour.

Outposts, mostly on Indian Reservations (Sorry if someone takes offense at the terms), of homes designed for working the land, such as it is with rocks and almost no level place for planting, yards filled with equipment some operating, some obviously long silent, but who is going to get those mechanical, metal behemoths off the mountain. A lonely life? Hmm, i don’t know. Sometimes, sometimes i think they live a simple life and don’t concern themselves with everybody in the world trying to fix everybody and everything their way and opposing all who wish to change them or their views. No, they rise early, gather the eggs, milk the cows, slop the pigs, and don’t think too much about indoor pets. Everyone works. And then the breakfast, homemade, hearty. And then to work again, tending fields, at least what there is, clearing land, checking the herds, perhaps even rounding them up from the rocky crevasses; home for noontime dinner, another big one, probably tortillas rather than buttermilk biscuits; perhaps a nap; then back at it until the cows come home to milk and feed again, supper; rocking on the porch for a while, perhaps reading a bit; but likely the Farmer’s Gazette and not a novel; hitting the rack early after a shower.

There is some beauty in that. i know i would have problems with the remoteness, the aloneness, but i dream.

i contemplate as i coast down the switchbacks to the desert valley. Looking southward, mountains and hills remain cloudy from the mountain mists, gray and three dimensional in their ethereal aloofness from any country’s claim of their property; Zane Gray stuff but Mexican, not the vastness which also resides in Utah, the location of Riders of the Purple Sage, the first western novel to capture my heart, but beauty untouched, unlike at the peak of the mountains down to the valley floor of sand and dirt and scrub brush and not much more now disrupted by the giant fans, windmills of the now for electric power, not water from wells and aquifers as before and when whirling, slaying the unsuspecting fowl; followed by the miles, square miles of solar panels and the attendant machine-looking plants to harness the power of the wind things and the panels; and then fields of plants; not a farmer’s garden next to his small home, but fields, seas of plants, neatly planted in rows, and tended, plucked by many men bussed in with port-a-potties scattered across the landscape and irrigation that would blow the minds of my Tennessee farming brethren, and the men, perhaps with family, in row houses with no shade from the desert heat and dirt yards and worse, the barracks-like quarters for these laborers who are paid disproportionately low for their effort, which none of high and mighty folks who wish to include them in their eviction to even greater poverty because the truck farmer owners and the corporate men know “the Jolly Green Giant pees in the valley;” but we don’t think about that; sad; we condemn like we once did the Irish and Italians and Germans and anyone who came after us because we were high and mighty and disdainful of folks who are now part of our heritage; but we just can’t seem to learn from history.

And then there is El Centro, the town in the middle of the desert, housing a large number of the folks from Mexico who work so hard and the Mexican restaurants abound; and once when the winds forbade my western passage over the mountains, i stayed in the cheap, roadside hotel, and walked a block to a Thai restaurant to find the owners were the Mexican family gathered inside, and sat by myself and found the Thai cuisine really prepared well, tasty, and suspecting some jalapeño might have spiced it up a bit, and on through more fields until reaching the dunes. Miles and miles of rolling mounds of sand as far as the eye could see except where hundreds, literally hundreds of RV’s of every shape and size sat in the forlornness while the owners and their kin and friends rode dune buggies recklessly across those dunes up and down sometimes in caravans, leaping into the air and landing with humongous shock absorbers softening the landing while the drivers and riders swallowed the sand and have it encase them so they could use the precious desert water to shower off the sand and grit and grime so they could grill burgers and sit around in the evening and brag of their exploits while drinking light beer or perhaps tequila. And i am amazed and wonder why every time i see them while passing.

And then Yuma, continuation of the desert but the flora and fauna change but to be frank, there ain’t much change to Gila Bend, once home of the Astro Hotel, long gone to shabbier environs but replaced by the Best Western Space Age Lodge, a little bit cleaner version than the locally owned breed where we once stayed with the cold shower running about 95 degrees at ten in the evening (but that’s another story); but i cut through on Arizona 85 to Interstate 10, the promenade to and from LA and trucks and trucks and trucks to the outskirts of Phoenix and Peoria and Glendale and Surprise and Scottsdale and Goodyear and Mesa and i see…concrete.

It is a complex some fifty miles east west and the same north south. Concrete. A big city just like the other big cities with the same corporate shopping, the same strip malls, the same artsy fartsy shops, or at least in keeping with the idea of the other big cities and roads and cars, lots and lots of cars and continuing expansion of houses, people, road construction.

But then i am there: Scottsdale; Air BnB house; and my friends from almost sixty years ago and still laughing and still enjoying each other’s company and baseball. Yeah, baseball. Sitting in a ballpark with a hot dog, later peanuts, and a beer, watching the game, kibitzing, cheering good plays of either side. College kids playing ball, quite a bit different than the factory mindset of college football and basketball. Eleven and half scholarships maximum, even though some Mississippi State fans believe Vandy gets 35. Huh? And we lose two out of three. But you know what, that is not what is most important. It’s a game. We are friends.

We enjoy each other’s company and the game:

And the world was right. We also enjoy good eats and we did, and we enjoy exploring and we did. Our favorite this trip was the Western Spirit: Scottsdale’s Museum of the West with great and expansive art, surprisingly including some wonderful photography by Barry Goldwater, and relics of the old west, too many to mention and then there was Alan and i  becoming a part of western art: 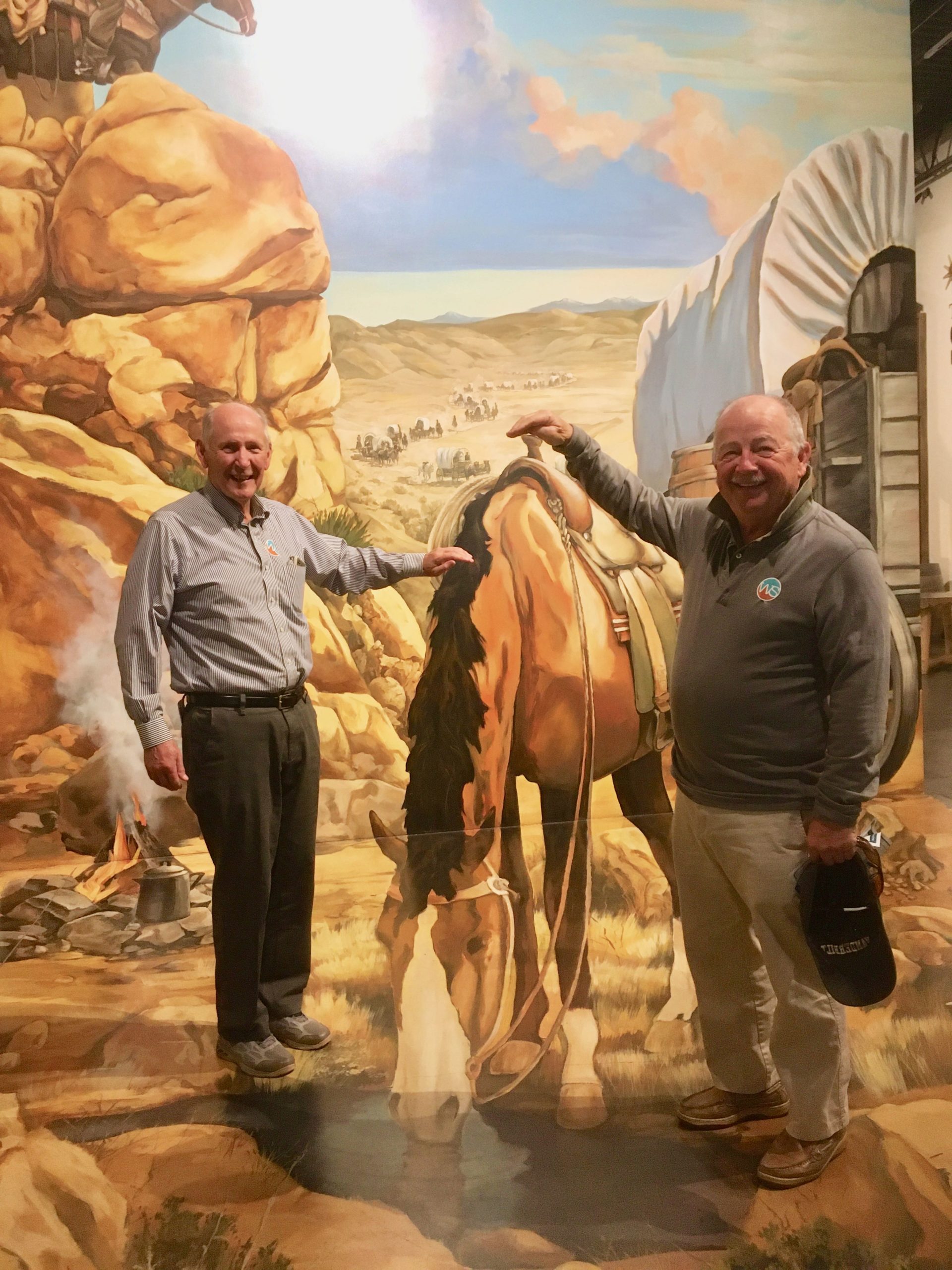 And then it was over. The ride back was just fine except for all of those RV’s with dune buggy tows over the mountain.

And i learned my recovery time for long drives i love has extended into days.

But i’ll do it again at the next opportunity.

Go Vandy. i think they will do just fine this season. i know i will.

2 thoughts on “Valentine’s Not”