This was begun last Thursday. Then it got crazy as it seems to do more than it should.

Since i started this, i made a quick decision to go to the desert to spend much too not enough time with one of my best all-time friends, Frank Kerrigan, who once kept my sanity and is the godfather of daughter Sarah.

It was a three-hour drive over the mountains, the back way because even though those GPS wonders say it’s faster, i avoid freeways when possible, and therefore wound around the switchbacks up to about 5,000 feet and down again, stopping at the junction of CA 371 and CA 74 for a Gaucho Special Omelette composed of scrambled eggs with Chorizo and jalapeños, topped with tomatillo sauce, sour cream, and homemade salsa along with a Green Flash IPA breakfast beer at the Paradise Valley Cafe, which Pistol Annie, so named because she toted two six guns on her hips for years during her ownership, from 1939 until  sometime in the 50’s or 60’s still carrying those six guns on her hips.

Arriving in the 100 degree dry heat of the desert,  Frank and i played a round at the Plantation, an incredible golf course only for totally politically incorrect men, where i gave out after 16 holes and picked up after the 432nd bunker shot and sat on the veranda waiting for Frank, who was waiting for me on the other side of the clubhouse, and i looked down the eighteenth fairway and beyond the first tee and thought of it being around 75 degrees with a breeze in the shade on the pristine world of golf, and just maybe, just maybe, like the guy in the bar on my first time there about fifteen years ago, who sat in one of the five leather recliners facing a bank of six televisions with different sports events and he, with a beer in each hand turning to me and declaring, “I ain’t going  home.” And Frank and i went to the Hideaway course to shower and have dinner on another veranda with a wedding and reception going on and then we returned to talk until the we hours solving most of the problems of the world and one or two of our own before the rack, awaking, saying goodbyes before Frank headed back to his beloved Lake Michigan and i reversed the ride up and down the mountain to get home for a late afternoon supper at our place for special events, this time for Mother’s Day with Maureen and Sarah, which was damn near perfect. And i got home, one very tired old puppy, and all was well.

Today was recovery day, getting my act together until tonight i remembered i started this when i sat outside again and, hopefully, will finish this sometime today.

And so it began:

This afternoon was ’bout perfect for this old man to ruminate.

It was a day of doing things to fix up the house. i finished with a run to pick up the pork butt for Maureen’s carnitas tacos. When i got back, i decided to take it easy. After all, the Padres were off tonight, and i will go to bed a bit earlier to be ready for our early FMG: Friday Morning Golf.

After all, i do live in the Southwest corner, which i again related to my close friends, Alan and Maren Hicks, this afternoon that most places in the world have more 10’s (on a scale of 0-10) than San Diego, because it’s relative. But no place on earth has more 7’s, 8’s, and 9’s than the Southwest corner and except for two wildfires (one of which scared us but never really came close) back in 2004 and 2007 i’ve never seen anything 6 or below.

And it’s May. Right? The week after the Kentucky Derby. i mixed a gin and tonic and went out in the backyard to relax and enjoy. 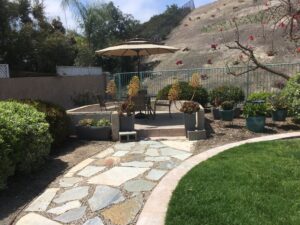 i chose the upraised area we have dubbed the “sitting area” rather than under our new trellis on the patio, which i had used several days earlier to work, not relax. We wished to retain the sunlight in our living room and dining room and were reluctant to cover that patio, but with the new sliding doors and a sunshade rather than a solid roof, it has become one of favorite places: 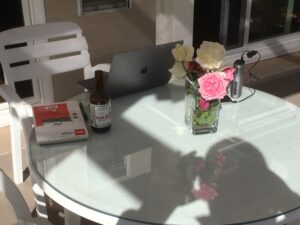 And last Thursday, i did, relax, enjoy that is. i discarded all of the negatives to which i am exposed on a continuing basis, wondering why for just a moment and remembering Mose Allison explaining “everybody’s crying mercy when they don’t know the meaning of the word” and “everybody’s crying justice just as long as they get theirs first” and “everybody’s crying peace on earth just as soon as we win this war,” and i know Miles got it right and i just need to let it go. And i do and know i am a lucky man.

i also wondered how i ended up with a woman with immaculate taste and a designer of a great landscape. i looked around to see what she, our rather spectacular Brit gardener, Paul Shipley, my father, old time friend Peter Schurek (with whom i’ve lost touch), all under Maureen’s guidance, and just a bit of a few things i’ve done. 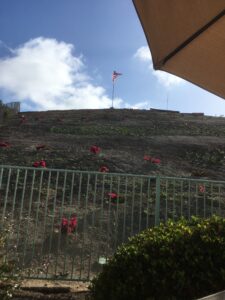 From my vantage i looked up at my flag. It has become a neighborhood delight. Unlike all of the brazen disrespect for the flag have adopted to scream for their causes, this one is always in keeping with the U.S. Flag regulations. Respect for the constitution for which it stands; you know:  others Like there is this hill, this slope, that was lovely with the development men’s short term fix when we bought thirty-one years ago but quickly overtaken by the acacia they had added, and the acacia, unknown to many and certainly to us until we learned the acacia bark is a treat for tree rats and the tree rats are a treat for the Southwestern rattler and we soon had a sizable population of all three, two of which would often leave this paradise of the food chain to visit our yard proper and one, the tree rats finding 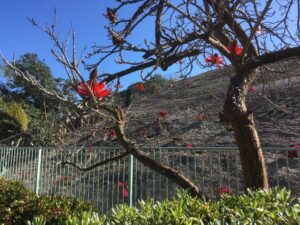 the way into our attic, and all was not fun until we cleared the slope from all things, especially the acacia and the other two have become sparse and all was good until the rains came and turned the top layers of dirt to mud, which in turned slid down the slope to park up against the fence, which is when we started the project displayed here and the areas with the bougainvillea and the multi-colored blooms of the ice plant are already starting to spread…and of course, we will find other problems with this fix-it plan i’m sure.

i will never be able to adequately explain to my friends back home why we remain in the Southwest corner.  As i walked around our backyard, i decided to provide some photos of a a part of our reason why,

There are the two side yards: 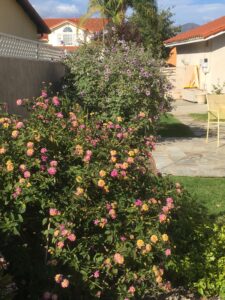 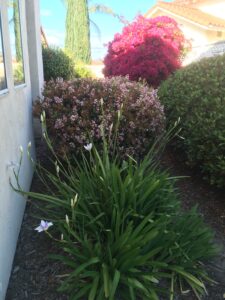 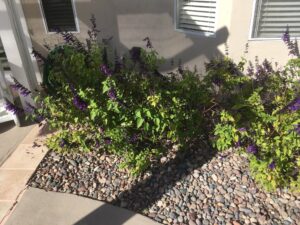 And then there is the all-year blooming salvia that allows the hummingbirds to greet us at breakfast every morning. Oh, we are not rich. We would like to travel more and have some trips planned, and there are some things we would do for our home if we had a bit more money. But in the scheme of things, we have enough, and i can be just fine, right here, for as long as i am going to be around. I’m not grousing. No, sir.

i just keep trying to make my friends back home why i choose to keep my home in the Southwest corner and not return to where i was born: 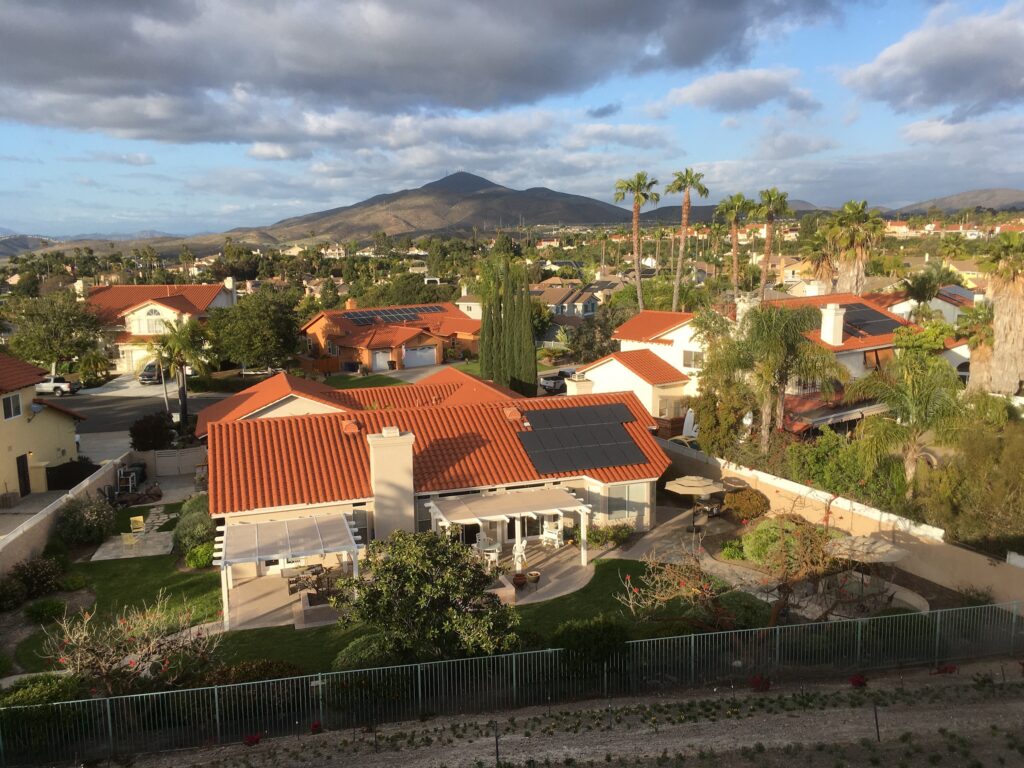 1 thought on “Twilight Before FMG”