i thank my brother and sister in helping me remember his fishing buddies.

Sometimes i wonder why i thought it was really a great thing.

I have always wondered why my father did it. He did it from the time i could remember, and i learned he had done it pretty much all of his adult life.

His last shot at it was after he turned 93. It wasn’t that he couldn’t do it anymore. There was no longer anyone who would go with him, and he didn’t want to be away from my mother, who was in poor health in her later years.

Even now, i would like to do the kind of fishing we did mostly, perhaps not on his scale, and i would have to find time to do it. It’s also different here in the Southwest corner compared to back home.

He did some deep sea fishing with his brother-in-law, Uncle Bill Prichard (whose wife often said i looked just like him) out of Florida, but not a whole lot. i don’t think he did a lot, if any, fly fishing.  — Except for some great four or five summers with Henry Harding, i haven’t flyfished. But driving out to Barton’s Creek on Franklin Road, parking our car by the bridge, wading in our swimsuits and old sneakers with small rope stringers tied to the back of our swimsuits, wading through the creek shallows both north and south, casting and sometimes, sometimes catching a bream or sunfish remains one of my greater joys and the source of great stories Henry and i share still — But Jimmy Jewell  fished off of docks and banks and an untold number of boats he owned including the wooden speed boat he and Uncle George Martin built, which then sunk on its test run somewhere west of Ramsey’s boat dock on the Cumberland River back in the late forties. There was one time (i’m not sure how many times he did it) in February of sixty-eight after i was commissioned and on my way to Key West for Anti-Submarine Officer School where i fished with other ensigns in various training programs each Sunday when we would leave early, board Morale Welfare, and Recreations, converted harbor patrol craft and fish for grouper and barracuda fairly successfully while eating geedunk sandwiches made with fresh Cuban bread we picked up at a bakery before leaving and drinking copious amount of beer out of one of the two huge ice boxes, the other of which was reserved for the catch, and have a barbecue that night with more beer. But back to that February, Daddy, Uncle Snooks, and i drove over to Pickwick Dam one afternoon in about three hours, stayed in an unheated cabin overnight, to get up, put the boat in the water, and fished for sauger until the snow was getting too thick to see, and i still remember it as one of the coldest times in my life (along with standing in and out of Pusan, Korea harbor in January and February, 1979, and playing golf at San Francisco’s Harding Park in July, 1975).

Then there was that August when he and i went catfish fishing below the dam at Center Hill. It was about 95 degrees and 95 percent humidity, de rigueur for Tennessee Augusts back then. We bought about six pints of shad guts for bait. Daddy had his usual supply of sardines, Vienna sausages, and saltine crackers. It was hot. He typically sweated but not as much as me. He caught about half-dozen good sized catfish, i caught two, one of which finned me as i was taking out the hook and dropped the catfish back in the water. And it was hot and i began to wipe the sweat crawling down my face with my hands and then bait the hook with those ultra-foul smelling shad guts and then eat a sardine or a Vienna sausage with a saltine and smelled like something from worse than the stockyards for three or more days and it was fun and don’t ask me why and then something hit my line and i set the hook and pulled and then whatever it was, a big catfish we think, just began swimming away taking my line with it slowly, methodically, moving steadfastly unwinding my reel ignoring my efforts to stop it and the line was about half gone from the reel when finally my father cut the line. Must have been one hell of a big catfish.

He fished for crappie, even small mouth and large mouth bass, and pretty much anything that would bite on a TVA lake.

Of course, i was never as good as he was. But i tried.

I understand one of my favorite kinds of fishing is no longer available back home. Someone told me the striped bass they stocked in the TVA lakes are all gone. Sad.

I remember fishing for them with my father.

Sometimes we would trawl for them with white shad lures trailing behind the fourteen-foot Aluma-Craft with the Johnson twenty-five horsepower outboard motor running as low as possible. We often took the boat out to the river from about a mile up Barton’s Creek into the channel where Old Hickory Lake has just about transmorphed into the Cumberland River again. Before fishing sonars, we used as we blindly searched for a school of the striped bass although he was a magician at finding them so perhaps “blindly” is not an accurate description. If we found them, we would catch five or six on a run, turn 180 and trawl back over the ground to catch more. But we never really caught a great load. i think the largest number was around ten or so. Of course, he caught most of them.

What i remember most though was his night fishing for those striped bass, mind you.

i think his children got to go along with him occasionally. i know i did frequently. But he had scores of fishing buddies over the years: Lum Edwards, Glenn Bishop, Herbert Tomlinson, Harry Martin, Sergeant Major Richards from Castle Heights, my cousin Maxwell Martin, my uncle Snooks Hall, and occasionally Henry would go with us. The stories are of legend and many.

He, with whomever was going with him, would load up after supper and head to Center Hill Lake, most likely the Sligo Boat Dock. He would put about a half-dozen to a dozen minnows in the bait bucket and go to one of his favorite holes: he knew all of the lakes like he knew the back of his hand. Once he determined which deep hole was best, he anchored with an old window weight or two tied to a rope for the anchor. A couple of Coleman kerosine lanterns with a shield toward the boat would be hung over the side. Mind you, he didn’t go with a full moon and preferred cloudy nights. The darker it was, the more effective was the light from the lanterns to draw the shad minnows. He would use a seine to catch more shad for the bait bucket. He, himself, would put two or three rods and reels leaning over the side and lowering the weighted lines to what he estimated was the bottom of the shad pool attracted to the lantern light. That was where the striped bass would hit. And they ran in big schools. He quite frequently came home in the early morning with over a hundred striped bass, usually in the three-pound range, sometimes bigger.

And what happened next?

Well, he didn’t like to eat fish. So he would clean and dress the fish, roll them up in newspaper and give them to family, neighbors, and friends. Then he would eat breakfast and go to work. Often he would repeat this two or three times a week during the warmer months, sometimes even back to back. 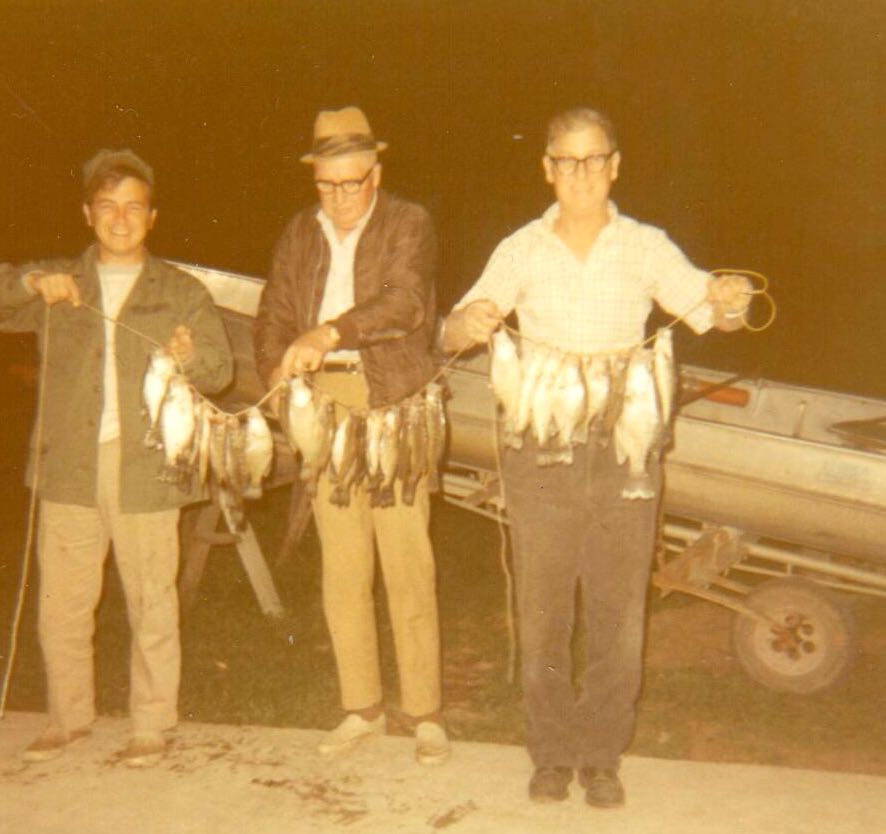