No, i’m not taking the Fifth.

However, it would probably be a good thing for a while. Maybe some of you would actually like that.

But nope, i’ve just slowed down a bit. You see, this thing i’m calling hunkering down ain’t turning out ‘zactly like i was a thinkin’. But mo’ ’bout that later.

And it ain’t for a fifth of whiskey or gin. Oh, i’m pretty well stocked up, but considering the circumstances, i’ve been holding off on that pretty well. Ole George Dickel ain’t too pleased with that, but Maureen, she’s okay with it.

No, this is more about weeks, like the fifth week we just spent pretty much in this house. The Southwest corner Jewell’s have been sequestered for 35 days. Well, not really sequestered or quarantined but we have hunkered down.

i started this post off about two days ago, and i was on my high horse. Finding fault with…oh, lots of things. i ran the numbers on the world’s percentage of covid-19 cases and deaths against the population  (7,580,000,000  or 7.58 Billion souls/those infected 2,240,191/those dead 150,000) but my calculator — yes, i still use one because this technologically challenged yahoo still wrestles with MS Excel and other spreadsheets, once again, proving it was a damn good thing i didn’t end up in engineering — couldn’t get to the smaller numbers from all of the larger numbers (my math lesson for the day), but i realized all of my gibberish sounded a whole lot like all the other gibberish that’s out there.

So i ain’t gonna do that other than note we don’t have a hell of a lot of staying power. This, of course is not true of sailors from my era. An aside: Here’s a take from Tom LItwin who posted the below on the Facebook group US Navy Gearing Class Destroyers, and it is so true (Thanks, Tom): 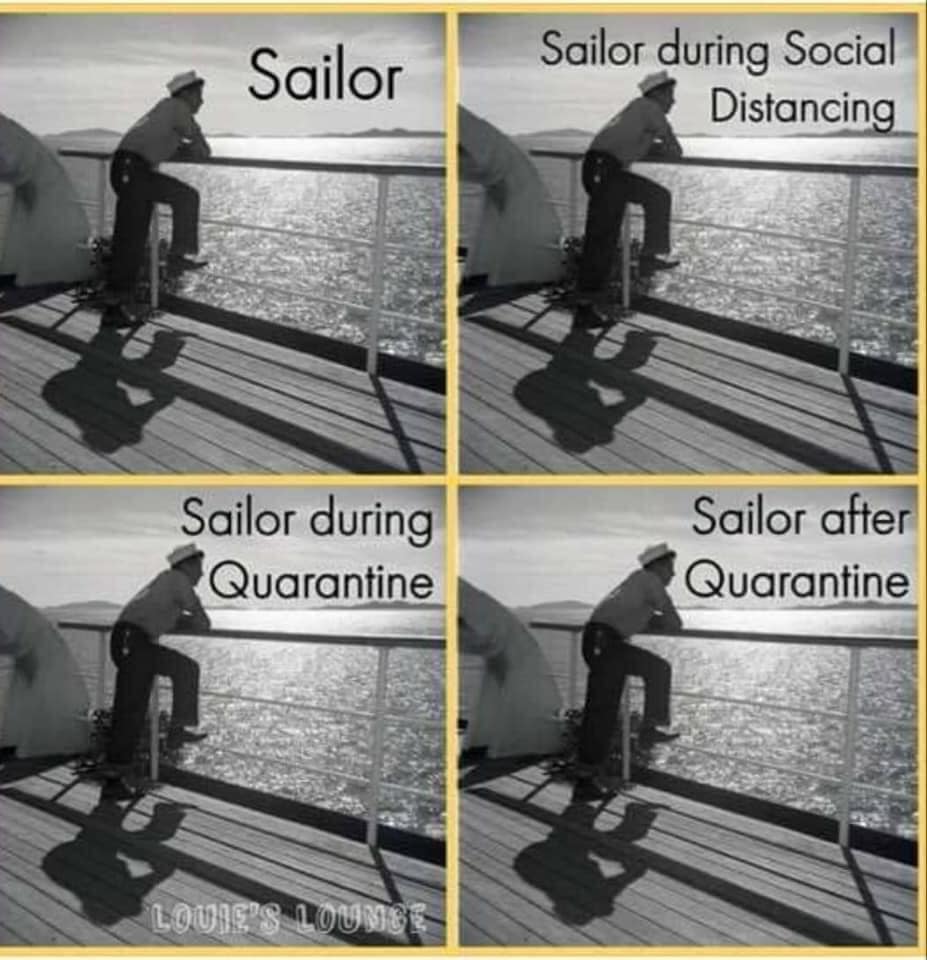 But the rest of us. Nope. Lots of gibberish out there. Apparently, there are a lot of people who know a hell of a lot about what is best for all of us and don’t even consider they might be wrong. And we have returned to the new normal. We’ve got people protesting about being sheltered and others demanding we be more sheltered and, of course, the left is now blaming the right and the right is blaming the left.

…and you know what?

You folks can have at it. i ain’t in it. i’m gonna do what i’m gonna do and it is what i think will be a good example and not endanger anyone, especially my family.

So tonight with the recommendation and assistance of Amy Beth Hale, i watched the Station Inn documentary on its history and bluegrass music, and i was taken away from the craziness.

And you know, i’m a lot like that sailor above. This really ain’t bad.

1 thought on “The Fifth”