It is Sunday afternoon. The “Super Bowl” has just begun its (for Anne Donnell) telecast.

i am not watching, not for all of the political positions that have been taken to not watch, nor for my own curmudgeondry (yes, Anne, i made it up), but because i don’t think there is anything “super” about it, there is no “bowl” in sight, and i am not enamored with any half-time show that doesn’t have marching bands, especially if half-time runs longer than normal games.

So i had to have something to do…since i’m not watching the non super non bowl (sounds like an Asian dish). You see, i completed my penultimate review of my manuscript for Steel Decks and Glass Ceilings: An Executive Officer’s Memoir last night, and moved the photos to a thumb drive to forward to my editor, the wonderful Jennifer McCord, tomorrow. All the rest of my work will be on getting it published and sold to the amount i don’t lose money.

i have about 7,896, 431 tasks on my to-do list. Yet today, i feel like i’m in a vacuum with nothing to do. When i finally took on one of those tasks, i went maximum lethargic. Just not into it.

So, i went into my office to find a book on Ulysses S. Grant for Maureen. As i reached for it, i noticed on the shelf directly above it proof. Sunshine.

The cover is gone. i had scotched taped the entire cover, but it is a bit old and the cover disappeared in those 64 years. Still, it’s proof: Sassy and i were twins. 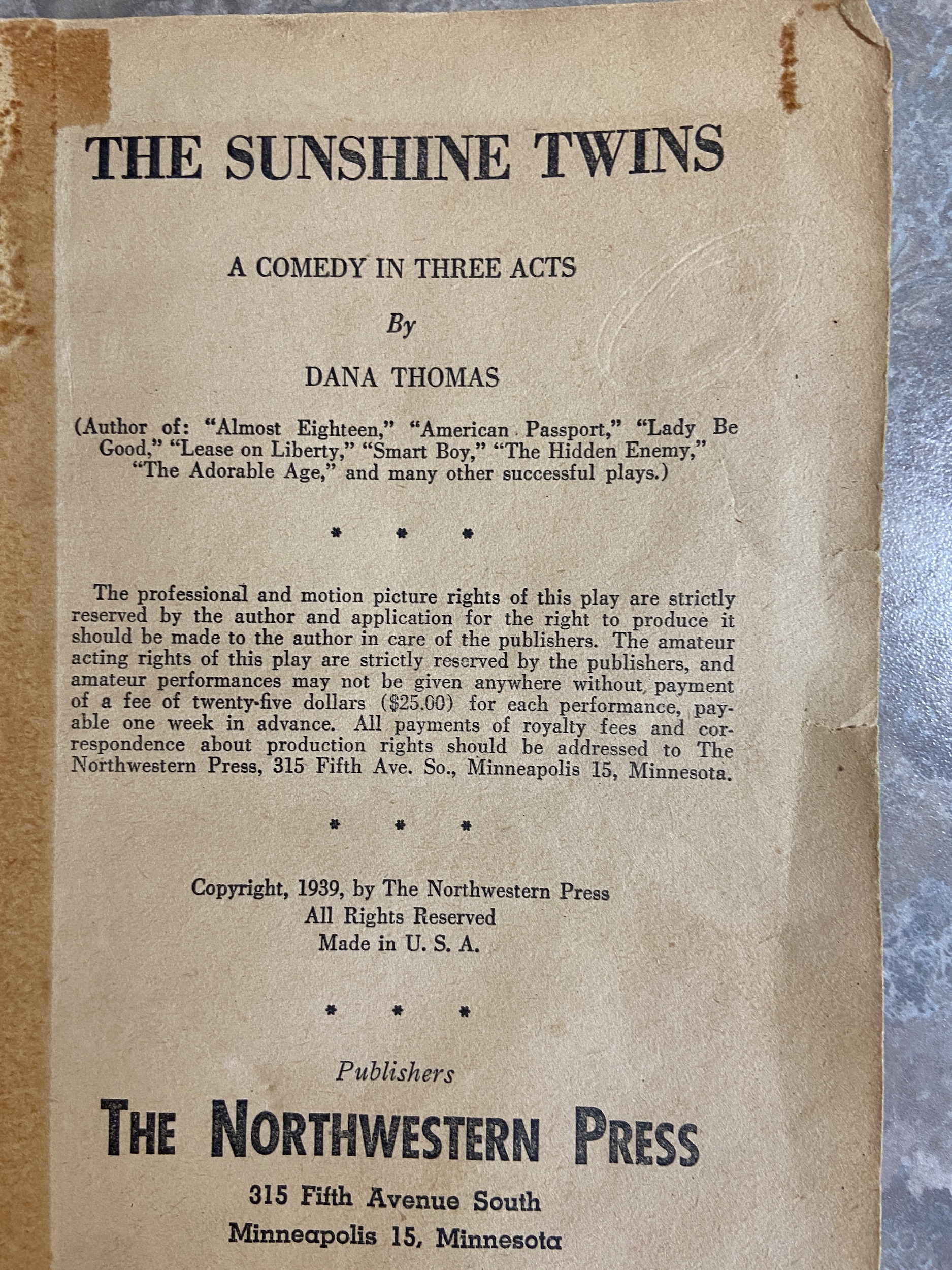 And on the next page, Mrs.Burton, i think, wrote the names of each actor by their character on the cast list: 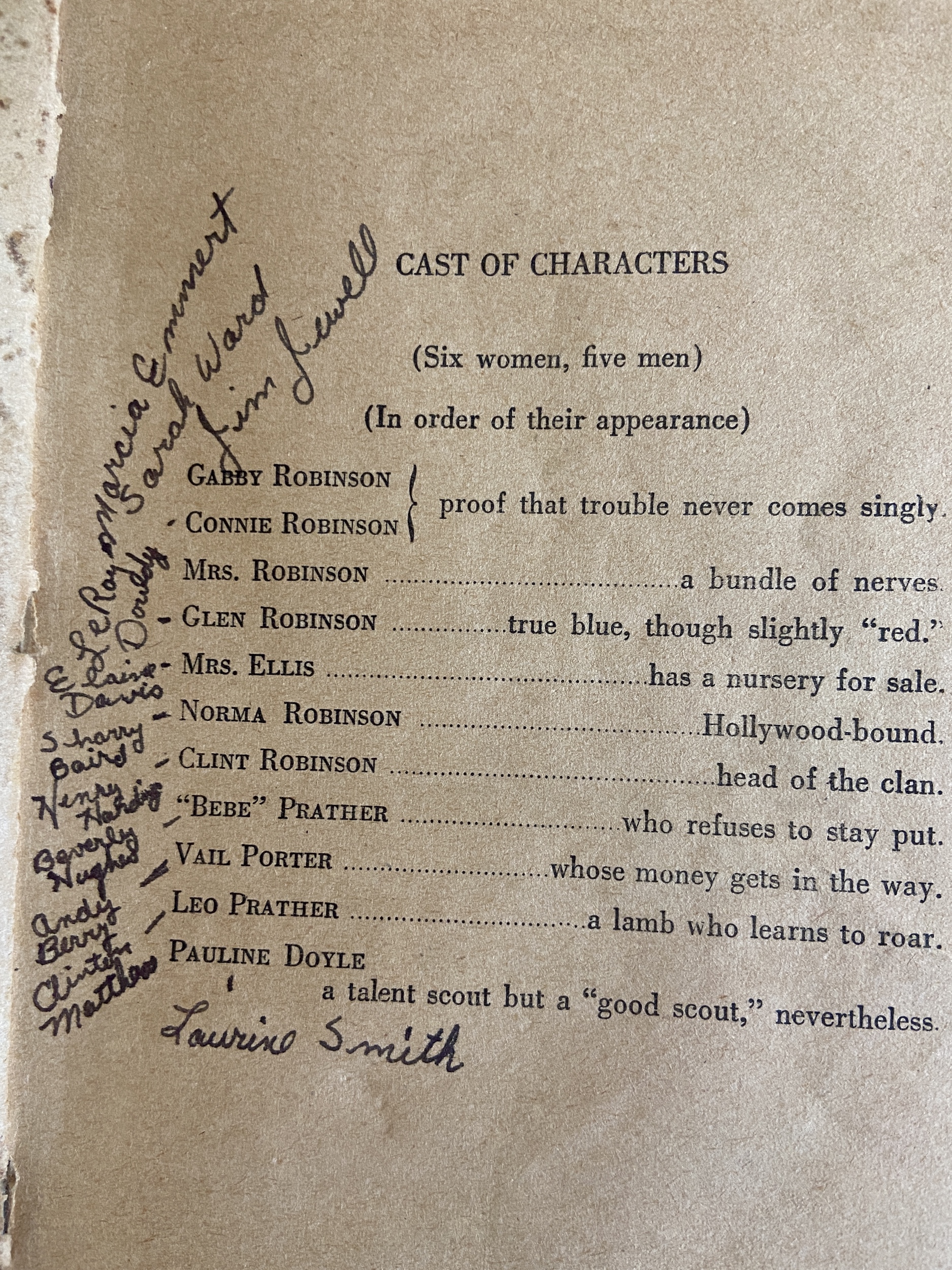 i find the descriptions of the characters amusing:

i understand how i was selected for Gabby but i’m also proof trouble sometimes comes singly; i don’t think Sassy has ever been trouble for anyone.

i cannot imagine Marcia with “a bundle of nerves.”

If there was ever anyone who is true blue, it would be Lee Dowdy; “Red” is certainly off base.

i wonder where Elaine is. After all, she wore my ring around her neck.

She could have been had she wanted to.

He was always my father in plays, dos amigos who called each other to ensure our outfits matched.

But she did and Buddy Phillips was glad she did.

Andy Berry: Vail Porter…whose money gets in the way

i don’t think anything ever got in Andy’s way enough to stop him, and he broke the curve in Vanderbilt Chemistry 101, which gave me a “D” instead of a “C.”

Clint roared on the basketball court like a lion, and it was so much fun to pass him the ball on a fast break and watch him go to work.

Always pretty. And yes, Laurene was a good scout.

Yeh, i think i prefer my memories of The Sunshine Twins to a not so super not so bowl, even as Maureen watches in the other room, primarily for the commercials and half-time show. Now if the Texas A&M Military Marching Band or any band with Townley Johnson as the drum major and i would be all over it.

But where is Alan “the Horse” Ameche when i need him?