Tuesday, a typical Southwest corner winter day snuck between the rolling storms from the Pacific.

It has been a while. Back years ago, i expected with justification about thirty damp, rainy days clustered together sometime between November and March. For a number of years, with those belonging to el niña being the exceptions, it has been dry winters.

Not this year. The rainy season is working hard on two months. The weather guessers say it will end sometime next week. i’m not betting on it. But there are good signs. Like Tuesday.

Now before continuing, i wish to pronounce i’m not complaining. Compared to the rest of the country, the Southwest corner comes out okay. i watch the news of the extreme weather in my old haunts north and south, east of the Mississippi and feel sad for those who have been caught in the catastrophes. The past two months in the Southwest corner have produced a bit of discomfort but nothing compared to back east.

Tuesday, we got a reminder of our weather. When i write “we,” i’m talking about my golfing buddies, Rod Stark, Marty Linville, and Pete Toennies. The four of us played Sea ‘n Air, the Navy’s course on the Naval Air Station, North Island. It was in the 60’s with a breeze and clear, San Diego all around us, the Pacific in clarity to our west so clear the Los Coronados Islands stand out on the horizon. There are no photos of that day. i posted enough photos of San Diego in its glory. That was a respite. 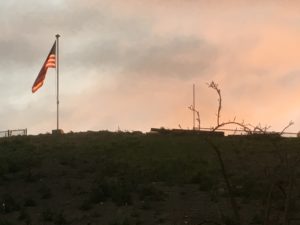 And even though the dark clouds were rolling across the heavens Monday night, i received a harbinger of what was to come. i was grilling pollo asada for a Maureen dinner delight. The sunset on our hill above was going to be spectacular, perhaps even a green flash possible, but i had chores to tend to, like grilling. 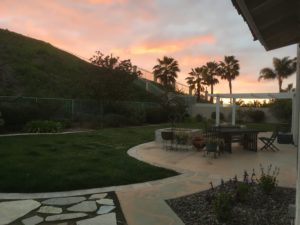 Even the backyard in its seemingly endless state of repair, glowed in the last moments of sunset.

Grilling at this time of day is one of the more relaxing moments in my life. The world is mine and with my iPod and bluetooth speakers, i’m listening to my favorites, enjoying the evening setting in, and perhaps a glass of wine. 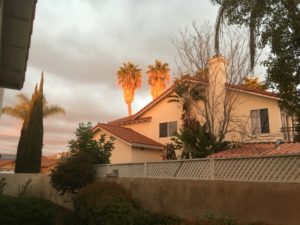 The clouds send their ominous warning, but before the setting of the sun, there is another moment of reflection: looking east, the glow off the neighbors’ Mexican fan palms give hope.

Darkness from the east and clouds from the west capture the night from the sun. Twilight is gone. And in the last throes of my grilling, i am greeted by a familiar whir to me. In the clouds directly overhead, i her ear the thump, thump, thump of rotor blades. 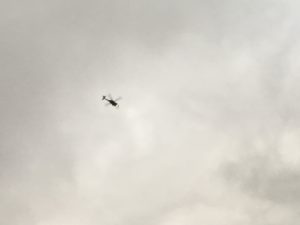 The sound was not up close like it had so many times on flight decks, or over them, on my ships of the past. i look up and sea the Navy helicopter a whirring east, probably some pilot trying to make sure he has completed the required flight hours for the month. But impressive never the less, symbolic even, the clouds setting in, but the helo there as if protecting us from something worse, much worse.

The dinner was delicious, and we had a fire in the hearth. The world was good. And i played golf in damn near perfect weather. 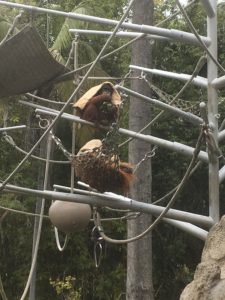 With rain predicted on Wednesday, we said the heck with it and went to the zoo, my getaway place like Bugs Bunny’s briar patch. Even the orangutans had figured out how to ward off the rain. But it wasn’t bad, almost pleasant. If you are a zoo person as i am, Sarah more so, Maureen appreciative but not nutty like Sarah and i, you like going in weather like this. The nice weather thousands in the Southwest corner don’t go. The crowds are few and this time in the cloudy weather, many more of the animals were out for us to see.

And the zoo was the zoo. Always different. Always see 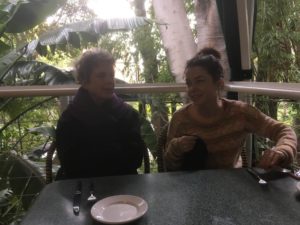 something new. Always hit the spots we love. Like Albert’s, the restaurant in the middle of the zoo that makes you feel like you are on a safari. We even sat outside our favorite. i was blessed with two beautiful women as my companions.

It was a short visit. The kind i like. That all day thing can wear you out. Twenty years and more ago, one of my favorite things was to pick Sarah up at elementary school and get there about four. For an hour, we would go to see a half dozen or more exhibits we wanted to see that day (Sarah would always want to go the bat exhibit first). The newbie folks or tourists had been there all day: the kids were grumpy and tired, many asleep on a shoulder or in a stroller. The adults were worn out. We would pass them with Sarah on my shoulders and we were singing and laughing or excited about something we saw. All those other folks would look at us like we had lost our minds. Fun.

But this trip was even more special. We ran into, of all things, several groups of young women with black athletic gear. It was the Vanderbilt women’s lacrosse team, currently undefeated and playing San Diego State tomorrow night. We explained our connection. And, and Sarah took a picture. 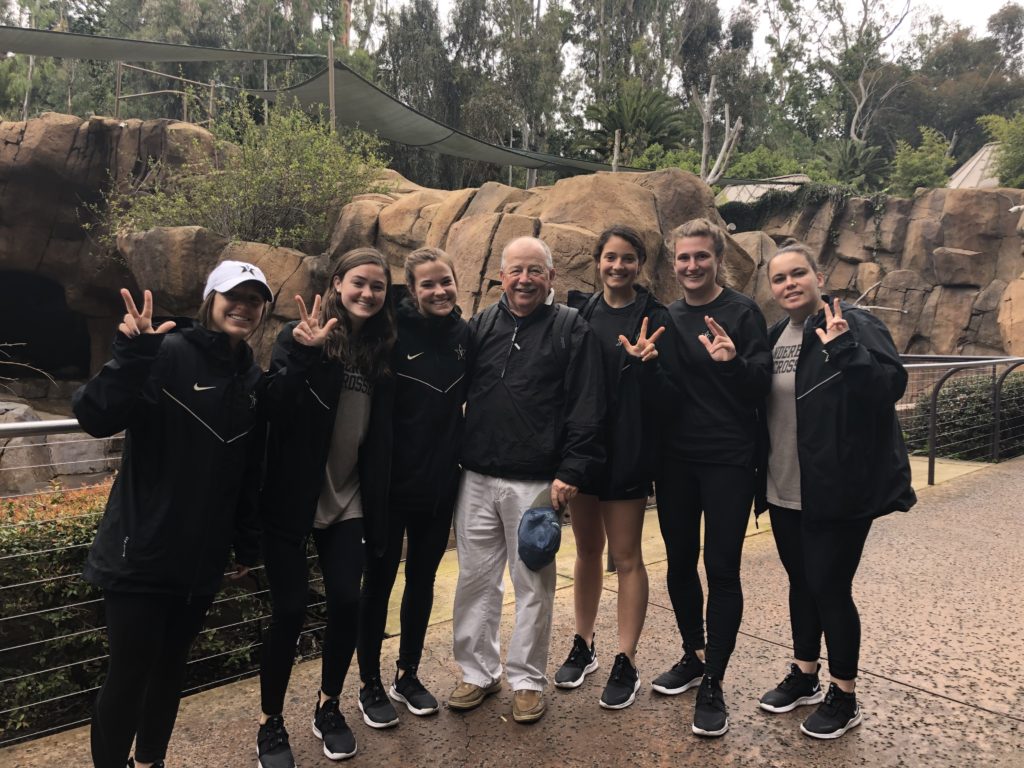 And guess where i’m going to be tomorrow night?