It is still not finished.

There are the lights to hang. The hardscape needs a new finish. The teak table needs to have all of the aircraft soot cleaned off and should be lightly sanded before adding a sealant. i need to figure out a better place to hang the hammock. Extra shades need to be constructed to hang on the south and west corners to keep the sun out of the eyes for folks sitting there in the late afternoon.

i figure these finishing touches, based on the primary project, will take about six months. i’m planning to get it done in two weeks. Optimism versus experience.

But the major renovation is done. It was not easy. It ain’t Tennessee August hot. It ain’t Texas four or five months out of the year hot, but seventy-five to eighty for a seventy-five year old man is hot. And it was really sort of silly. Really.

The original idea was mine. i wanted a trellis not connected to the house. i had a very stupid run-in with the city’s “construction development” department at our previous home. We envisioned the Carolina jasmine vine growing over the top. My father, looking for a project during my parent’s annual pilgrimage to the Southwest corner to escape Tennessee winters, took it on.

What he created was unique, simple but really a piece of art. i did not want to ruin the effect by adding slats to encourage vine growth. Consequently, the vines didn’t grow. We were okay with that. It looked nice the way it was.

That was about twenty-six years ago. Wood outside in the Southwest corner can take some hits over twenty-six years, like termites and wood rot. It was time to fix it or tear it down for something else.

i am a sentimental old fool. It was mine and my father’s project, although he did the largest part of the work. So i replaced two cross beams, sanded and gouged out significant chunks of other beams, became a believer in “Plastic Wood,” and figured we could get at least fifteen, maybe even twenty more years out of it, and by that time, i wouldn’t care.

And so it began. i shall not go into the twists and the turns, but a week-long project adhered to my modus operandi: unforeseen problems, forgetfulness, wrong tools, interruptions, and on and on and on. And then, it dawned on me it would be a much nicer area to sit with sun shade screens on the top. Voila! An addition to the original project. It would have been funny if it had not been me. But i stuck to my guns. i did not take short cuts. i did not go buy fancy or even un-fancy tools i would use only once or twice. i did, except for the electric sander, our gardener, Paul Shipley, loaned me and used only sparingly, not use power tools. My father would have chided me for that: he was a practical man.

As i was finishing nailing the last sections of battens onto the shade with sweat darkening my tee shirt, i stopped.

It was almost as if he were talking to me. Jimmy Jewell seemed to be there. He did not speak. But i could feel him. From the top rung of my ladder, i looked up at the cloudless sky. Out loud, i said, “Thank you, Daddy (i don’t think i ever called him “Dad”).

i stared upwards. i could feel her too. i added, “Thank you, Mother (and i never called her “Mom”).”

i didn’t cry, but it was close.

And i thought of the world as it is today and how the things they taught me aren’t the ways of today’s world.

And i am glad i am stuck in their world (and mine) where a good job, hard work, taking care of things without malice on your own is really the reward.

So again, Thank you, Mother and Daddy. 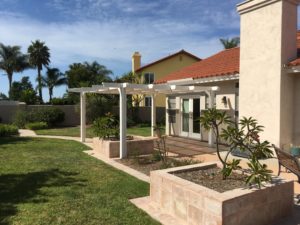 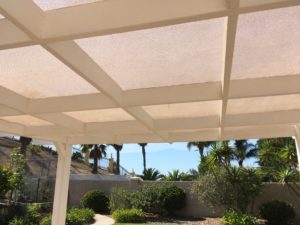