Although the regular monthly golf tournament with telephone folks has gone away, there is still one golf tradition in the Southwest corner not going away anytime soon.

Rod Stark, Marty Linville, and i began playing golf with each other in 1985 while the three of us were in our twilight military tours, Rod and i in the Navy and Marty in the Army, at the Naval Amphibious School, Coronado — of course, it has, as with all things military, been renamed because some hot shot trying to make admiral or general or get higher if he or she was already a flag officer came up with an idea for the selection board to see they were doing something: truly change for change sake (okay, enough of my whining). Regardless, the three of us often joined by Ray Boggs, my father-in-law, would play on Saturdays or Sunday.

It was tough to get weekend tee times on the four military courses, Admiral Baker North and South, Sea ‘n Air on the North Island Naval Air Station, and Miramar, then another Naval Air Station, now a Marine Corps Air Station. When we went to get tee times, many had already been taken by retired military folks, or as we called them “old farts.” Of course, they could play during the week, but they chose to take tee times on the weekend, the only time active duty could play.

So the three of us made a pact once we retired we would not play on military courses on the weekends in order for active duty to be able to play. Marty retired in ’87, i followed at the end of ’89, and Rod left active duty about two years later. Our weekend golf stopped. Rod became a club pro at the North Course in Sun City, Marty went to work for a military contractor, and i was “Mister Mom.”

Marty and i worked up a round at North Island during the week in the spring of 1991. We discussed our options. Marty had just gone on a nine-hour workday, taking off every other Friday. We decided we would play at one of the military courses every other Friday. Later, Marty went to a ten-hour workday to have every Friday off. We have been playing every Friday since then, now a tradition. We have had as few as one and as many as sixteen join us. Rod got out of the golf business, got his amateur status reinstated and joined us several years later and has been part of the the threesome fixture ever since.

We came to call it “FMG” for Friday Morning Golf. i wish i were better, more like Rod and Marty, but too many bad habits cultivated over thirty-five years keep getting in the say. i like to say my default is to the bad habits.

And of course, the Southwest corner allows to play throughout the year. Sometimes it can get a little foggy.

Sometimes we play elsewhere. Bonita is one of my favorite courses in the Southwest corner. i often go there to practice. Of course, the weather is terrible.

This morning, in  spite of our usual early tee time, was particularly slow. My golf was…well, horrible. i sat on a bench by the eleventh tee box, feeling disgusted with my front nine and three putting the tenth green while we waited for the green to clear. Then i looked out  at the vista past Rod and Marty discussing club shafts. It is the tenth of November. My Pacific is just past the trees. An admiral’s house is in the background. The marine layer hangs out at sea preparing for its evening landfall. On the holiday for Veteran’s day, the North Island runway to the right is quiet. Point Loma, not visible in the photo stands under the cloud bank. 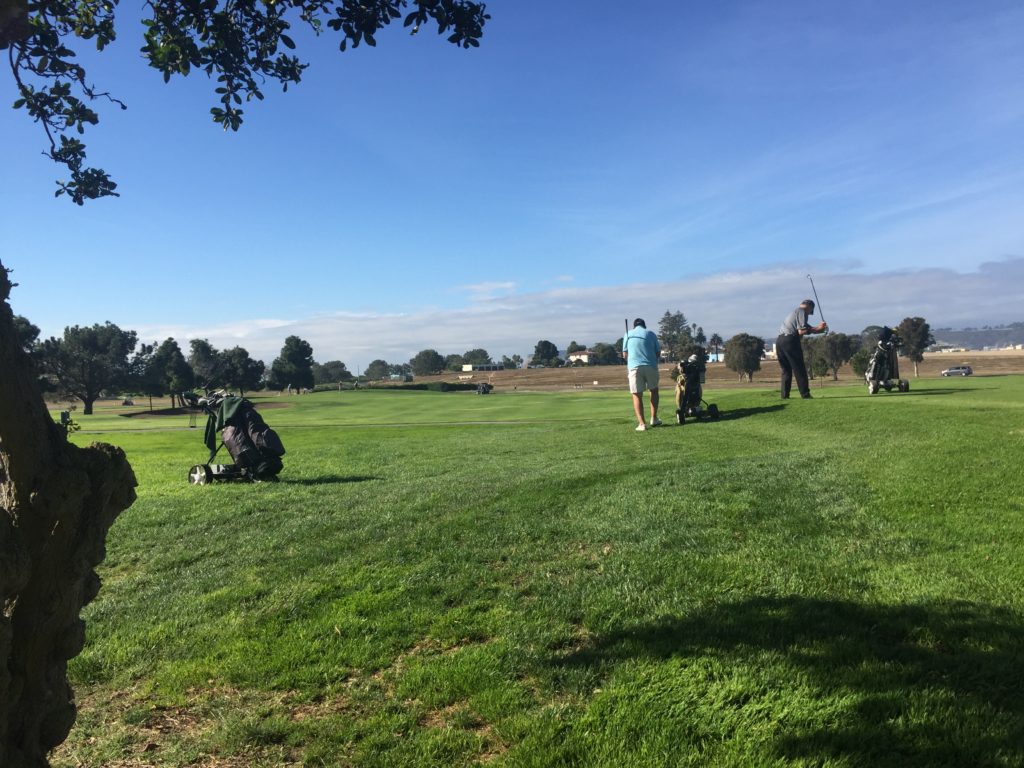 And i have found serenity here for twenty-six years…even when my golf is bad.