Back in wonderful, magical Watertown, New York in 1970, i gained a close friend named Earl Weideman. He was a teacher in the town where his family were long time residents. i was a sports writer and then sports editor of The Watertown Daily Times.

Somehow, we connected, probably through John Johnson, my Vanderbilt friend who got me my job, and then Earl and i ran around together frequently. He and i met for drinks at a nice bar downtown when i was accosted by a young woman when she found out i had taken part in the pizza rating contest two writers had conducted and written about in the paper. She was distressed that her favorite pizza joint finished last. We had to leave the bar. The story had run six months earlier.

Earl was the guy who celebrated the birth of my daughter Blythe with me. Back then, the dad was not allowed in the delivery room. They rolled Kathie out with Blythe just after she was born at 9:35 p.m. After i spent a brief time, all that was allowed, with them, i met Earl for a celebratory drink, which lasted way too long into the morning.

Shortly before Blythe was born, Earl took Kathie and me by boat out to the island his family owned in the Thousand Islands chain at the confluence of Lake Ontario and the St. Lawrence River. Earlier in the year, he had offered to drive us out to the island on the ice that formed each winter. i declined and probably would have done it the next winter, but my life had changed course, and i was back in the Navy before the next winter.

This photo was taken in front of the cabin’s fireplace. i am imitating Art Metrano, the deranged magician who frequently performed on “The Tonight Show” humming “Fine and Dandy” while displaying his fingers as if they were jumping from one hand to the other. 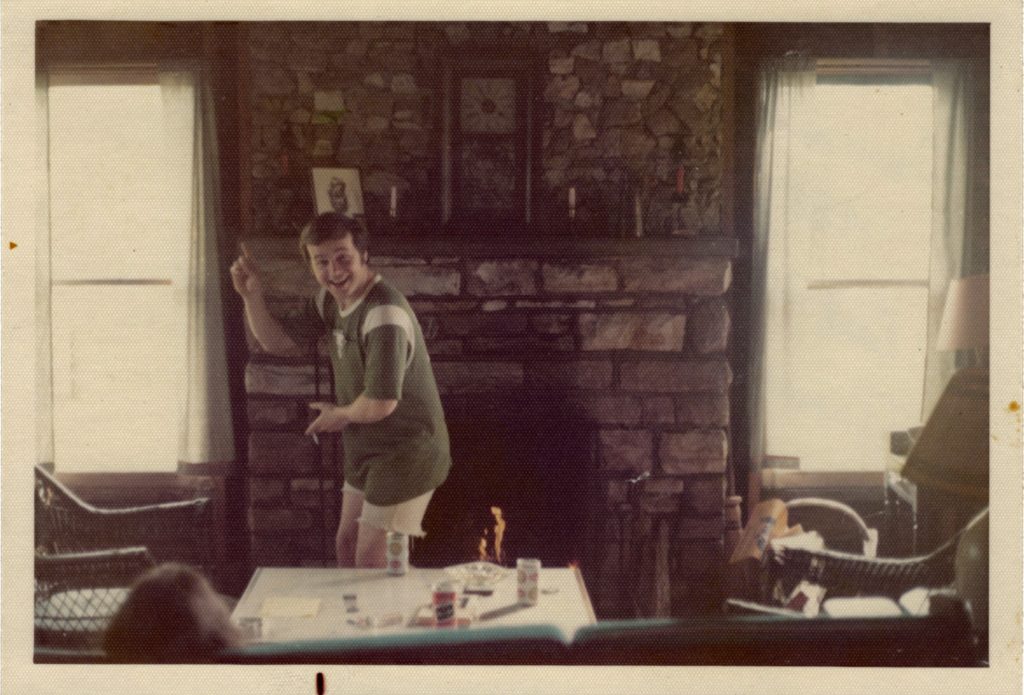 Earl was a perfect little goofy for being a school teacher. i wanted to remain his friend and stay in contact because he was so much fun and good hearted. But the Navy and life away from Watertown took over. We lost contact even though i thought about him a lot.

So when i was scanning this photo for filing and organizing, i decided to look him up on the internet. Earl died in 2005 after retiring two years earlier from his teaching position at Beaumont (California) High School. i could have been spending time with him easily as Beaumont is about eighty miles east of Los Angeles, roughly 120 miles from my home. His son apparently lives here in San Diego.

He has been gone almost a dozen years. i am suffering from delayed sadness. But boy, did we have fun together in Watertown a long time ago.

i won’t forget him.