It was finished yesterday. Sarah did about ninety-eight percent of the work. i put in maybe, just maybe fifty pieces. Maureen found one or two…i think.

It’s tradition. It’s connection. When we started going to Signal Mountain for Christmas in 1992, my sister would put out a difficult puzzle with a Christmas theme on a small table in the wonderful family room, pictures of which i have posted here. My father and i mostly would work on it; Martha would help but was mostly occupied, along with Maureen, with Christmas cooking, a marvelous treat of goodies for a week, especially the chocolate chip cookies she placed in the Santa Claus cookie jar on the kitchen counter. The aromas wafted through the house. i was known to stay up into the wee morning hours to work on the thing while ingesting a couple of dozen of those cookies. Maureen would attempt to hide one piece so she could put in the last one.

As the years rolled past, Sarah became more involved and is now considered the expert. She even bought several for Thanksgiving and completed one by herself.

Since we didn’t make that Christmas trip this year, Martha included a puzzle in her gift package. We cleared the breakfast table and shifted our morning meals, along with the big Christmas Day dinner to the dining room. i had to add the leaf to Aunt Ida’s round oak table for the puzzle to have enough room.

i worked on my few pieces (i found most of the white and green star ornaments on the tree and contributed a lot in piecing together Santa’s face and then mumbled a lot trying to put the other pieces together with absolutely no clue. As i did, i felt Daddy bending over the table on the mountain, griping about having just seen the piece that would fit in a certain place but unable to find it again (i actually said that once yesterday and realized its origin).

Now i am not usually into trivial pursuits. i’ve got a lot of things to get done in the years i have left, and daily tasks seem to have grown in numbers and time (this, of course, excludes golf from the discussion).

But folks this is tradition, a lovely one. And it crosses family generations. And it’s connection, connection to wonderful things. Below is a photo of this year’s finished product and a shot from farther away to give you a perspective on its size. 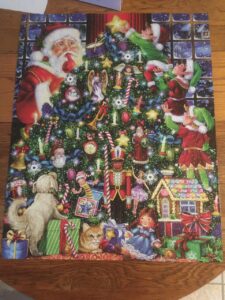 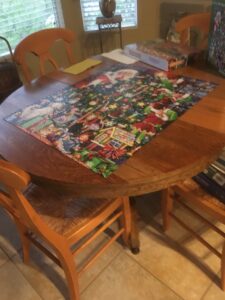 i hope all of you had a wonderful Christmas and have a healthy 2021. As i have said in one form or another in emails and messages in the last few days. We’re overdue for a good year.