i never met him.

It was March 1975. i left all that i had known, my Navy world of destroyers for the amphibious navy.

The divisions between the three surface groupings of ships were significant back then. The vaunted and desired Navy life on the greyhounds of the sea were forever in my past although i wasn’t aware of that at the time.

The service group were the workhorses: oilers, tankers, ammunition ships, sailing to ports for resupply and back to replenish the capital ships: ungodly hours, precious little liberty, and work in the harshest of conditions — fortunately, i never was assigned to a service ship, but who knows? i might have found it rewarding.

Then there were the amphibs. Not very pretty compared to my sleek lady warriors of the sea, they appeared to be…well, pedestrian compared to my thirty-five knot, gun-firing, submarine hunting, missile launching, wake frothing destroyers. i did not know much…no, i didn’t know anything about amphibious ships or amphibious warfare except for World War II movies. At the end of my chief engineer tour aboard USS Hollister (DD 788) , my last aboard destroyers although i did not know it at the time, a fellow officer and i stood on the starboard bridge wing while moored to Long Beach’s mole pier. i watched a big ship standing in and asked to a my friend, “I wonder if that is an LSD?”

It was not even close to  a Landing Ship Dock like the USS Anchorage (LSD 36). i had just received my “split tour” orders to the Anchorage to be First Lieutenant. Previously, up and coming surface officers, lieutenants and lieutenant commanders, were sent to the six-month “destroyer school” where they learned all they needed to know and a bit they didn’t need to know about being a department head on a tin can. Upon completion, they would be assigned to destroyers as department heads. But when i began destroyer school, the Navy began to make it a one-surface Navy. Most of the officers in my class were assigned “split tours” where we would serve eighteen months on a destroyer and the other eighteen on either a service or amphibious group ship.

So in early March, i headed down to San Diego to join the Anchorage as First Lieutenant. It was tough. My second father, Snooks Hall, had died unexpectedly at 61 from a heart attack.  With our move from Navy housing in San Pedro in progress and more importantly, my moving to probably the most critical billet on the Anchorage with no real idea of what i was getting into, and, oh by the way, deploying to the Western Pacific in less than a month, i could not go home to honor my wonderful uncle.

i can remember quite well sitting at the top of stairs in Navy housing shortly after i heard the news. i was moving household goods when it really hit me. i sat down on the top stair and cried for about ten minutes.

But back to business. When i reported to the ship a week later, yet another bit of bad news came. This time it was business. LSD’s had a billet for a bosun warrant officer. A bosun warrant is the creme de la creme of the Navy’s work on seamanship, boats, and any on deck evolution. A “bosun” is a deck seaman of the “boatswainmate” rating who has come up through the ranks because of acumen, talent, wisdom, and experience and become an officer in his specialty. They are the salt of the earth, or sea in the mariner’s vernacular. They are the connection to all things past: wooden ships, iron men, sails, rigging, on and on and on. A bosun is assigned to landing ship docks because he is the glue that holds everything operational together.

As i headed to the Anchorage, i was not just comforted with the knowledge of the First Lieutenant had a bosun assigned to his department, i was absolutely prayerful because, again, i did not know anything about the job into which i was leaping.

One problem. One of the first things i was told when i reported aboard was CWO4 Holsclaw had been transferred almost a month earlier. With no replacement! My source of knowledge, the guy i was counting on to pull me through my ignorance, was gone.

As i went through the relieving process, i assessed my situation. i had one ensign and one lieutenant junior grade as deck division officers. (i also was the department head for the weapons division with another ensign assigned there). The LTJG had one deployment under his belt, but that was his only experience. There were two boatswainmate first class petty officers aboard. One, BM1 Hansborough, led First Division and was the master of working the well deck with landing craft, Marine vehicles and Marine amphibians. One, whose name i shamefully can’t recall at the moment, was in charge of second division and a no-nonsense, hard-working rigger. i decided he could serve as my mentor. But then a week before we got underway, an LST in the squadron lost her boatswainmate chief (i don’t recall why) and the Navy decided my go-to first class should step in on the LST. He was replaced by another first class petty officer who was good, but not as a guru for an uninitiated first lieutenant.

There was one Boatswainmate chief aboard. BMC Justiani was the 3-M (preventive maintenance system) coordinator. He had fifteen years in the Navy. Nearly all was being a boxer in the MWR programs. If possible, he knew less than i did about amphibious operations.

So i went to sea in a brand new job of which i knew nothing. i was a pretty good officer and had become a good ship driver, but this was a daunting situation. None of us knew just how daunting it would be.

Fortunately, one LSD in amphibious squadron was designated as the “Primary Control Ship (PCS)” for amphibious operations. Anchorage, rather than our sister ship, the USS Mount Vernon, had been designated the PCS for the deployment. This meant we would have the Beach Master’s Unit on board. The unit was responsible for managing the beach during landings, and a bosun was the officer-in-charge. Bosun Messenger and his first class, BM1 Stubbe helped me a great deal through the first two or three months of unexpected chaos.

We had loaded a large opportune lift. Opportune lifts are done when space is available. Navy ships load up with equipment and supplies for other government entities who need transportation across the ocean. Goodwill items, Peace Corps Supplies, State Department needs, and even government officials personal goods are given a free ride. Then five days after a short stop in Pearl Harbor, we received flash messages the evacuation of Vietnam was about to begin. All the other squadron ships raced to Vietnam, while the Anchorage headed for Japan to offload the opportune lift and pick up Marine equipment. That saga requires another tale as does the rest of the deployment. It was nine months of non-stop tap dancing around changing requirements and operations always with a twist.

We made it. In fact, we did damn well.

i was first assigned a stateroom amidships before moving to the First Lieutenant’s stateroom on the starboard side. i don’t remember why. It was, i found out, Bosun Holsclaw’s old stateroom. As i opened one of the lockers, i found a small metal box. On the top the bosun had scribbled his name and rank with a felt-tip pen. It was his sewing kit, left behind.

We stood out of San Diego Bay and i retired to my stateroom after the evening mess in the wardroom. i sat in front of the desk and looked at the metal box. i envisioned Bosun Holsclaw. i thought he must have been a large man with a beer belly, balding, rough (all reasonable bosuns would have had a rough edge) capable of leaping tall buildings with a single bound and outrunning speeding bullets.

The sewing kit had a number of different Navy uniform buttons, two or three spools of thread, some safety pins and a cardboard sheet full of sewing needles.  Pretty much all of mariners who go to sea take such sewing kits with them in various quantities and cases. There in the middle of the Bosun’s box was a tiny, elementary-school size pair of scissors. i wondered why a bosun, probably carrying a five-inch knife on his belt holster would feel a need for such a rather worthless pair of child scissors.

It is forty-two years since i first wondered about those scissors. They are long gone. But i have used Bosun Holsclaw’s sewing kit through six deployments, seven home relocations, and an untold number of pants and shirt button repairs.

This afternoon, i finally got around to replacing the button on a pair of golf shorts.

i went into the closet and retrieved the metal box. i found the needles, the right thread, and a replacement button. The repair job was decent.

But throughout, i thought of Bosun Holsclaw and thought how much he would have enjoyed those nine wild months of a WESTPAC deployment with me.

Good luck, Bosun Holsclaw, wherever you are. 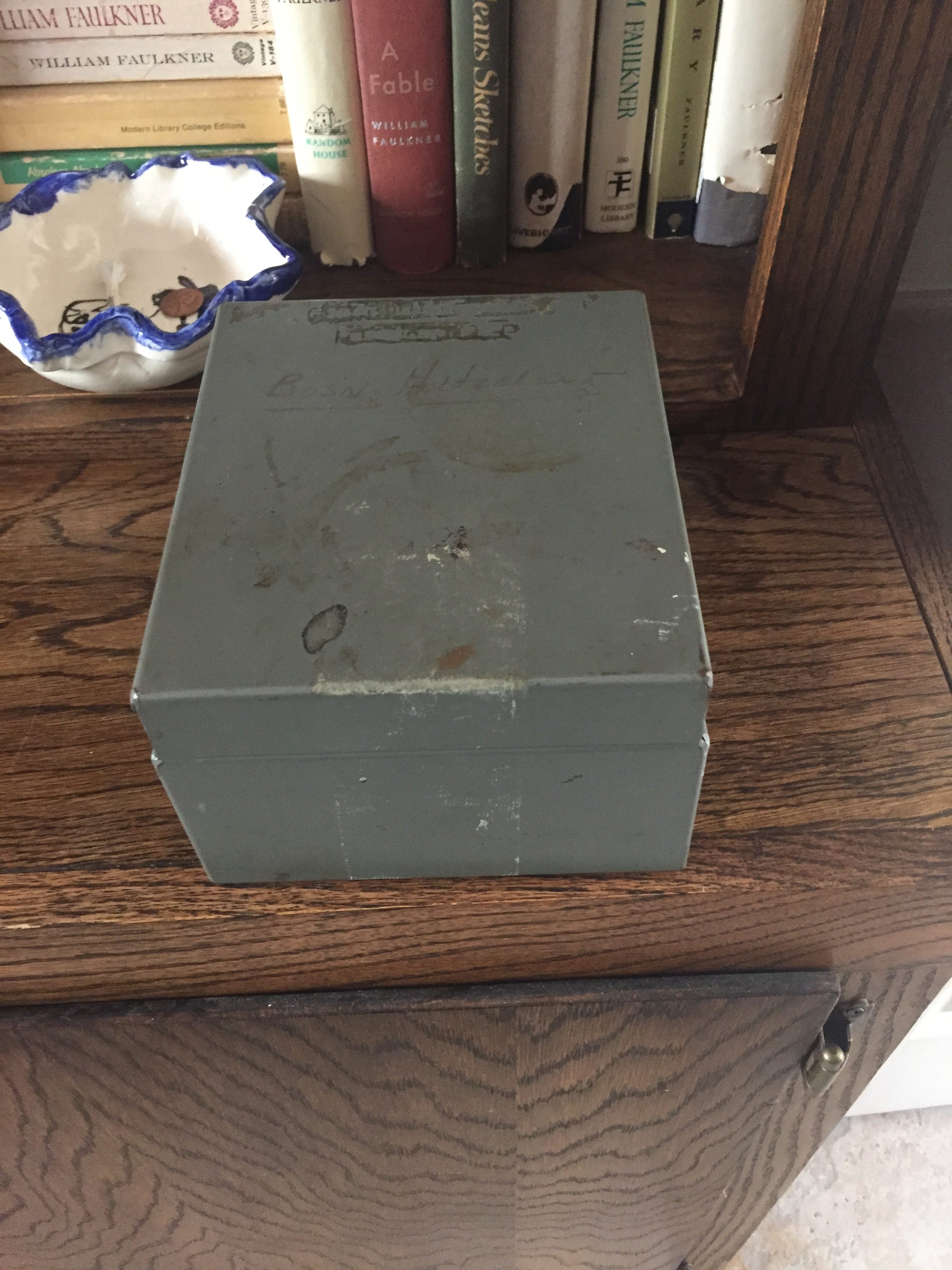