i just flat forgot Lebanon, Tennessee is quite a bit different from the Southwest corner.

You see, i was trying this thing out. It had not been successful before, but i thought might pull it off until i hit my hometown Tuesday.

In 1979, Amphibious Squadron Five was going to be at sea for three weeks before hitting its liberty port of Hong Kong. i decided to attempt to grow a mustache and a beard. i would look in my mirror above the sink in my stateroom two, three, or four times a day rubbing what you could call stubble or fuzz to see if it was growing. The night before we entered the harbor and moored, i looked one last time. i asked myself would i let myself go on liberty with a growth like that on my face and admitted i would not.

i shaved the feeble attempt at a beard that night. i kept the poor excuse for a mustache. The later eventually became marginally acceptable.

i should have known. i got my head hair from the maternal side. It’s gone now, like theirs. It was going then, but i was too stubborn to admit it. For some reason i cannot fathom, i got my facial hair from the paternal side. My father could not shave for a week and no one would know. Of course, he shaved every day. In Lebanon, Tennessee from oh, the 1920’s  until i left in 1967, facial hair, even a mustache was considered a capital crime — i was always wondering how Col. Brown, my calculus professor, and Col. Ingram, the commandant at Castle Heights could get away with mustaches. i think it was because Col. Brown actually had been an army colonel, and Col. Ingram was from Virginia, and folks in Lebanon probably considered him a foreigner.

My brother grew a beard once. i thought it was sophisticated looking. For another inexplicable reason, he got more lasting hair on his head and more than fuzz on his face. He looked cool. Our father thought it looked shaggy.

My son-in-law, Jason Gander has magnificent facial hair. His beards are of mountain man stature. i think that is because he is from Kansas.

But me, not so much.

i tried again about ten years ago. Then, my beard was splotchy and thin, but passable i thought, until i looked sternly in the mirror and confessed i was fooling myself.

i shaved again that night.

i should note i have kept my mustache because my greatest success with women was when i had a mustache. More importantly, my wife liked it until she allowed me to shave it about two years ago. When my grandson Sam saw me shortly after i was shorn, he told me he missed my mustache. It’s back and will not go away…for my wife and my grandson.

Over the last two years, i have been too lazy for three or four days and believed my facial hair was getting better, i would not shave for another week or so and then give up.

Then sometime in late November, i forgot to shave again for several days. i decided to let it go. i told Maureen i would keep it until it was time to go to Tennessee for Christmas and then decide whether to keep it or not.

i kept it. It’s not really a beard. Too splotchy. It would work if i were around Civil War time. Some of those guys had impressive mutton chops. That’s what i would have had. The bare spots are just above my chin. There is another problem. My left side is pretty constant in thickness…er, thinness, color, i.e. white, and the bare spot has grown in or over. The right side is in a muddled state, thick and thin, and a mixture of brown and gray. It also grows out rather than down my face like the left side.

i began to like it. Folks in the Southwest corner have had different opinions about it. Some like it. Some look at it with a look of disgust. i told them it wasn’t really a beard. It was a “beardette.”  However after a dinner with friends one evening, Maureen told me i looked sophisticated, academic. That was enough to keep it, this beardette.

But then, i went to see my friend, my almost brother Henry Harding and his wife Brenda. When they saw me, i saw the look of surprised dismay on their faces. i realized Lebanon hadn’t changed that much.

In several days, i will meet my sister at her home for Christmas. i did not want her to look disgusted or possibly have a heart attack when she sees my beardette for the first time. So  i’m posting a couple of photos of me and my beardette to ease her into this.

But i think it’s going away after i get back to the Southwest corner to never return again. 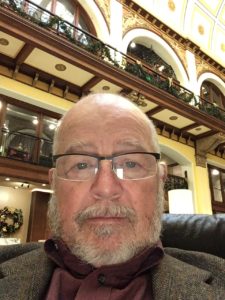 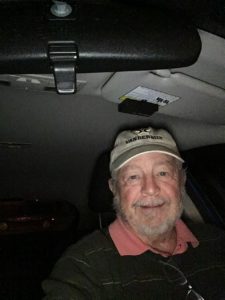