This Willie Nod poem was written for Blythe after my adventures in Somalia while aboard the USS Yosemite just after the 1984 New Year. That yarn is already done elsewhere and will be retold in my book about that tour. However, the poem was generated by a drive across the equator to a dinner with a Somalia plantation owner. It did look like West Texas to me, and our chauffeured early sixties Datsun damn near ran into a camel in the middle of the road that was eating the leaves off of an overhanging tree. The ship did go south to Mombassa, Kenya after the stop in Kismayo, Somalia…but Willie nor i talked to any elephants.

Willie Nod in a Foreign Country

Willie Nod
off and went to Somalia,
a land on the equator that looks a lot like West Texas;
he took no friends with him
because he hoped to make new friends;
unlike West Texas, he found Somalia
had lots of people and animals.

But then, Willie Nod did not wander off the road in Somalia;
he figured they might have snakes like West Texas,
and
although Willie Nod liked animals
and
could converse in most animal languages,
he hadn’t quite learned to handle hissing.
so, Willie Nod stayed on the road.

since there seemed to be only one road in Somalia,
Willie really didn’t know if all of Somalia looked like West Texas
except for all the people and animals
walking along the roadside and sometimes in the middle of the road.
from that one road, Willie Nod saw herds and herds of camels and goats;
there even were packs of wild boar with fierce-looking tusks
standing along the side of the road chewing grass. 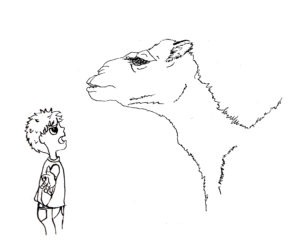 Finally, Willie Nod, being a lover of animals,
could stand it no longer
and
stopped when he came upon this one lone camel
standing flat in the middle of the road
reaching for some leaves high in a tree overhanging the road.

Now, Willie Nod fancied himself quite a talker with animals,
and as a general rule,
he could talk with animals about as well as anyone:
he quacked with ducks,
roared with lions,
neighed with horses,
and
silenced with rabbits.

But even though
Willie Nod wanted to talk to camels, especially this one,
standing in the middle of the road,
he had one big problem with camels,
which wasn’t the same problem he had with snakes
(he wasn’t really too hot about learning how to hiss):

He just wasn’t quite sure how camels brayed.
he had brayed with some donkeys down in Mexico once,
but
camel braying was a great deal different from donkey braying.
Willie Nod’s problem with this particular camel
was made worse by the fact camels,
unlike donkeys (or for that matter, ducks),
are really quite dumb.
i mean, would you think anyone smart would stand
in the middle of the road to eat leaves off of trees?

So Willie Nod looked into the big, soft brown eyes of the camel
and
tried out some braying on him;
but
the camel just looked at him with those big sad eyes,
cocked his head to one side every now and then,
and
rolled those big lips up to show his bucked teeth.

When Willie Nod finally figured out he wasn’t getting anywhere,
he just headed on down the road, the one road in Somalia.
he didn’t stop anymore to try and talk to the wild boar,
or goats,
or even the people
using the road, or rather the side of the road.

Willie Nod decided to go see all the lions and elephants in Kenya
(he really wanted to try and talk to the elephants)
south of Somalia.

Willie Nod decided Somalia
really wouldn’t be all that bad if you liked West Texas
and
knew how to camel bray.
because there sure were a lot of camels to talk to.

Willie Nod was glad he visited Somalia
but
he wasn’t too anxious to go back anytime soon.

1 thought on “Willie Nod in a Foreign Country”