This was to be a quiet day. Our annual trip for the Fourth of July Parade around Sonoma Plaza did not happen this year. Traveling to be with family or friends just proved too difficult. We decided we would go to the beach but then considered the crowds and the parking (old age wussiness) and opted for a quiet day.

As i write, Maureen is at yoga. i may do a walk/run (mostly walk) and exercise. We will sit outside in the shade. i will take a nap, Maureen maybe. i will grill burgers tonight, and we will watch the Padres play the Indians unless it becomes unbearable. And some time today, i will walk to the top of the hill and reflect on freedom, what it means and what it costs. And i will be thankful. That’s it.

After Maureen left and i had read my emails and checked Facebook, i decided to continue my organization and clean out efforts in my office. Writing this book spurred the efforts.

Then i ran across the box i had placed on the book shelf to get it out of the way until i could address it properly. There are probably a hundred of these boxes of various sizes somewhere in this office or the garage. This one came from Mama Jewell through my Aunt Naomi Jewell Martin through her son and my cousin Maxwell Martin through my daddy to me. It is 8 1/2 by 10 1/2 inches and 3/4 inch deep. 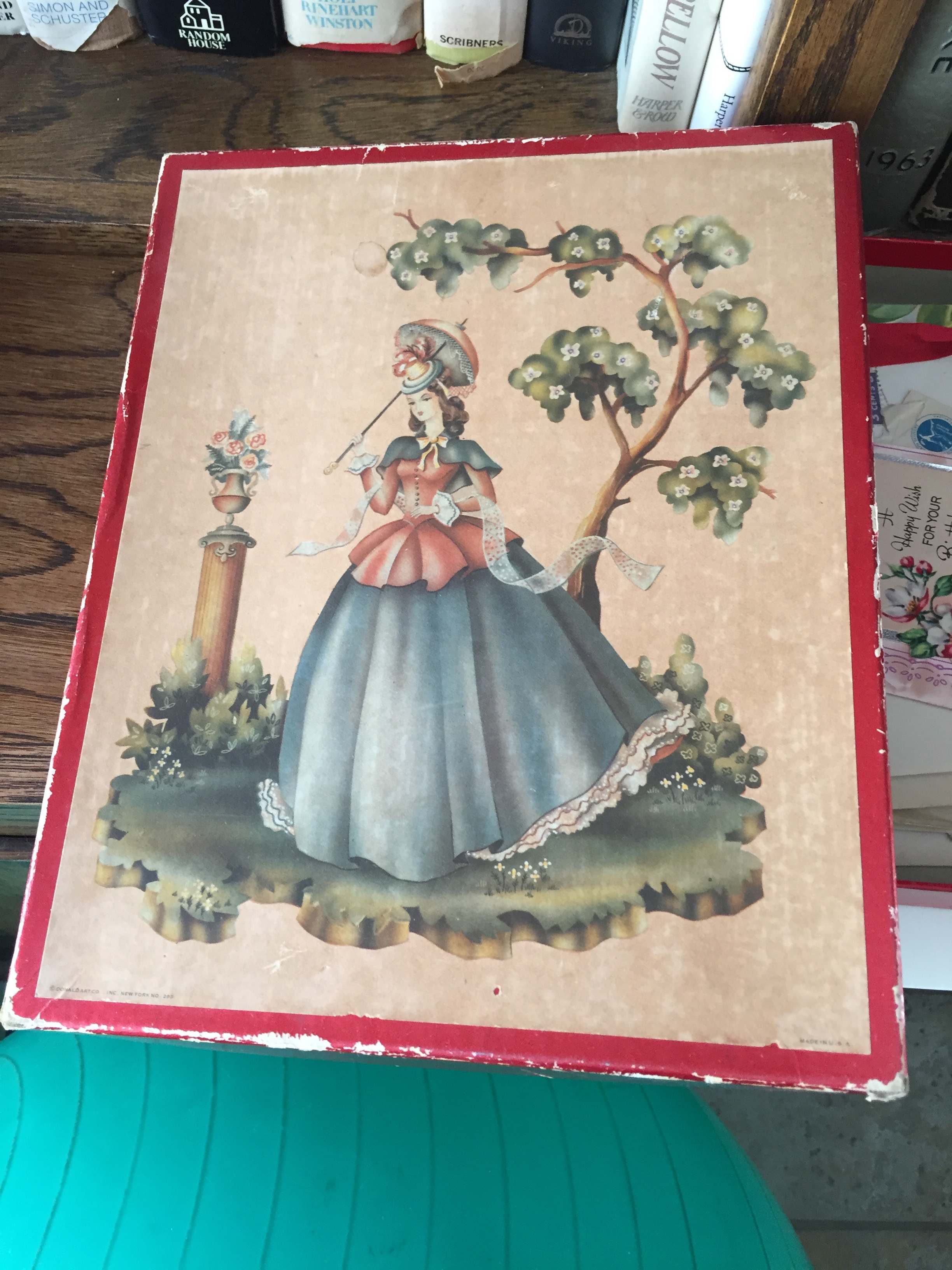 It was in a bigger box with other “memorabilia.” Like many boxes of old stuff passed along through the family, the stuff in it seemed to have been begun for a specific purpose but other things ended up being included. It appears this box was originally used by my maternal grandmother, Carrie Myrtle Jewell, for holding letters and cards after she filled in a cloth covered “post card” album.

i started going through it but confess i would occasionally lose it and have to stop with a deep breath.

There was only one she wrote. i’m not sure how it got in there. It was a four-page letter to her sister-in-law, Vera, or from the envelope address Mrs. W. A. Orrand in Murfreesboro. It was dated two months to the day before she died at age 70. Her handwriting is shaky as old folks age and become more infirmed. She writes about surprise another relative died and how she had to learn from The Lebanon Democrat, chastising Vera for not letting her know sooner, but admitting she was too ill to go the funeral in Nashville. She tells of it being a “real pretty day” with the sun shining, and how that makes her think of “Argless” staying busy hauling wood.

That’s one stop for breath. i tried to remember her more completely. i was seven when she died, but i remember her smallness, her white hair, her glasses, her smile, and how much she cared for me.

i remembered her calling my other grandmother across the street in autumn of the previous year. Mother had gone to do some part-time work and Granny was keeping the three children at our house. i was walking home from school with a group of schoolmates. Another boy from my first grade class, Ronnie Collinsworth, picked a fight with me when we got to our front yard. i won the fight and Ronnie ran home up the street crying. Mama Jewell called Granny to tell her she had watched it all and Ronnie had started the fight and i won fairly and squarely and shouldn’t be punished.

i remember how warm she was when she held me.

I tried to remember more. i tried to remember what she thought, what she was really like. i mean she got married in Statesville, a village southeast of Lebanon, at seventeen, bore seven children (the last passing away just a month after her birth) over twenty-four years, and cooking on a wood-fired stove for a great portion of her life.

i couldn’t remember more. There’s no one who can tell me more about her. It’s all in those cards, letters, and photographs. i took a deep breath.

The second stop for breath was for something even less tangible. It had been thrown into the box at some time during some move, obviously not part of the intended purpose of the box. It was my grandfather’s last wallet and a few more personal things. 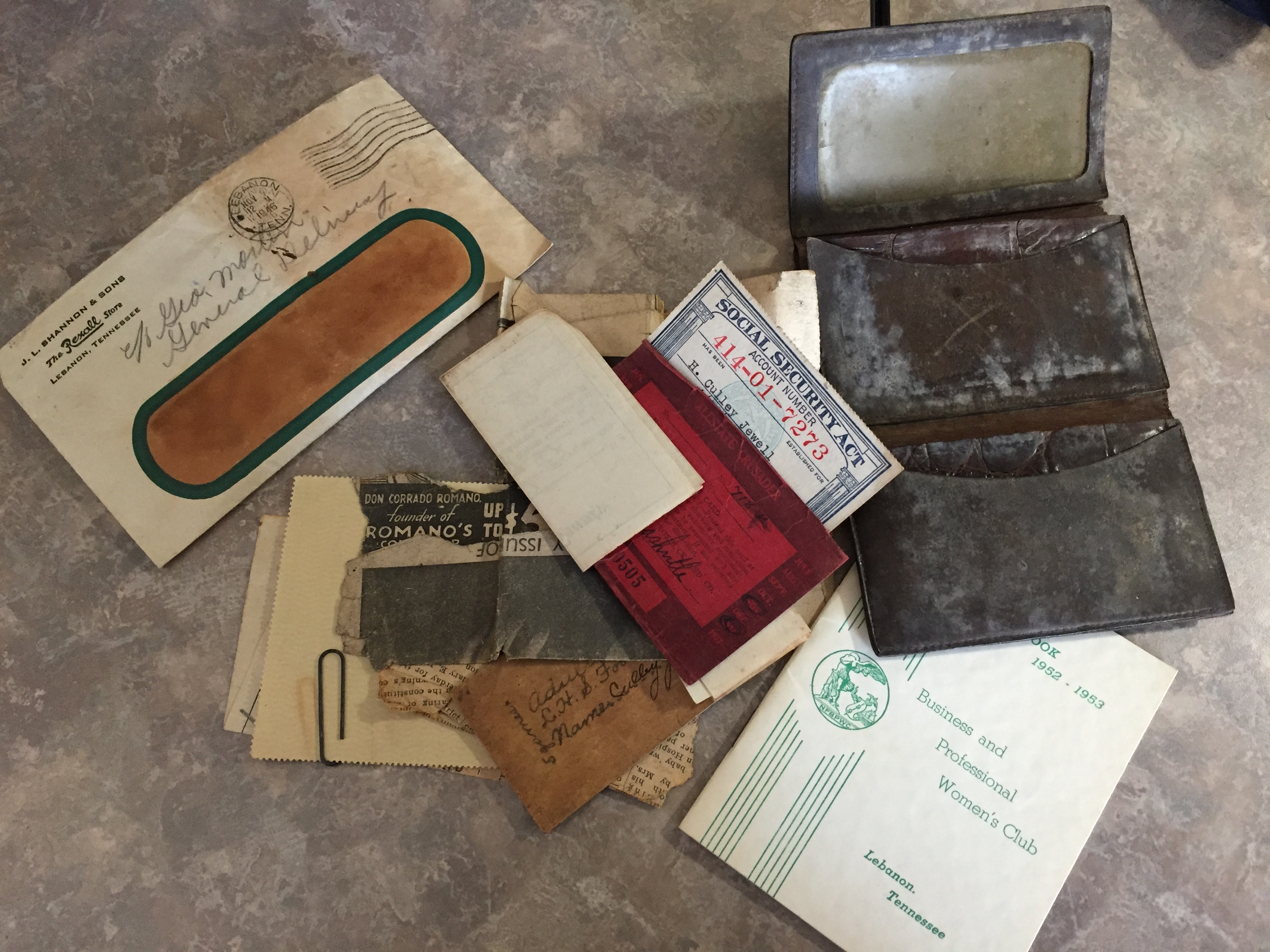 My grandfather’s wallet did not contain a driver’s license in the pocket provided. Hiram Culley Jewell contracted tuberculosis around 1933-1934 requiring my father to bypass his senior high school year to help support the family. My grandfather passed away in 1939. His last public appearance was at my parents’ wedding in July 1938. Tennessee did not have a law requiring a driver’s license until 1937  — since my father was an well-known automobile mechanic and had been driving since he was 10 (1924), the DMV or whatever agency it was back then, didn’t require him to take the test — and didn’t have an exam until 1938. Hiram Culley never drove after they required the license.

There were newspaper clippings folded inside. i searched for a name on the news articles that might give me a clue why he kept the clippings. Then i turned them over to find ads. One was a Greyhound bus ad touting how cheap and fast travel by bus was compared to driving ($3.55 round trip between Nashville and Chattanooga, among 19 destinations listed). The other was an ad from Don Corrado Romano appealing people to send old coins into his coin shop in Nantucket, MA for the possibility of being given up to $5000 for “old money.”

There was a slip of paper noting his being a registered voter in the 10th District of Wilson County. There was also his social security card issued “4/23/37.” That was the first year registration and payment into social security was required (Roosevelt signed the Social Security Act into law in 1935). Written on the attached slip was: “Gulf Red Cedar Co. of Va., W. Spring Street, Lebanon, Tenn.” The family home was on West Spring Street, but in 1937 i’m pretty sure there were no businesses. Why would that be attached to Culley’s social security card?

There was a card the size of a business card faded brown. “Adult Season Ticket, L.H.S. Football 1934, Name Culley Jewell.” Below was “I.C.P.” Along the side was “5 games.” What did “I.C.P.” stand for, i wondered. Was that the only season my father played football for one play or was that the previous year?  Or was Culley just a football fan like my father and went to all of the games? There was no one i could ask.

This was a deeper breath. i didn’t know either of my grandfathers. They both died before i was born. i think often of what they were like, how they thought about things, how time and place might have shaped their thoughts compared to mine. The papers only made me thirst more to know them, something that will never happen.

Folded next to the wallet were two papers the size of a check. They were notification of payment. The papers were not related to my grandfather’s wallet. Both papers were dated April 28, 1951, ten days after Carrie Myrtle Jewell passed away. Life and Casualty Insurance Company had sent a check for $203 to Ligon and Bobo Funeral Home. i assume the paperwork was to inform my family this was part of the payment for the funeral. Again, there no one to ask.

It is an empty feeling, not knowing. i wonder how 66 years after i am gone what pieces of paper will remain, who might wonder what i was like.

i thought of throwing all of the box away. No one except me would have known. If it were mine, sixty-six plus years from now, i would be fine with someone tossing my stuff. But i can’t do it. i will rebundle it and pass it along, perhaps dividing it up. There are a lot of family coming from Hiram Culley and Carrie Myrtle Orrand Jewell: six children, a number i can’t count of grandchildren, great grandchildren, and even great great grandchildren who might be interested.

i close it all up, put it all back in the box and put it in the plastic bin marked “Memorabilia, Various.”

Yes, it still seems sad to me.

2 thoughts on “Thoughts About Folks Gone”