The Tuesday routine is set.

i get up early. i’m programmed that way. i believe, probably falsely, it’s the product of so many morning watches (0400-0800, but not really: i was awakened around 0315, got to the bridge and relieved the off-going watch by 0345, and because of breakfast and the morning routine was relieved by 0700, three and a quarter hours or watch standing; not bad, but man, did i need a NORP by the noon mess), but i suspect it’s more likely produced by going to bed early.

Regardless, i awake, get ready, make coffee, collect the trash and recycle receptacles from around the house and the garage. i take a up of coffee to the garage, get the supplies, come back in the house, replace the litter bags in the cats’ two litter boxes, then take the old bags out to the front. i retrieve the yard waste recycle bins and put them off the curb. i move the trash bin to the front of the garage and empty all of the smaller containers into the big black bin and set it alongside the waste bins. i collect the newspaper, sort it (all that ugly news stuff for Maureen, sports and comics for me), retrieve the recycle bin from the side yard and deposit all of the recycle stuff, and once again, move the bin along side the other three.

My day has begun and the normal daily routine of setting the table, putting away the clean dishes goes into effect. 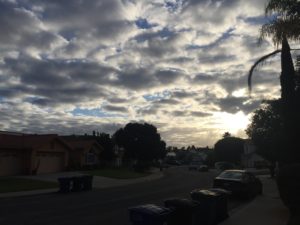 This morning, it was cloudy with only a few holes of light blue emerging through the gray after first light. Cool…well, cool for here, 55. Need rain. The Southwest corner folks are like farmers back home, watching the weather. Reminds me of Commander Lou Aldana, my first Commanding Officer aboard USS Anchorage. When i first reported aboard March 1975, Lou informed me, “You are just like a farmer: any time it’s not raining, they are working in the field; when it’s not raining, you will have your deck department painting everything exterior. And we did until we got to Hong Kong and gave Mamazan Mary a bunch of brass for her crew to paint out the ship for us.

This morning, i was not thinking about Hong Kong. It seems a long, long way away in time and space. It is. i was thinking, of all things, about Abraham Mazlow. You remember him, don’t you? He’s the guy who came up with the theory about the hierarchy of needs. You see, the top level of that pyramid of needs is self-actualization where i am working at a level which gives me personal satisfaction of doing the job well…or something like that. i thought it strange i reached a level of self actualization by taking the garbage out. But i do enjoy it, the whole thing, although occasionally i wish Jake Hughes were still around.

A few folks in Lebanon may remember Jake Hughes. He was our garbage man long before the city’s brand new and shiny (for a very short time) garbage trucks put him out of business.

Seems like when Jim “Beetle” Harding and i began our summer work for Jessie Coe at the city’s public works department, it was a toss-up as to what work we would be assigned. This, of course, was after we took the mini-scooter with a bed on the back and drug the big dead dog  out from under the porch, took it to the dump, returned to where the driver, aka me, hit the railroad tracks just west of the square on West Main too hard, launching the vehicle and it’s two occupants, when there was only suppose to be one, into the air and down on the fire hydrant outside Henderson’s Florist shop, slamming Beetle’s head into the frame of the cab while somersaulting me through the plastic windshield knocking me out and coming to with a beautiful blonde nurse who had been buying flowers holding my head in her lap and i swear for a few seconds i was in heaven tended by an angel only to be loaded into an ambulance with Beetle and being given crap by one selfsame Beetle for driving like a maniac and both of us laughing hysterically thinking of how Wilson Denny (that was his name wasn’t it, Henry?) would be pissed when he learned the mini-pickup scooter he considered his own had been wrecked. Outcome: Beetle had quite a few stitches on his forehead, which the cab frame had gashed open; i had some clamps on my right eyelid, which you can still faintly detect, from the plastic or the parking lot gravel engaging my head after the somersault out of the front of the vehicle.

Well, it turns out i went to the water treatment plant out by the river on Hunter’s Point Pike before becoming a grave digger for three summers. Beetle was assigned to a garbage truck for a short while.

Regardless, back to Jake. Jake had a wagon bed with car tires installed instead of wagon wheels. The contraption was pulled by Jake’s mule. Every Tuesday, Jake would pull his wagon up to the front of our house, walk around to the backyard, retrieve our trash can, take it out to the wagon and deposit the contents into the bed. Then, he would return the  trash can to its proper place. i’m told, and i believe, Jake got rich doing that before the city took his business away. His place was out on Hickory Ridge Road and as you drove around a bend, you could smell Jake’s pile of garbage. It’s a real nice house now. i don’t know who owns it, but there is no longer that aroma around the place. Good thing, too with it being so near the new high school.

Did i mention Jake had a darker skin tone than mine. i admired the man, his hard work, his ingenious wagon with car tires, and the mule. i’m glad his hard work was rewarded. i am sad i did not get to know his family.

But my whole point was not about Jake Hughes or Beetle’s and my wreck, or the garbage truck, but about ole Abe Mazlow and how i related this morning when i went out in the dark and gathered the bins and collected the trash and looked down the street and up into the sky where the sun slinging low on the Mexican border’s horizon could only give it’s morning’s soft glare from behind the gray clouds and how, somehow how everything seemed right with the world and ole Abe was right: that self-actualization stuff is real, no shit something we can all achieve even at routine daily tasks if we let it take us there, that top level of the pyramid. 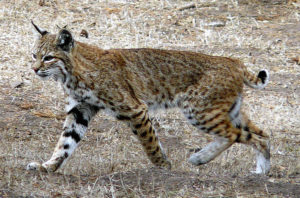 Yesterday afternoon, i was reminded of how close to the way it used to be. i am constantly reminded of this and recently had an exchange with my sister and brother about which location, Signal Mountain, Vermont, or the Southwest corner had the fiercest wildlife. i think it was a draw. Out here i talk of coyotes with whom my old lab loved to chase and scared the hell out of a whole bunch of them. But we have hunters out here in droves. Southwestern Rattlesnakes, Hawks, falcons, foxes. And just to prove my point, i was in the kitchen yesterday with Sarah’s dog Billie Holiday when i looked out the breakfast room window. There in the middle of the backyard, strutting around as if he owned it, was a bobcat. i would have taken a picture, but i was too busy trying to keep Billie from crashing through the window. So i hit the internet to come up with a photo of one. This one yesterday, except for the backyard green grass looked just like this. He was about average for bobcats, about two-fee tall and weighing about twenty pounds (We had one here about ten years ago who ruled the neighborhood; he was huge, more like three-feet tall, and i’m guessing about 35-40 pounds). This one yesterday looked up when Billie went beserk, shrugged his head as if to say, “Come on out here, dog; i’ve been needing to shred me some dog meat.” Then he casually strolled to the back of the yard and then cleared the six-foot fence with a graceful bound. Impressive.

He was a reminder we are not far from a harder existence than we have now. The Southwest corner was not a kind place to live for many years. Then, the weather, the bay, and lord knows what else, lured folks to move here, add water from mostly Arizona’s Colorado River, and grow and grow and grow, and  the development men built houses where houses weren’t intended to be but it met a demand and lined those development men’s pockets with silver and gold, la la, la la, la la, te da.

Now i am not so much of a romantic to wish we could go back to those earlier years. This place is a pretty damn nice place to live. But every once in a while, like when a bobcat strolls through the yard on his afternoon outing, i think of how beautifully wild it must have been.