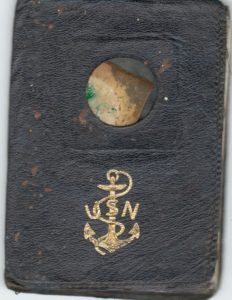 It is three-by-four inches, black leather bound. The traditional fouled anchor was more than just a chief’s emblem in 1944 because it is in gold seal on the front of this packet carried by a machinist mate, automotive, second class petty officer in  the 75th Construction Battalion.

i am not sure  how Jimmy Jewell first obtained it, but he carried it for over two years while in the Southwestern Pacific during World War II. i guess he either bought it at the PX in Gulfport, Mississippi while literally waiting for his ship to come in, or his wife, Estelle, sent it to him with all of the photos already in their enclosed jackets.

It was in that baby blue and faded pink “Deluxe Baby Gift Box” that once contained “Baby Powder • Baby Cream • Baby Soap • Baby Oil” by “Johnson & Johnson” with locations in “New Brunswick, N.J.” and “Chicago, Ill.” i’m guessing someone gave the gift box to my mother for tending to me while he was gone, and when he returned home in December 1945, he noticed the six-and-a-half by nine by two-and-three-quarter inches empty box was just the right size to store photos and memorabilia from the war, many of which shouldn’t be shown to polite folks.

i don’t know where he kept it, but in 2003, he gave it to me. i’m sure he had forgotten about it, and ran across it when he was moving with his wife to a smaller home after living in their home for sixty-two years. i think i just happened to be there when he found it and didn’t know what to do with it. So he gave it to me.

There are many treasures there and many still should not be shown to polite folks. But this one is special. 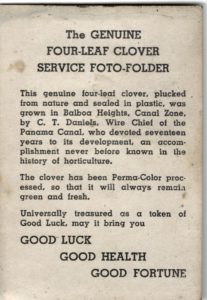 The cover’s pocket above the insignia has some kind of transparent protection. According to the explanatory note inside, the pocket holds a four-leaf clover, the work of the Panama Canal Zone “Wire Chief.” The process for preserving the clover is explained, but after seventy-three years, it has lost most of its green and slid catty-wampus in its pocket.

Apparently, it did as promised with the blessing of “Good Luck, Good Health, Good Fortune” and brought one Jimmy Jewell through New Caldonea, Guadalcanal, Bouganville, Banika, New Guinea, and Leyte with the enemy always coming close but not too close.

Through it all, he carried this little leather packet of nine photos and the card explaining the four-leaf clover. i imagine it in that small left breast pocket on the dress and undress blues, but i don’t think they wore them very often, if at all, once the liberty ships landed in Espiritu Santo, the New Hebrides island where the indoctrination to Southeast Asia began. 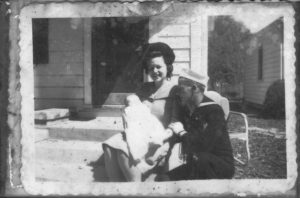 All of the photos have faded. i suspect most of the degradation came from the tropics in that corner of the world. It is not a kind place for any kind of equipment or treasure. The first photo always stirs some deep emotion with me. i have doctored it a bit here. It’s the little bungalow they rented in Gulfport in May. i surmise they must have rented two. Aunt Naomi, his older sister, was a major contributor for the drive in her car with the new tires, rare because of the rations, Bob Padgett loaned her for the trip. Friends and family threw in their ration cards for gas to ensure they could make the round trip journey. Somewhere in these piles of memories, i recently found a photo of my grandmother with me suggesting she was on the trip as well. So i’m thinking the other two women shared a room. i keep thinking they were women who did not play by the rules of then. 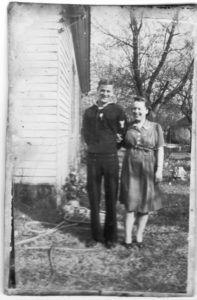 The second and third photo in the packet shows where his heart truly lay. The first is the two of them next to his parent’s home on West Spring Street. By the swell of her abdomen, i’m thinking it was his first return in late September/early October when he had finished boot camp at Parris Island and was on a round about trip to Davisville in Rhode Island. And then, the second photo of the couple about two months later. November perhaps. 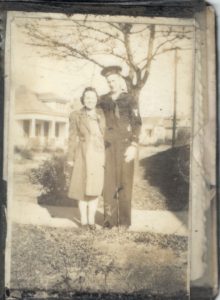 He had completed his training and was headed to Gulfport to await for the inevitable call to board a ship and head out to places he could barely imagine. After all, his life experience had been in  Middle Tennessee with trips to Gatlinburg and Florida. That was about it. But crossing oceans were about to provide him a look into a world he could not imagine.

Estelle looked marvelous for someone into her sixth month of pregnancy. She loved him with  no reservations. When she was fifteen down on South Cumberland Street , she was visiting her mother, , who held a 24/7 job — They didn’t call it that back then. They might have said,  “Mrs. Prichard works around the clock nursing people to provide for her children since their daddy passed away two years ago.” — The visit  coincided with the young man in his bib jeans walking home to West Spring Street from the high school where he helped his father in the janitorial tasks. She pulled her mother out on the front porch as he passed by. She wanted her mother to see the man she loved. 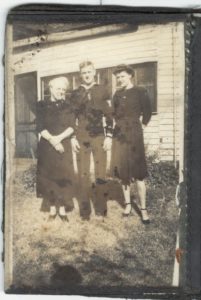 He had other women in his life. His stately and elegant older sister Naomi lived at home and worked as an operator at the phone company office over on Gay Street, walking there every day. i wish i had asked if she worked seven days a week. i suspect she did, and i know the pay was paltry. He dropped out of high school before his senior year to work at a motor car company beginning with washing vehicles and changing tires. Between his $13.00 a week salary and Naomi’s, they kept the family above water. Culley Jewell had contracted tuberculosis in 1934 and could not work until he passed away in 1939. So Mama Jewell, Naomi, Jimmy and the youngest brother Huffman lived in the family home. 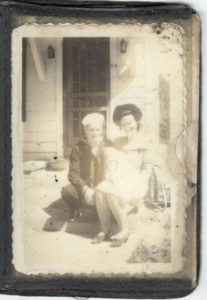 The fourth photo was another shot from the Gulfport trip. i was pretty small, but they obviously were proud of me then. They knew then Jimmy would be leaving soon, getting on that liberty ship. They did not know his ship ( i regret he never told me her name) would head through the Panama Canal up to San Francisco where they would embark the last of the 900 troops on a ship designed to hold 550, and then sail west for a month to Espiritu Santo, one of the southernmost islands in the New Hebrides chain — it was the jumping off place for allied troops into the war and the fictionalized location of “South Pacific,” the musical developed from James Michener’s Tales of the South Pacific. 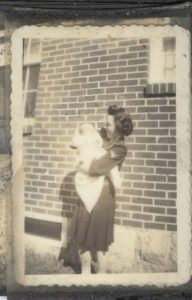 Next is a photo of my aunt holding me back in Lebanon. Bettye Kate, Estelle’s youngest sister, and her husband, Alvin “Snooks” Hall, were very close. When Jimmy, James “Pipey” Orr, and Bill Prichard went to war, Snooks, deferred because he was a farmer in Shop Springs, became the male support for the women of the Prichard clan. In the mid-1950’s, he partnered with Jimmy for “Jewell and Hall,” a vehicle maintenance shop and a gas station (Mobile petroleum products featuring a sign in front with a rearing Pegasus). The two were best friends, almost as much brothers as the sisters. When several of Jimmy’s long time fishing partners passed away, he talked Snooks into fishing. They did almost everything together along with their wives. Aunt Bettye Kate was my second mother. 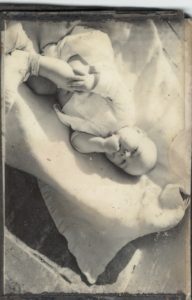 Then there is a photo of just me, i’m guessing four months. Today, i look at it and am amazed how i’ve returned to my origin: chubby body, fat cheeks, bald head. It is upside down in the packet. i try to imagine him in the jungles of New Guinea (i’ve been there and can attest there are jungles, plenty of them, dark with vegetation) where at night, the tree rats would crawl across the sleeping seabees in their tents. i think after he got out his flashlight to scare away a rat, he would reach into his clothing and pull out the packet, turning it to this photo, turning it to the side to look at his son. i hope, lord i hope, it made him smile, gave him some hope, made him think about that little place across an ocean and a continent he called home. Yes, i hope i helped him just a bit. 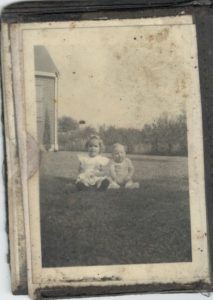 The last enclosed photo in the packet reveals the Prichard family closeness. When the men became husbands and the woman became wife of the Prichard’s, they immediately and forever became family. He was. And his love for family shows in this one. Nancy and Johnny Orr in the side yard of his home, the first of the next generation of the Prichard clan. He held them dear, treating them as his own, and they in return, calling him “Uncle Jimmy” and the other “Uncle Snooks” but knowing they were more like fathers in the queue more than just uncles. 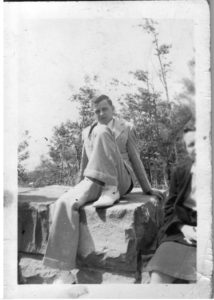 Finally, there is a photo included in the packet but not in the slips for the photos, loose like the four-leaf clover card. It is Jimmy Jewell. i’m pretty sure it was a year or two earlier. It may have just been put there when he was going through the box, not taken to war. i like to think it was included. It is a dapper man looking like he owned the world, his leg propped up on the rock wall where he sits. His wife’s image is cut off. The photo most likely was taken in the Smokies. The family, most Lebanon families thought the Smokies was the get-away place. Even though he has on a light wool suit and sports white dress shoes. He looks comfortable. i imagine him looking at that photo in his motor pool on Leyte thinking, “I’m going home and we are going to the Smokies, and I am going to relax.”

As i wrote this, i kept feeling i had published a great deal of the information before. But it just seemed like it needed to go here. It fit. It was Jimmy Jewell in the war with his special packet of photo memories in a special “four-leaf clover” packet.

i also thought i am not sure he  would like this. He could be sentimental when it came to his wife, his children, his family. i have seen that. But he was not sentimental about himself. He talked very little about himself. It was only when i was past middle age when he said anything about the war. Then, it was mostly sharing war stories. He never talked about how he felt. He, along with damn near every man who left his home, put on a uniform, and headed into the unknown war theaters, would say it was just something they had to do.

They did have to do it. And boy, did they carry through. i hope all of them had a packet with a four-leaf clover and photos to get them through the rough times of getting the job done.

2 thoughts on “Photos from a War”