Our recent trip to Scotland was magical.

Scotland was a wondrous place: beauty of the Northern Atlantic island, incredibly beautiful vistas, history, uniqueness, good eating, and wonderful people.The magic part was the six siblings and in-laws sharing each other.

And there was another kind of magic there. i have tried to capture it as it affected me with the below poem and a couple of photos (Note: i copied some of these photos from on-line images). 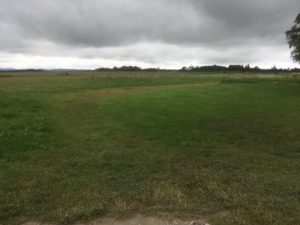 that’s what it was;
a moor
in the mist of a cloudy Scotland Highlands,
the stuff of Gothic novels,
windy, cold, rainy;
but not just any moor:
tragic it was then,
soul-stirring now
if one allows the moor to sink
into one’s soul:
the Highlanders call it Culloden now,
Blàr Chùil Lodair then,
still a reminder death is not fleeting.

the Scots and the Brits had at it, 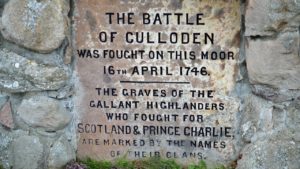 or rather, the Brits had at it
while the Scots took it from the Brits
hard, real hard;
today, the Scots have made it a memorial,
a graveyard:
it is impressive, as a graveyard.

the battle lines are noted on many maps,
explained in the many exhibits in the modern museum,
pointed out by the tour guides,
somber though they may be;
those lines of battle formed 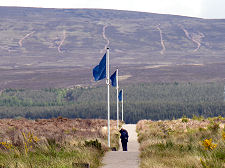 thirteen score and thirteen years ago
are marked on the moor by
red flags for the British,
blue flags for the bonnie Scots
who do not seem so bonnie
when one stands on the moor
where they stood back then
to create those staggering numbers
for souls gone so quickly,
so sobering it is hard to grasp 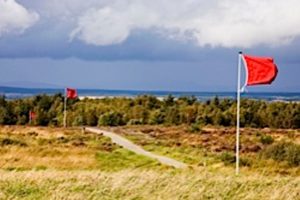 more than 1500 Scottish souls
dying in the mucky bog of the moor
in less than it takes to drive there
from Inverness today;

i walked the moor quietly
reading the plaques describing
battle lines,
stones noting the number of clansmen
underneath the sod
with mounds of mass graves nearby;
i stood quiet near the large monument 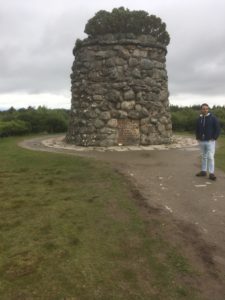 dedicated to the dead while tourists
took photos of each other standing there
not quite in reverence.

i recognized the names of friends
descended from the dead clansmen
underneath the centuries of soil,
coming upon one clan name
striking me more deeply than the others:
Fraser,
close friends in my formative years
who had a lot to do with that forming;
had we been back then
we could have been on the opposite
lines of battle, bloody carnage;
i paused,  breathed a bit deeper, 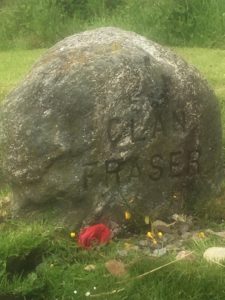 thinking of across the seas
where another country’s battle with itself
occurred about halfway between
Culloden and today;
thinking about what i thought later half a word away
observing people fleeing their native land,
risking death for them and their family
to escape fear, domination,
feeling, like at Culloden, but off the coast of Vung Tau,
a deep and penetrating sadness
from the realization
we have not overcome
intolerance, hatred, fear, carnage of each other.

i worshipped off Vung Tau, praying for a better world;
i worshipped at Culloden,
wondering if we can ever conquer ego, power, greed, hate;
i stood quietly by the marker of the clan with the name so familiar
while a tear running down my cheek was blown away by the cold wind:
there was an emptiness inside me.