A holy day. Regardless of your beliefs, you and i should reflect today, if only for a few moments between egg hunts.

i believe i’m not smart enough to really know about religious beliefs, which are true, which are right. i also believe there are some inherent things we all know are good, but we cast them aside for the more primitive ideas of self-protection, whether that be a group, family, or self-protection. i believe those who work to achieve the behavior we know inherently to be good will be rewarded and those who don’t will be tormented because they know inherently, deep inside, what is right and what is wrong. i believe this is an individual choice and how we deal with each other individually, not as a member of any particular group. i believe those inherent ideas of right and wrong have been most accurately ascribed to Jesus Christ in the New Testament of the Bible.

So in my way, i believe in Jesus Christ. i do not condone or condemn what others believe unless it hurts other people as a group, a family, or an individual. i am saddened when any religion (even if they claim they are “Christians) veers from the internal goodness, the teachings of Jesus Christ as i believe them, to spew hatred and fear of any other group, any family, any individual. i don’t think they are smart enough to know who is guilty and who is pure. i am absolutely, totally convinced they (or i) don’t “know” anything concerning belief.

i think that is what Jesus intended those many years ago. i hope my thinking is close to what is right.

Today is a day of a fulfilled promise according to the Christian religion. It is a day for me to somberly rejoice. Somber because our humanity chose to slay a man who believed in goodness. Somber because a political system put itself and its self-interest above justice for all, above freedom of men. Rejoicing because Jesus overcame such cruel insanity and rose from the dead, giving hope to all for peace and goodwill.

i reflected on that this morning when i went outside just past first light and heard the birds rejoicing. It is spring. It is time for renewal of hope. It is time to try again to work for peace and goodwill. It matters not what we believe, nor whether we accept the literal accounts of what happened this day two thousand and eighteen years ago.

Easter is a funny day. Non-practicing practicing Christians turn out in droves after not practicing for nearly all church services in the previous twelve months. Like that makes it all right. Funny. Most businesses normally open on Sundays remain open, unlike Christmas when the country shuts down. Business as usual for the fulfillment of a promise. Shut down for hope. Funny.

i will ignore the April Fool’s day part in this. i’ve never been real good at that sort of thing since we would “fool” Uncle Snooks Hall at dinner on April Fool’s Day with a sugar spoon with only a rim and the cup of the spoon being a hole. The three children would howl in delight when Uncle Snooks would look surprised when he tried to put sugar in his coffee. i’m over that now…except for the wonderful memory.

However, the other two events involved in this confluence are appropriate. You see, Joe Blythe Jewell, is the kind of practicing Christian i want to be. He believes. He doesn’t judge. He tells things they way they are. He loves. His ideas and mine are similar, but his beliefs are based on solid and never-ending

reading and contemplation. His knowledge is astounding, but he is not a “know-it-all.” He cares.

One of my greatest regrets is he and i chose opposite corners of this country to settle down (if what i have done can really be called settling down) — of course, this goes for my sister who is in yet another corner. i would like to spend time with both of them and their families on a much more frequent basis like our parents did with their families in Lebanon, Chattanooga, and even Florida.

Today, this Easter Sunday. Today, Joe Blythe Jewell turns 69. i write his full name because i searched for

“Joe Jewell” on the internet yesterday. One is an Phd in “aeronautics.” Now, Joe is smart enough to have been this guy, but i don’t think he is prone to work at the US Air Force Research Laboratory at Wright-Patterson AFB in Ohio.

Then, there is this Joe Jewell who is the lead guitarist of the Irish band Aslan. Although my Joe loves Ireland and visits frequently, i don’t think i’ll be watching him doing guitar riffs.

But maybe, just maybe. For you see, a third “Joe Jewell” is in San Diego.  The Joe Jewell Pscyhedelic Trio will perform at San Diego State April 13. We plan to be there

although we are pretty sure he’s not our Joe Jewell. Good guitar player though. i’ll think of our Joe a lot while i listen. You see, my Joe shared a room with me, upstairs for more than a dozen years. We got to know each other. He got the short end of that stick. i was into football, baseball, basketball, girls. That was about it. He was into everything and finding out about everything. Smart. Lots of common sense. Hard worker.  Oh, i could go on. Then i went to Vanderbilt. That story had been told. He went to Vanderbilt. Made it. He went to the Northeast, Boston specifically. Two masters. Wife, lifelong partner. Preacher, pastor really. Children. Grandchildren. And perhaps that is my Joe at his finest. Grandfather. 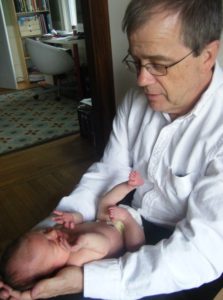 And that, appropriately, is where this birthday tribute ends. You see, i believe my 69-year old brother shows the beauty of him as this grandfather guy. Love, hope, caring. All in keeping with my beliefs of what Easter, today means, which just happens to be Joe’s birthday this year. A confluence of hope, resurrection, peace on earth, good will toward men.

Happy Easter with reflections of what it really means.

1 thought on “An Appropriate Confluence”