i posted this team portrait on Facebook Monday. It is of the 1957-58 Lebanon Junior High Girls Basketball team. i asked if anyone could name the players and i received several correct names. i was working on naming them all but was short on four of them. i pulled out the 1962 Lebanon High School annual. The annual was Jimmy Nokes, but he graciously sent me his copy when he read something about me not being able to remembers. Thanks, Jimmy.  i got  one or two more names.

Then, more responses from my Facebook post came in. Sarah (Sassy) Ward Jaeger blew me out of the water by naming all but two. Then Ken Clinard provided Brenda Callis’ input which made the list complete except for the mysterious number 25, second row, eight from the right. This is frustrating in that i think i should know her.

It was a fun exercise about a wonderful time in my life, long, long ago. They were beautiful women, inside and out, and Lebanon Junior High School is an experience not likely to be repeated for anyone.

Below is my annotated list of the LJHS 1957-58 Blue Devilettes, political correctness be damned: 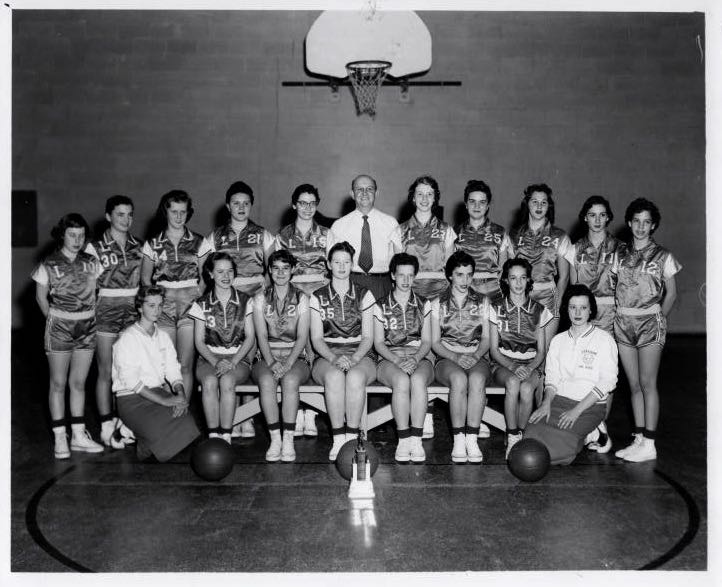 First row: Jennifer Brewington, manager ( she was the Football Homecoming Queen the previous autumn, and i have a photo of Jimmy Gamble and i as co-captains with her in the middle where Jimmy and i look like deer caught in the headlights); Elaine Davis (in the eighth grade, she wore my letter sweater and my ring around her neck); Pet Meadors (who could beat me in one-on-one); Mary Cardiff (at her home on Castle Heights Avenue, right behind my aunt’s home on Wildwood, Mary introduced a bunch of us to “spin the bottle” when we were in the sixth grade: i didn’t get to kiss any girl) Judy Baker; Sharry Baird (i dreamed about her one night in the fourth grade and fell in love with her the next day in Mrs. Major’s class on the second floor of McClain Elementary (1954, i think) and she remained my platonic love (although usually from long distance) for the rest of her life); Sarah (Sassy) Ward (she was my twin in eighth grade class play, “The Sunshine Twins,” at Lebanon Junior High, 1958). Second row: Suanne Smith, Catherine Jones (as mentioned in the Facebook responses, i rode her and sister Betty’s horse — i only remember falling off — on their farm on Coles Ferry Pike), Jean Ballinger, Yvonne LaFevor, Brenda Hankins (one of the most constant friends in my life),  Mister Mac ( a glorious man who did so much for so many and was a close friend of my mother), Marcia Emmert, the mystery young woman, Dorothy Bryan, Angela Wilson, and Bobby Jane Reed.

It was, without question, one of the best years of my life.