As expressed in previous writings, my favorite bridge watch was the morning watch.

i was overjoyed when i was senior enough to fall off of the in port watch bill. In the capacity of a duty officer, i remained on duty on board my ship for 24 hours, more or less (another sea story for later). My first ship had three section duty sections, then four, and then when deployed and in refresher training at Guantanamo Bay, two, or port and starboard as we called it — but in “GITMO” it was only after returning from our daily training at sea around 1800 (four bells) and on Saturday and Sunday. At one time after qualifying for Command Duty Officer (CDO), i actually had the duty for ten days in a row as all of the newly reporting department heads were working toward qualification. Duty in port was a chore. On the ten ships i served upon, we found a lot of humor (more sea stories for later) to make it bearable. But it was still ashore, not at sea.

Unlike duty in port, i bemoaned my fate when i became too senior to stand bridge watches. They were one of the real joys of being a surface warfare officer. And the morning watch was often the best.

For Navy folks and sailors of all kinds, that watch became the four-to-eight, or 0400-0800; for landlubbers, that watch would be 4:00 a.m. to 8:00 a.m. even though the original “morning watch” was the only correct term because of the actual time.

When i was in, and Lord knows everything Navy appears to have changed since i was in, on and off from 1962 until 1989, the Navy “morning watch” was my favorite. It began around 0315 when the bridge messenger of the watch found his way to after officers country, walked down the passageway (no, we didn’t have halls), found the last stateroom on the port side (there were many other staterooms where i was berthed, but i remember this one better than most), found the forward rack next to the centerline, and tentatively spoke, “Mr. Jewell  (until i made commander, then it was “Commander Jewell”), wake up; it’s time to relieve the watch,” making sure i was awake before hastily exiting officers country as quietly as he could.

i would scramble up, and to the dim red light from battle lanterns used in “darken ship,” put on the working khakis i had laid out when i hit the rack the previous evening , dash my face with water from the metal sink in the stateroom i shared with two other junior officers (JO’s), and stumble forward to the ladder leading up to the O3 level and the bridge. My olive green hook-necked issue flashlight with its plastic filter on the lens guided me with its red beam (good for preserving night vision).

i would pass by combat and quickly get the picture of our operational status and “contacts” (other ships) information before reporting to the bridge. There i would walk to the standing OOD, salute and announce per protocol, “I’m ready to relieve you, sir.” The off-going OOD would salute and give me his interpretation of what was going on. Satisfied — and unlike many OOD’s, i would not spend a lot of time on this, especially on the morning watch — i would salute again and announce, “I relieve you, sir.”

He would return my salute and respond, “I stand relieved” while already heading to his rack for a few precious hours of sleep before reveille. The Boatswain Mate of the Watch would announce, “Mr. Jewell has the deck and the conn.”

There i would be in charge of metal carrying about 300 souls, mostly wearing dungarees, blue chambray shirts, and white dixie cup hats in nearly 400 hundred feet of length, 40 feet of breadth (beam we called it), and 14 feet of draft at near 3500 tons with 60,000 horsepower to the four-boiler, twin steam turbines and more firepower than most Middle Ages cities to wield its firepower to…well, not much really at that time of day.

You see, the morning watch was nearly always a quiet watch. Flag officers don’t get up that early to order formation changes. So if formation steaming was the situation, we usually just sat in place (relatively) for about three hours. i would have relieved close to 0345: bridge watches usually relieved a quarter hour before eight bells. Because of the morning mess, the morning watch was relieved by the forenoon watch early, around 0700 or six bells. This was to allow the off-going watch to eat breakfast before morning quarters at 0745.

But there was more. After i successfully shook off the rack monster to stand by the centerline gyrocompass, i could contemplate the world. i could stretch mentally and then get ready for the coming day. My next watch would be the first dog (1600-1800) after the workday. But on the morning watch, the ship and the world at sea would begin stirring. Around two bells (0500), i would wander over and through the hatch to the starboard bridge wing. The Boatswainmate of the Watch would bring me some coffee. i would hang over the gunwale (“gunnel” is the correct pronunciation), sipping my coffee, usually jawing with my junior officer of the deck (JOOD). The quartermasters around the chart table just inside the pilot house would begin preparations to shoot morning stars with the XO, the appointed navigator on the small boys.

Once on the starboard bridge wing, i could smell the coffee brewing in the galley, which was located on the first deck on the starboard side. Then the smell of bacon and fried eggs, usually scrambled because if it was more than a week at sea, the eggs would be powdered eggs, not too tasty but still great aromas around three bells (0530). It was a great way to start the day.

Somewhere in there, usually shortly after reveille, the captain would emerge from his sea cabin and ask what was going on. i would catch him up as he sat in his raised bridge chair on the starboard side. He would then ask if there had been radio messages that had come in during the night requiring immediate response. Again, i would brief him. After enjoying the view for a while, he would alight from the chair and head to his stateroom a deck below his sea cabin, and then on to mess in the wardroom — on larger ships, nearly always when the commanding officer was, in fact, a captain (O6), he had his own mess, and the XO was president of the wardroom mess.

Shortly afterwards, the relieving watch team would arrive. The relieving process would be repeated, and i would head to the wardroom for chow.

The most negative aspect of all of this is i love to sleep and being aroused at 0315 was not, for me back then, a good night’s sleep. So long about 1000 or four bells, i would begin to fade. When 1130  (seven bells) signaled “knock off ship’s work” for the noon mess, i would head straight to my stateroom. The rack monster was calling and it was time for a “NORP,” a previously told sea story but the acronym stands for “Naval Officer Rest Period.”

i’m sure i have many misperceptions and faulty memories around my bridge watches. After all, the last one was thirty-five years ago. Also, i am a hopeless romantic and tend to recall all the good things and not many of the bad. This romantic idea was with me even when i was the senior Naval officer at the Texas A&M NROTC Unit. It was a particularly dark time of my life, and one night, i recalled a leg-pulling sea story about how to simulate standing a “mid-watch” on the bridge. i remembered how those watches were so solitary and let me escape to the wonder world of the sea in the depths of blue, sea and sky. So i thought i would try to replicate a mid-watch in my new home, fit for a single man.

i set the alarm and awoke to it at 2315. i had a cup of soup and a cheese sandwich in the kitchen. When finished, i dug out my khaki combination cover and put it on. i tied two bricks to each end of a short cord and hung them around my neck. Then, i moved in front of the picture window in the living room, peering out on the street. It didn’t work. i was still miserable and Snooks, my Old English Sheepdog, was utterly befuddled.

But i don’t think my romantic tendencies mess up my recollection of the morning watch, at least not too much. One example is the views i got to see. Watching the sea, especially in deep open ocean, go through the transition from darkest of night to first light to dawn to daylight is a beautiful experience no matter the weather. It can be howling seas with rolling, white crested waves and screaming winds with ocean water and spray crashing over the bow. It can be gloomiest of mornings with thousands of shades of gray. It can be a cloudless star-clustered sky receding to a recognition of light on the eastern horizon to the sun slowly claiming the day and the sea turning deep blue with flecks of white spume. But my favorite would be the morning watch when the old sailor’s weather prognostication was in full view: “Red sky at night, sailor’s delight; red sky at morning, sailors take warning.”

This morning when i walked out to get the newspaper on the driveway, it was one of those warning moments at first light. My photo doesn’t do it justice: 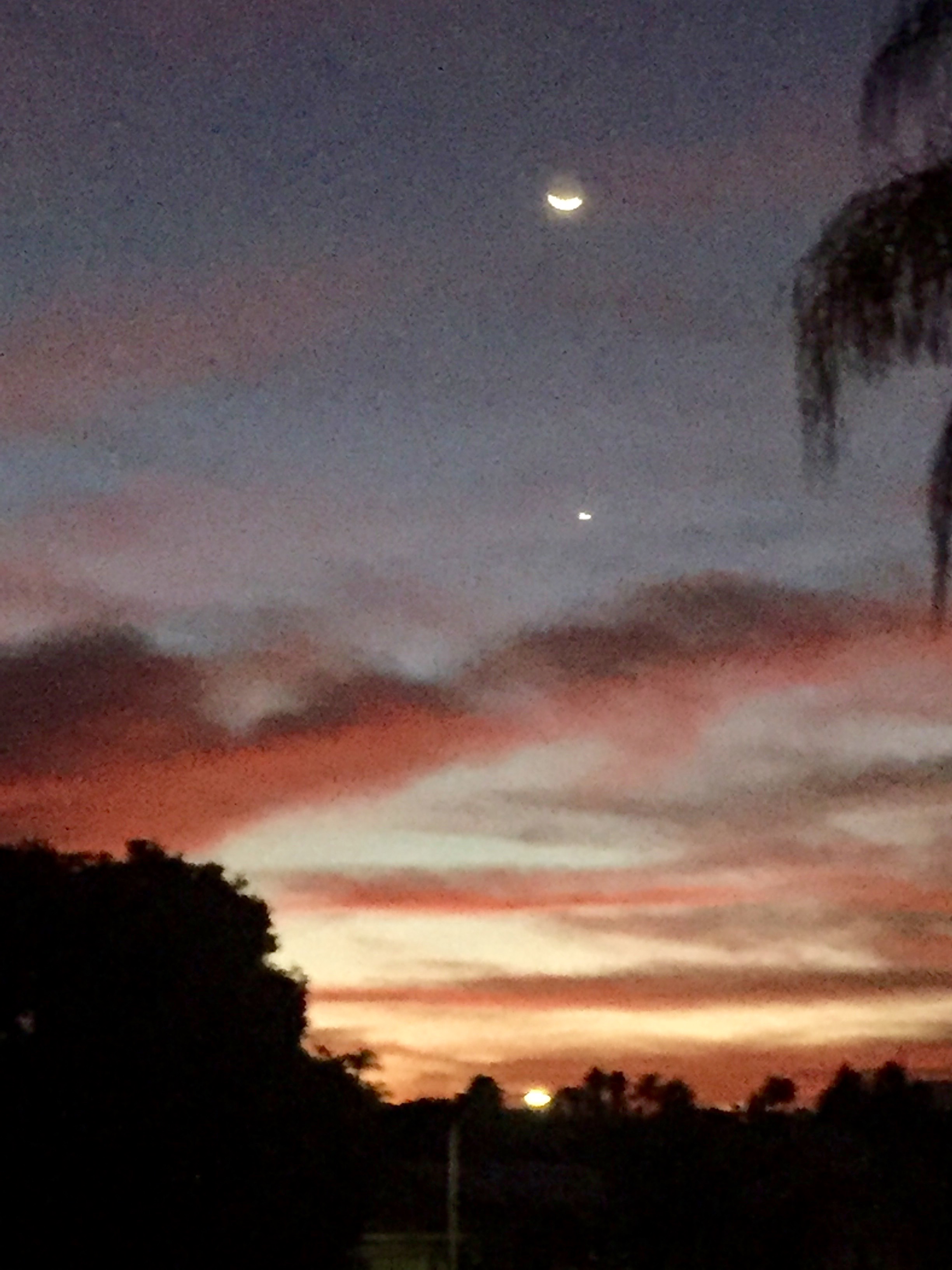 But i think it serves well enough (that’s a waning crescent moon with Venus below; the light at tree line is the just emerging sun). i wanted to go get my binoculars (i got some since A&M) and stand out there with them around my shoulder until it faded in coming daylight. But i figured the neighbors might talk.

Besides there was no ship deck below my feet. But for a moment, just a brief moment, i was back at sea on the bridge of an old steam destroyer, cutting through the sea. Alive, oh so alive.