About a month and a half ago, i began trilogy of posts about acquiring my love of the sea. 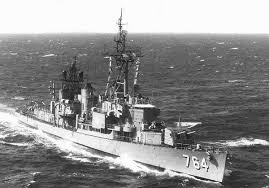 i posted the first two stories of my third class midshipman cruise aboard the USS Lloyd Thomas (DD  764).  Then i rested. Those first two posts centered around how i became insulated against sea sickness. Neither the chief petty officer faking blowing lunch with his mixture of crushed graham crackers and milk in a barf bag nor the tricks of the sailors in rough seas could induce seasickness. My resistance allowed me to never have a problem with seasickness again, not even through the roughest seas, for the rest of my time at sea. Those events gave me a one up on being a mariner.

My real love of the sea was precipitated later in that eight-week cruise. We had been to Sydney, Nova Scotia, Bermuda, and were headed back to Newport in late July somewhere in the middle Atlantic. i had spent my time in deck, operations, and was about three weeks into my five-week stint in engineering.

Engineering was on a four-section watch rotation and did not dog the 18-20 — the dog watches were 16-18 and 18-20, splitting the evening mess and allowing three section watches to rotate through different watches each day; a four section watch would rotate watches without splitting the dog watches into two. The midshipmen were in three sections. i began my engineering tour with the morning watch (0400-0800). Consequently, i stood the morning watch, then put in the 0800-1600 work day immediately followed by the 1600-2000 watches. For five weeks plus, i had a 16-hour workday.

Being young and having no sense at all, i went to the evening movie, shown for the enlisted in the DASH (Drone Anti-Submarine Helicopter) hanger aft on the 01 level. Every night. No sense. That gave me about five hours of sleep each day. No sense.

This particular night, the crew’s movie was “The Quiet Man.” i had never seen it, and was entertained and moved by the story. Perhaps that influenced what happened next. The thirty or forty crew members filed out of the hangar deck and headed to their berthing before taps. For a reason long forgotten, i delayed and trailed the exit. i was walking forward across the torpedo deck on the 01 level before heading down the ladder. i was alone. i stopped.

The night was a perfect summer night at sea. The ship was steaming with standard running lights allowing the stars to give off their full glory in the heavens. There was a full moon. It was almost perfectly abeam on the port side. i walked to the life lines and paused.

The Thomas was steaming at 15 knots on a windless night. The roar from the stacks passed over my head and was barely noticeable, but i could hear the swish of the bow waves passing down the port side. The reflection of the moon produced a path of sparkling white from the horizon directly to where i stood.

It likely was no more than a minute or two i stood there. It seemed then, and it seems now it could have been eternity. It was as if the goddess of the sea took her hand from the moon’s path and reached up and grabbed me. There was something deep in my gut, deep in my soul touched by that lady, the sea. She called me. i felt her then. i feel her now.

Oh, i tried to ignore her and the feelings down deep. i spent my obligatory three years after a chequered path to becoming an officer and got out with the intent of being a sports journalist. i only returned because of the financial responsibility of having a wife with a daughter on the way. The need for security. But the feeling from that night on the port side of the Lloyd Thomas never left me.

i spent almost 15 years on sea duty. There were many obligations for a Navy officer, what they eventually marketed as a “Surface Warfare Officer.” Those obligations often distracted from communication with the sea, but the sea never let go, never let go.

i have loved the sea in all of her moods: the calm of the doldrums, the lapping white caps of deep blue at first light, the heat of the water reflecting on a hot summer day in calm seas, the rage of a storm with waves breaking green water on the portholes of the bridge 75-feet from the waterline. And an infinite number of nights with the stars so plentiful, they seemed to run together and the full moon tracing its path to the port side of my ships. And grabbing me deep inside.

If i could go back to sea and drive ships, i would. But technology passing me by and age would not allow such a personal whim.

But the sea. Ahh, the sea goddess. i still love her.

2 thoughts on “The Beginning of a Love of the Sea, part III”