With this post, i  have added a new category. i am going to try, i emphasize try to work on putting my posts in the correct category.

“Willie Nod” will continue to be children’s poems and poetry, which i now intend to self-publish within the year. i hope to continue to add to this category as time passes. Although my grandson Sam has almost outgrown such children things, i have six grand nieces and nephews i hope will enjoy them.

“Jewell in the Rough” is the wonderful phrase for a category Walker Hicks created as the title for this website. i am considering making this category about golf, my thoughts and golf stories.

“Notes from the Southwest Corner” was initially used to rerun my weekly Lebanon Democrat columns before the paper’s website made my columns more accessible. i have plans to revisit them and post columns from that era, which i intend to collate and edit into a book, primarily for folks back home.

“Steel Decks and Glass Ceilings” is a category i am thinking about adding later as my work on the book of that title gets some purchase. My idea is to publish chapters here after i conclude the first draft. In case you missed it, this is my take on the USS Anchorage (AD 19) deployment in 1983, the first for a US Navy ship to spend extended out of port time with women as part of the crew and wardroom,

And of course, the “Pocket of Resistance” category is for all things jim jewell with his rather bent, contrarian point of view.

i plan to go through previous posts with sea stories and move them to this “Sea Stories” category. 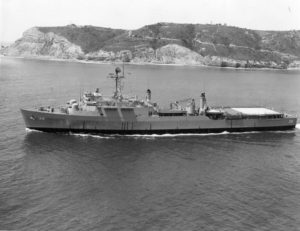 It was late summer 1975. The USS Anchorage (LSD 36) had just completed an unplanned month-long maintenance period in India Basin at the US Naval Base, Sasebo, Japan due to a stern gate mechanical failure. i had enjoyed Sasebo for that month almost as much as i enjoyed it when it was the re-supply port for the USNS Upshur (T-AP 198) and USNS Geiger (T-AP 197) when i was the executive officer of MSC, nee MSTS Transport Unit One, carrying ROK troops to Vietnam and back. We  spent roughly six days a month there throughout 1970.

But now, the Anchorage was underway again. It felt good.

My job as first lieutenant was the best job i ever had. Period. The first lieutenant on a landing ship dock is involved in almost everything. He is in charge of the deck department, which is responsible for most of the ship’s decks and spaces. The two ship boats, a motor whale boat doubling as the captain’s gig, and an LCVP, a small landing craft are also the first lieutenant’s. Add the two 60-ton cranes, the four 3-inch/50 caliber gun mounts (removed in 1980 after i was long gone) to the list as well as the well deck, the mezzanine deck, the magazines, and troops spaces for 600 marines. Any embarked craft such as LCM8’s and LCU, the embarked Beach Group  unit, and embarked UDT were under my responsibility, and i was in charge of all amphibious operations, including the well-deck loads, unloads, ballasting and deballasting and troop embarkation and debarkation. Oh yes, i was one of four Officers of the Deck (OOD) underway, the sea detail, and general quarters OOD, and because of previous Chief Engineer experience, filled in for ours when he was not available. Our CO, Art Wright, once declared the reason the operations officer billet was for a lieutenant commander is to ensure he was the senior watch officer so the first lieutenant wouldn’t have that job as well.

On numerous operations, i stayed on deck for 24 hours or more, the most being the 43 straight hours during the on-load of marine vehicles and equipment at Numazu before “Frequent Wind,” the evacuation of Vietnam off Vung Tau.

There were all sorts of weird assignments and loads. And you know what? i loved every minute of it.

But back to the story: the ship left Sasebo and headed north. i don’t remember why but as she closed on the Straits of Shimonoseki, between the islands of Kyushu and Honshu, i was relieving the OOD to stand the mid (0000-0400) watch, the operations officer, the OOD i was relieving who was damn near catatonic.

“She’s got all her lights on. All of them,” he almost screamed.

We were standing on the port bridge wing, and the lieutenant commander (who shall remain nameless here) was frantically pointing aft.

“She could hit us, she could hit us!” he declared in a higher pitched tone than normal, “Should i call the captain? What do you think?”

i took a bearing on the ship, a very large cruise or party ship, from the gyro compass repeater on the bridge wing.

“Mr. Jewell has the deck,” the boatswainmate of the watch announced.

i called the captain, told him i had the watch, that there was a ship aft not observing the Rules of the Road and looked like a party ship with all of the lights shining. i stated we were the “privileged vessel” and she was “burdened.” i explained this meant i should maintain course and speed and anticipated she would pass on the port side fairly close. i told him i would call him again after i took another bearing but combat (CIC) had already reported a slight right bearing drift with a CPA (closest point of approach) within 1000 yards. i asked him if he would like to come to the bridge.

“Ordinarily, I would come up,” Commander Wright replied, “I was getting dressed to come up as John Doe (the anonymous operations officer) called me three times and seemed distressed.” He continued, “I won’t come up now unless you need me or the situation changes. I trust you.”

“Aye, sir,” i replied dutifully and headed back to the port wing gyro compass. i took another bearing.

The bearing had increased about a half degree. i remembered one close call in the Mediterranean on the USS Stephen B. Luce (DLG 7) when a “burdened” freighter crossed our bow (Luce was “privileged) within about fifty yards. That’s when CDR Richard Butts, the CO whom i had called to the bridge, said, “See, you are not going to collide if you have bearing drift.” He and i had taken bearings alternately for the past two miles of closing with the freighter and we saw  less than half a degree of bearing drift at about 100 yards (obviously, it increased rapidly as she moved closer and passed just ahead of our bow. . He was correct, but man, was it too close for me.

i explained this to the off-going OOD who i discovered was standing behind me.

We stood on the port wing together and watched the party ship as she passed just over 500 yards from our port side (500 yards at sea is close, very close, and usually dangerous, but not as dangerous in a passing situation). John Doe, obviously relieved in two ways went below.

i could hear the Japanese music and the shouts and laughters of those embarked. They were having a good time and the ship was doing about ten knots faster than we were. i continued to watch as she moved past our bow and slowly begin to pull ahead of us. About an hour later, she disappeared over the horizon.

My point is near collisions at sea happen. They all could and should be avoided. That lieutenant commander, although senior to me and better schooled in many ways, had not spent the time at sea i had. Nearly all of my training for driving steam ships at sea was from, guess what, driving ships at sea under experienced senior officers, especially the very best CO’s: Art Wright, Richard Butts, and Max Lasell at the time. i also learned what not to do from one or two bad CO’s, obviously not to be mentioned here. I did not have very much school house training for driving ships.

Ashore training is good, very good and should be with all of the technical tools we have now. But nothing, nothing can replace being at sea and OJT learning from capable and responsible seniors. All of this posturing about too much time at sea and not enough time spent with the family is hooey. When i joined the Navy in the 1960’s, there was the saying, “If the Navy had wanted you to have a wife, we would have issued you one with your seabag. If you are a mariner, you love being at sea. You and your spouse should work that out. Hard? Yes, it’s difficult, but a Surface Warfare Officer’s duty is to be at sea.

And not sweat the small stuff…just the close calls.

1 thought on “A Near Collision…Not”