This was one of my very first columns for The Lebanon Democrat. It is special to me because the man i wrote about here is very special to me. i wrote it right after the bad San Diego wildfires in 2007. Dave remains a wonderful, actually amazing man, and i am proud to call him my friend. For some reason last night while watching the woeful San Diego Padres lose again, something Dave said to me popped into my brain. Something Dave said during our time together or wrote in his book keeps popping into my head. That’s a good thing. If i remember correctly, this pop up was how his North Vietnam interrogators kept wanting to know where they kept all the cows, pigs, and chickens to feed the crew on an aircraft carrier. Regardless, i wanted you, in case you missed it before, learn a little bit about an American hero. If you want to learn more about his story, his book, The Ways We Choose: Lessons For Life From a POW’s Experience is available on Amazon, Barnes and Noble, and i believe you can still get one from his website, www.DaveCarey.com. If all else fails, contact me. We will get you one if you want it. 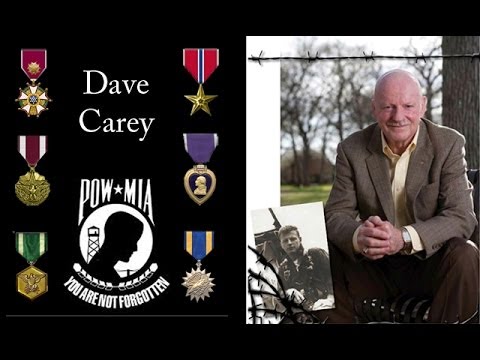 SAN DIEGO, CALIFORNIA – This past Monday, I left the cleanup from the San Diego fires and flew to Lake Tahoe, Nevada. It was not an escape. It was work. I was co-facilitating a team building workshop for a California police department with my friend, Dave Carey.

Dave is not your ordinary business associate. On August 31, 1967, Dave Carey’s A-4 was shot out from under him over North Vietnam. He spent five and a half years as a Prisoner of War (POW), most of the time in the infamous “Hanoi Hilton.”

Dave and I met in 1985 at the Naval Amphibious School in Coronado. We worked together for just shy of a year as I transitioned into Dave’s position as the head of leadership training for the West Coast and Pacific Rim. Together, we help create a two-day workshop on leadership excellence for senior Navy officers.

Dave retired. Four years later in 1989, I followed suit. After my initial dive into my new job as Mister Mom, I soon started to look for ways to generate income in the quiet hours.

After some discussion, Dave and I agreed I would write a book about his POW experience, or more accurately, about his motivational speeches concerning his experience. After completing the draft, we decided it really should be written in first person. The original draft is on my office bookshelf.

Eight years later, Dave holed up for three weeks and completed The Ways We Choose: Lessons For Life From a POW’s Experience.

Part of my approach to writing was generated from conversations with Dave. He and I were driving to another workshop about fifteen years ago when I asked him about what outcome did he expect the audience to have when he gave a speech.

Dave said he had expectations initially, but discovered his listeners made their own connections. Early on, Dave had completed a luncheon speech when a huge Texan came up to him, put his big arm around Dave’s shoulder and drawled, “Can I talk with you, Dave? I understood every word you said today. The fact of the matter is, in this life, we are all going to get shot down, and some of us more than once.”

I don’t know about you, but I’ve managed to get shot down several times. Dave’s book and his ideas have been significant guides to me as I have wandered through living. The book not only applies to San Diego, Lake Tahoe, and Middle Tennessee; it worked in the Hanoi over 40 years ago.

Dave’s book revolves around a question he is most frequently asked, which is, “How did you do that? How did you and the other POW’s get through that?” He maintains they did that in a similar way to how we get through our daily process of life and work.

Dave’s assessment of how he and his fellow POW’s made it through boils down to five factors:

His anecdotes relating to those factors are humorous, inspiring, and thought provoking. I have had the wonderful opportunity to discuss these things in depth with Dave.

So I check myself against his factors almost daily. They have even become part of the value statements for my consulting group.

I will not ruin the book by parroting it here. However, I am particularly fond of Dave’s pointing out how the POW’s trusted each one of them would do the best they could, would resist the severe interrogations to their limit; recognizing each of them had their own limit levels.

I now try to consider folks I work with are doing the best they can do. This puts a whole different shape to the way I work with these people. Fewer rocks are thrown; fewer lines are drawn in the sand; fewer chips are put on shoulders.

I would encourage everyone to read’s Dave’s book. Your connections should be yours, not mine, not Dave’s. I know folks in Middle Tennessee also get shot down every once in a while.

i should note here that bit about my consulting group is no longer extant. i write. i used to drive ships. i gave up consulting when i got tired of trying to make people do the right thing. i still follow Dave’s advice.

2 thoughts on “Lessons from a POW”