My good friend Jimmy Nokes in a recent email to the 1962 graduates of Lebanon High School noted the passing of a code talker:

Samuel Tom Holiday a member of WWll Code Talkers recently passes away shortly after his 94th birthday.  He was a Marine who served in the South Pacific and helped in  many battles. He was one of less than 10 who still survive.  He will be buried in The Navajo Nation next to his wife.
This group of Americans should always be remembered for their dedication and service to “their country”.
Just wanted to pass this on.
In 2008, one of my earlier “Notes from the Southwest Corner” weekly columns for the Lebanon Democrat discussed my meeting a code talker. i think the column pretty well covers it. It certainly was one of the most delightful and interesting evenings i’ve had in my life. the drawing leans against the wall behind my desk.

SAN DIEGO – The Navy sent me many places I would have never seen otherwise. I have always been grateful. “Join the Navy and see the world” was not an empty slogan.

One of the most unlikely places I visited was the New Mexico and Arizona desert, a long way from San Diego, Middle Tennessee, and the ocean.

My thoughts turned to this abnormality when I read an article in The San Diego Union-Tribune this past week. Members of the Kumeyaay tribe in San Diego County are attempting to save their native language from extinction.

My travels to the Navajo Nation also had a connection to Native American language. The Navajo language did not need to be saved. To the contrary, their language contributed to the United States winning World War II in the Pacific.

In the spring of 1989, my command, the Naval Amphibious School in Coronado, asked me to chaperone a trip through New Mexico, Arizona, Utah, and Nevada. The tour group consisted of approximately 25 foreign senior officers who were attending an amphibious planning course. The public relations tour was a ten-day whirlwind trip through the Navajo reservation of Four Corners, the Navajo reservation; the Grand Canyon; Brian Head, Utah; and Las Vegas. The farewell dinner to the Navajos in Window Rock, AZ, the capital of the Navajo nation, was by far my best time on the tour.

The Navajo Veterans of Foreign Wars sponsored the dinner. The speaker was the embattled Navajo council vice-president, Peter McDonald, who was eventually forced out of office and sent to prison for fraud and corruption. My special time was not the dinner or the speaker.

Being a chaperone, I waited until the foreign officers and the VFW members had found seats. When the organizers discovered no seats were left for me. they set up a card table and said someone would join me. Soon, the picture of noble warrior came to my table, accompanied by a young lady. He introduced himself as Carl Gorman.

As the meal was being served, this craggy faced man, long white hair pulled back and tied in a pony tail, made me feel comfortable. He spoke with when pride introducing his daughter, Zonnie Gorman, who was working for Amtrak.

Gorman, a member of the Black Sheep clan of Navajos, was an original Code Talker in World War II. This group of 29 Navajo Marine recruits created the code for radio communications in the Pacific theater from their native tongue. The language was not written and the Japanese could never break the code.

The Code Talkers grew to around 400 and their contributions were kept secret until the Vietnam War. They were finally honored through a congressional act in 2000 and all received the Gold Medal authorized by that act.

Gorman was not just a Code Talker. He also was an artist known for his depictions of life in Four Corners and a protector of Navajo history, lore, and culture. His son, R.C. Gorman, is an artist of equal stature in Southwestern art.

Carl Gorman projected a regal bearing. He talked energetically of his heritage and the Code Talkers. His anger at the white man’s prejudice against his people and himself was fervent without malice.

As we talked, he took his pen and began drawing on a scrap of notebook paper.

I wondered why he was not at the head table. Gorman spoke of how the VFW had refused to take a stand against questionable practices. I discovered later he had left the organization because of his ethical stance. Yet he was still held in the highest regard by the other VFW members.

He passionately railed against alcoholism, which had become a severe problem on the reservation. He pointed to the VFW members, many of whom were drinking heavily.

The evening was one of the most educational of my life. I left awed by Carl Gorman, or Kin-yah-onny beyeh, the Son of Towering House People.

The drawing on the scrap paper was completed at the end of the dinner. It depicted Navajo warriors on horseback. It was simple but haunting. He gave it to me.

I hope the Kumayaay can successfully reclaim their native tongue. It is rooted in Yuman, the root of dialects of Native Americans from this Southwest corner to Arizona.

Mr. Gorman would be proud of their efforts. 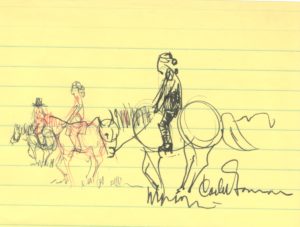 i thought i had written of my meeting Mr. Gorman and included a scan of his drawing. i gave my copy of Gorman’s book to someone who never returned it. i need to get another copy. It was intriguing. The Code Talkers gave an incredible service beyond the call of duty to our country even as they were being mistreated in the worst possible way. Carl Gorman was above that, and i suspect all the Code Talkers were of that ilk. The passing of Mr. Holliday is another marker of the great generation of all the Americans regardless of race, creed, or color remains a bright spot in our history. It is sad to see them go. i am not optimistic we will have another generation like that one again.

1 thought on “An Evening with a Code Talker”