This was begun yesterday just after noon. It was interrupted when the tenting and fumigation team arrived. It went downhill from there.

No, no: we are not going camping. i was never big on that, and my wife, after backpacking through Europe for three summers after high school has sworn she will never travel where she will have to spend a night without a ceramic toilet.

i’m betting close to or after the later time.

i will have participated or been subject to this process three times by the time this is over sometime this weekend. i don’t hate many things, but i hated the first two times of this process. i hate this one even more.

i don’t remember anywhere but here in the Southwest corner seeing this. Perhaps that is because this process was not available when i was growing up in Lebanon, and in the other 19 places i have lived, i was probably not there long enough to see it happen.

The process is called, technically “fumigation.” We call it “tenting.” It doesn’t have a thing to do with camping out. And “tenting” definitely is not referring to a good time.

It seems innocent enough. These guys pull up in their trucks. We leave. They put a circus looking tent over the house, seal it from outside air, then pump this god-awful gas crap inside to kill everything, termites and all, and i mean everything.

First, there is the prep work and consultation. This takes about three months with an uncountable number of  phone calls, almost as many meetings, and oh, about ten years out of your life. This does not count the local treatment sessions you have been enduring about a half-dozen times a year for the past three or four years (hoping you can avoid “tenting”). You have to clear the sides of the house of any plants by eighteen inches. Then, you have to take indoor plants, pets, and humans (unless it is someone you really don’t like) someplace else for at least four days. Next, any foodstuffs or other liquids and about twenty thousand other specified objects must be removed and stored somewhere other than inside the house. If you leave any foodstuffs in the house, you must double bag and seal them. Now i have learned this list of things to remove grows exponentially when women, i.e. my wife and daughter, make the list because they are super cautious, which i guess, is a good thing but a pain in the…oh, i almost forgot myself there. And then you leave, worried about what the tenters are going to kill in spite of your best efforts, how many of the Spanish roof tiles they are going to break, hoping beyond hope you haven’t left anything inside that should not be there, and worrying about thieves breaking in and stealing what you did leave inside (this has become a new but fairly common occurrence in the Southwest corner: damned low life).

Oh yeh, then you have to find some place to stay for two nights. Sarah and her dog are staying with one of her friends. Our cats are being boarded by our vet. We are staying with our friends whom we will never be able to thank enough for taking care of us on many occasions: Pete and Nancy Toennies. There were a few moments after i foolishly offered to sleep in the front yard to ensure those criminals did not invade the house i actually thought Maureen might see as reasonable.

Friday, the tent comes off, and we can tentatively, cautiously reenter. But oh, oh, it’s not done yet. We must retrieve the pets. Then, we must start moving all that stuff back to our house. This time we elected to take up the offer of our neighbor’s across the street, Spud and Vonda Mumby, who graciously offered us space in their garage, including things for inside the refrigerator out there. i figure moving all of that stuff back and putting it in its proper place, perhaps a new more desired location will take about a year. And of course, we need to move back all of the things we moved at least eighteen inches away from the house. Whew.

But, now you have to assess damages. The roof tile guys are standing by. i’m guessing this whole thing will be behind us by Christmas.

Termites. i hate them. Three times they have required us to tent. i hate them more each time. i also hate them as i take routine inspections of the house and garage looking for their droppings from eating away my house. Gross. Always a threat. i hate termites. i do not know what useful function they serve in this environmental system. Hate ’em.

So, i’m sitting here waiting for the tenters to show up, wondering if they prefer to be called tenters or fumigators. They have another half-hour to be inside their window. Since i am starving, i’m guessing they won’t make it until later, about supper time.

i have started a poem here below. i may finish it before they get here.

the evil hoards wait in the canyons
hiding, building up their strength
to swarm upwards, penetrating our peace,
our home…

Well. the boys got here. Big open bay truck with rolls and rolls of tenting material. Hidalgo, whose name means of noble birth, which i might have named a son had i known the translation and had a son, and a great movie about a horse of that name, takes a tour around the house with us in tow. He is extremely complimentary of all of our preps. We reach the end of our tour where a fence extends from our house to the end of our property and then right angles back to a concrete block pillar and beyond.

“Hollow,” Hidalgo nods knowingly as he smacks it with the bottom of his fist, “Hollow,” he repeats. Then he explains “Ag” requires there not be an escape for something as i imagined a gazillion termites swarming out of the house through this five foot tall five-inch wide stucco fence. Maureen knew better and later explained escaping gas was the concern, and i finally understood because this stuff would have won World War I had the other side had it in their possession (and wiped out possibly millions of the good guys). “Ag” i believe stands for Agriculture and is a government agency of some power from some branch of the local, state, federal governments or possibly the United Nations in the termite business. They send out an inspector to ensure tenting meets their requirements before the killer gas is allowed to be pumped in our house.

Maureen objects, noting we’ve gone through this ordeal twice before and they simply taped the tenting around the fence to ensure it didn’t escape. Well apparently, some good ole well-intentioned Ag decided this procedure was flawed.

Having worked with government agencies before and therefore knowing there was no way in hell the Ag’s would ever waiver from this requirement, i fearfully asked Hidalgo what could we do.

His answer: cut a gap in the fence near the house where they could take the tent to the ground. By this time, it was about 2:45. i am thinking i could do it with my chain saw, but being realistic for a change, i realize this would take me about two days, and i really didn’t want this to last any longer than scheduled. After all, i hate termites.

i again asked Hidalgo what we could do, and he told me, they had to tent back to something solid, like the concrete block pillar. i become optimistic, and show Hidalgo how this might be done. But he pointed out the fence keeps going straight on my neighbor’s property and that would be an escape route for the gas. i counter. The gate is hinged on a four-inch steel piece that runs from the top to the bottom of the fence. Hidalgo concurs but then points to the small bushes and trees hugging the fence on the neighbor’s side of the fence.

“Hey, no problem,” i say, “i can cut them down and clear eighteen inches,” noting, “i’m sure Regina would be okay with that.”

Hidalgo, “We have to have her permission.”

Hidalgo: “We have to have her permission.”

Somewhere in this exchange because Hidalgo’s English is not real good, Willie of the team joined the three of us and there has been a running phone conversation with their supervisor.

me: “Well, i can call her and she will tell you it’s okay.” Then i yell for Maureen to call Vonda to get Regina’s phone number because we lost her number. Maureen efficiently goes about her business and is calling Vonda.

While all of this is going on, one of the five tenters is standing in our front yard and a very large bumble bee takes a liking to him and begins dive bombing his head. So in the middle of this discussion, this guy is running all over the neighborhood, swinging his long-sleeved shirt around him in a fruitless effort to ward off the bee while the other tenters are laughing hysterically at the comic scene.

Willie: “It has to be written approval.”

me: “Isn’t there some way we can get around that? Can i talk to your boss or call the Ag guys and talk some sense into them?”

i knew he was right but wanted to try. “You know, i’m pretty good at that kind of thing.”

Maureen then informs us she has talked to neighbor Regina who is on the way home. The bee attack continues with accompanying raucous laughter. i ask the two tenters if i wrote up an approval for Regina to sign, would that be good enough. Willie informs me that it takes a certain form. The tenters, of course, don’t have a blank form in the truck. The boss has it at the office.

We discuss how long it would take for me to get some one more capable (and younger) than me to create the gap. Hidalgo informs me if we could effect the cut or have Regina’s written approval and clear the plants by the next morning, they could tent then and we could return to our home sometime Saturday.

i am resigned, sadly.

Willie: “They are sending out someone to cut the gap and we will restore the fence after the tenting.”

i am as close to being the happiest man in the world who has ever gone through the tenting process, which really is not all that happy.

Hidalgo: “We can start tenting now and finish when the gap is cut tonight. So  we will call you around noon Friday to let you know it’s okay to come back.”

i thought we were through. But then Regina pulls into her driveway anxious to help us and sign the non-existing approval form. The explanations including the whys follow.

At last the ordeal is over…almost.

We had Nancy’s wonderful spaghetti dinner last night. Pete and i played golf early this morning. We will have supper tonight at a new Coronado restaurant. After golf, i drove home to check out the tenting. They did a good job. i think. It does look like we are having a circus inside. 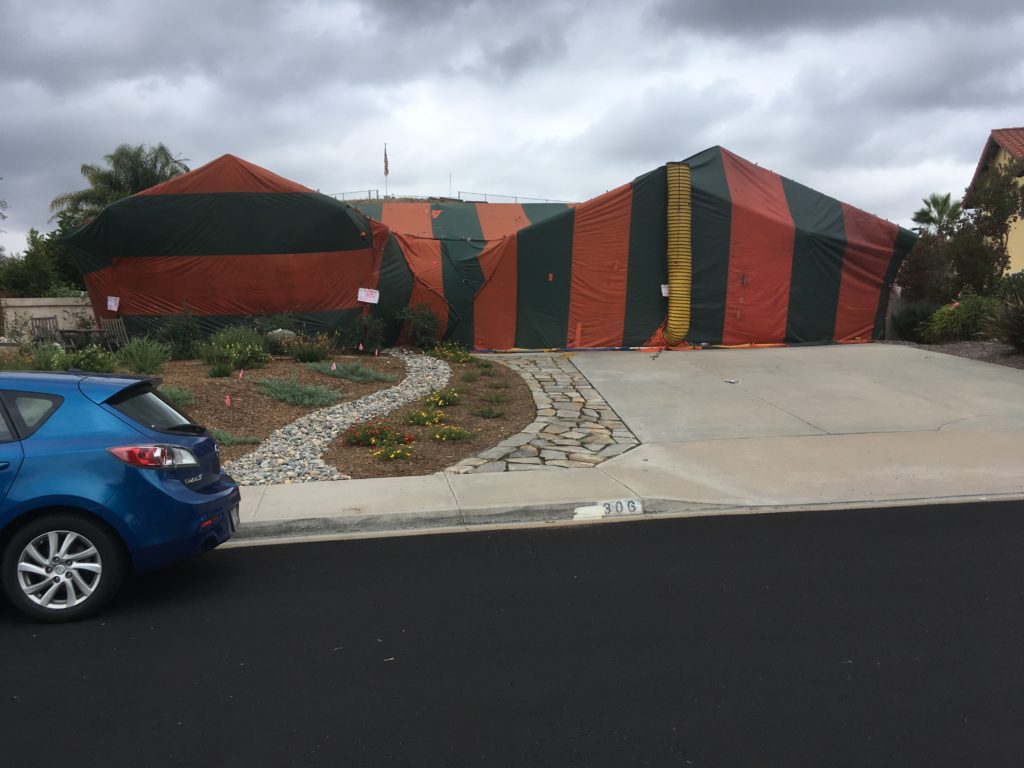 So it is working out well…until we start the moving back in process tomorrow.

To hell with the poem. i hate termites, even dead ones.