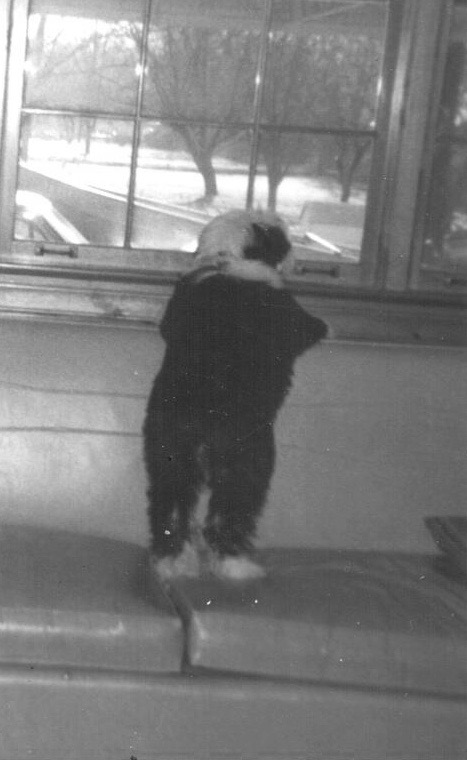 Lady Snooks of Joy, aka Snooks, 127 Castle Heights Avenue, 1971. We were visiting my parents for the first time with Snooks, named after my wonderful uncle Snooks Hall. She was a wedding present we gave to each other. My wife trained her. i enjoyed her. When everything finally fell apart, i ended up with Snooks, or Snookers as i often called her. My wife on her way to divorce me couldn’t bear of thinking Snooks and i should be separated.

Snooks was mine. First dog, really.

My sister won the golden cocker spaniel we appropriately named Lucky in a Halloween drawing in the school festival in Mrs. Vasti Prichard’s fourth grade class. Puppy Lucky lived in the den and the basement at night — our parents grew up in a farm world where animals were for helping with work or providing something to sell like eggs, milk, beef, or chicken breasts, not as house pets — through the winter only to escape one spring afternoon and run into the street and into a car. Just over six months.

Then, we had Trixie, an obnoxious little ankle biter the three children loved but who disappeared mysteriously after about a year.

Finally, Martha brought home Cotton, a bundle of male energy and close to a Eskimo Spitz, but there was something else in there too. He was allowed in the den but stayed outside at night unless brutal cold caused my father to let him in for the night. Cotton became the family dog. Cotton also, long before we even knew what lease laws were, ruled the world, wandered afar, and had a good and healthy life. Even the averse parents became fond of him, and he really ended up being our father’s dog.

But Snooks was mine. My ex-to-be understood that.

She, Snooks that is, presented a problem. She was my solace and no real problem at Texas A&M while i was the senior Naval officer at the NROTC Unit. One of our secretaries lived on a farm with her husband. She would keep Snooks when i went on summer duty to Little Creek, Virginia. But i was in the Navy. Navy officers, especially those that shunned the idea of heroically flying, sinking below the surface, or doing superhuman things like SEALS, to go to sea. i went back to sea.

So the secretary agreed to keep Snooks when i left to join the amphibious staff in Hobart, Tasmania and remain in the western Pacific for five months. On the way back, i was trying to figure out how to make having Snooks with me work in San Diego. I wanted her badly, but it was a sticky wicket: finding an apartment that would allow big pets, finding a keeper when i went to sea, giving her exercise, what to do with long work days. Problems. But i was working on it until i got the letter in the mail call when we reached Pearl Harbor on the way home.

The secretary sent the letter. It told how her husband was taking Snooks and another of their dogs to the vet in the back of their pickup. How Snooks leaped out of the truck bed while the truck was going pretty fast. She died instantly.

When i read the letter in my stateroom, i cried for about an hour. She was a lovely dog.  My dog: slept with me in the bed on the porch of that farmhouse north of Paris, Texas when we came back from Korea; jumped into Spring Creek while i was water skiing because she wanted to me with me. Worst fault: she didn’t like Blythe getting close to her food dish. She was my dog. i cried some more.

Lady Snooks of Joy. We named her that because she was AKC registered and her mom was a champion with Joy in her name. Fitting.

And, i now think when looking at this photo, she really didn’t want to know what was out that window. i’m not sure i did either.