The fog greeted us this morning, early this morning for Maureen, not so much early for me.

The fog reminded me of Newport. Rhode Island, that is, not up the road in California. i would not give up the Southwest corner climate unless i was forced to or for financial reasons, but i often think about the raw, beautiful, wind swept fog on the rocky shores of New England. i remember sitting on the rocks as the angry Atlantic crashed against those rocks below. Hite McClean,  a Greenwood, Mississippi boy who had done well, graduated from Vanderbilt, got his law degree from Ole Miss (i think i remember), and who was slightly goofy enough to run with me, especially down to Mac’s Clam Shack by the small shipyard off of Thames. i’m thinking maybe Waites Wharf, but it was a long time ago when Hite and i would plan ahead for eating quahogs because the grit from the sandblasting might end up in our quahog or beer and even if it didn’t, you could blow lunch for most of the next day, but man, were they good and and the setting was perfect so it is probably gone now, and the next day, blowing lunch or not, Hite and i would go sit on the rocks and watch the sea crash against the rocks in the fog.

This morning, the fog driving north reminded me of that…

But that is another story.

The folks we were going to meet are a special part of our family. They live up east of San Francisco, except one couple who live in the city. They all are just incredible folks.

Ann Minoulti is the ringleader. She is also the mother, grandmother, and great-grandmother to all of them. She is a kick. She also takes care of them, loves them like mothers, grandmothers, and great grandmothers should love their offspring. Unconditional. No excuses. Gathers them about her and laughs with joy. i’ve seen it.

Nikki and Mark are the two who live in the city with their son, Marky. Nikki is one of the most beautiful young women i have ever met. From what i’ve seen, she is just right  for Mark who proposed to her in Disneyland yesterday. They are also both very smart and fun. Marky has good genes.

Stefanie and Eric are quite frankly in my opinion beautiful. Her son Stefan is in high school making great grades and on his way to success. You can tell. He and Eric are father and son even if it doesn’t say that on the official records.

Then there is Naomi. Naomi is eight. She had some difficulties in that thing called birth and has some special needs. But you wouldn’t know it. Stefanie has written a book, I See You, LIttle Naomi. It is a children’s book to make children understand special needs children in their midst and how to relate. Great idea. It works. Great book. Naomi, the title character is great also. It is a wonderful thing to see Eric and Stefanie loving her just right.

Finally, there were Sebastiano and Sienna. They are the children of Danielle, another daughter of Ann, who could not join them on this trip. Danielle is a winner and proving it. Sebstiano and Sienna are fun, well-grounded, and good to be around.

It all made me feel good because these folks, my family have faced life and its hardships and not only survived but succeeded through love and strength. They are very special to me.

In our breakfast conversation, Stefanie discovered she missed my Democrat column about her mother-in-law, a special person in her own right who i am honored to call family and my friend: Leonore Johnson. So i have included that column below the breakfast photo.

It was about three hours of driving in Los Angeles and I-5 traffic in the fog. And our short time together was worth every mile.

The column with its photo:

Notes from the Southwest Corner: Leonore Johnson, one of my heroes

SAN DIEGO – Sometimes I think I whine about not being back home too much.

I miss Lebanon and frequently wonder what life would have been like if I stayed. In most scenarios, staying home comes out ahead in my mind.

But I ended up with a beautiful woman where the weather, in my opinion, is the best in the world, where I can climb my hill and see the ocean as well as Navy ships in the bay, and where I can play bad golf twelve months out of the year. Also, if I hadn’t stumbled into this vagabond life, there’s a bunch of great things I would have missed.

And once in a long while, I have run into someone immediately recognizable as special, someone with whom I immediately found rapport, someone who immediately gained my respect, someone I began to think of as a hero.

Race, culture, religion, background may not match, but I knew this was certainly a special person.

I have run into a handful of such special people. I have spent significant time with all of them except one.

I met Leonore Johnson once for about an hour, if that. Fortunately, in this age of “the cloud,” and “Facebook,” I feel as if I have known Leonore for a long time. She is one of those special folks I have come to see as a hero.

I would have never met Leonore if I had stayed home, although we might have met much earlier if the Navy had operated differently in 1968.

Leonore was born in southern Alabama. Her family moved to Killeen, Tex. when she was in her pre-teens. After high school, she met Leo Johnson at Prairie View A&M where they married. Both signed up to be Navy officers. Had the Navy sent them immediately after graduation to Officer Candidate School in Newport, R.I., we might have run into each other. I went to OCS in 1968. The twosome’s arrival in Newport was delayed until 1970.

While in OCS, Leonore became pregnant. The Navy, intolerant about such things back then, sent them back to Texas with honorable discharges. As Leonore says, “the Navy’s loss.” Leo became an agricultural engineer for the USDA Soil Conservation Service from which he retired in 1999. The couple moved frequently due to USDA assignments until they settled in Brownwood, Tex. where they have lived for 42 years.

Leonore returned to college and earned her teacher’s certificate and was a teacher for 35 years and then she retired in 2007). They have two sons, Eric and Michael; daughter Jerilyn; and two grandchildren.

I met Leonore through their oldest child Eric. Eric is married to Maureen’s and my niece, Stefanie Lynn Johnson. These two live in Concord, Cal. with their 15-year old son, Stefan; and 6-year old Naomi, who is a beautiful and intelligent child with special needs.

While we were on one of many trips to the Bay area four years ago, we were visiting with Eric and Stefanie when Leonore came by in the afternoon. Our meeting only lasted minutes but it has led into a lifetime friendship.

We have solidified that friendship through Facebook. Leonore is an avid and frequent contributor. We “friended” each other (“befriended” if you are old school) through Eric’s page. She puts up many posts, which I find interesting.

I am amazed she has the time. In addition to multiple daily posts, she sews, does woodcraft, cooks, makes artistic hair bows, and is a prodigious reader. But her real, continual job is being the caregiver for her 89-year old aunt.

Her posts, which initially drew me to her, were almost daily poems of the season by famous writers. The poems allow me to contemplate the bright side in my harried times. Leonore also provides interesting tidbits and photos of Texas history, women’s rights, and from a website named “Up from Slavery,” which has uplifting articles on how people with darker skin than I have reached great achievement in spite of racial prejudice.

In everything she posts or writes, she discloses what a caring, gentle, and loving person she is. I somehow identify with her. Her dedication to her children and grandchildren comes through on a grand scale.

She is one of my heroes.

And if my wandering lifestyle had not occurred, I would not have met such a courageous, wonderful woman.

That validates my choices. 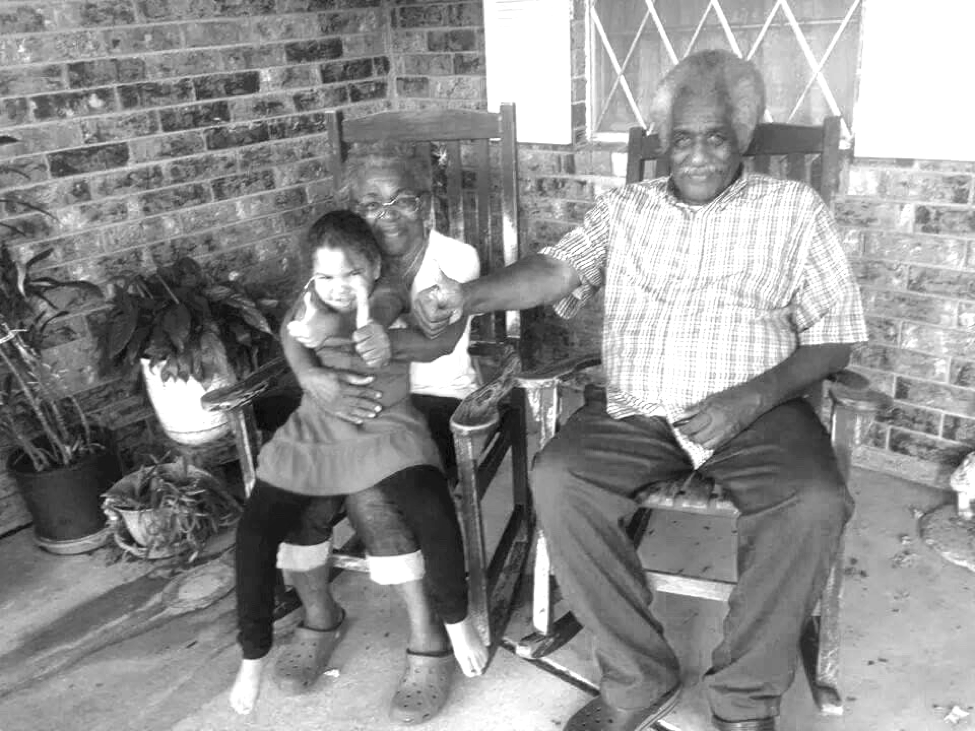 Leonore and Leo Johnson with their granddaughter Naomi in the Johnson’s home in Brownwood, Tex.

1 thought on “We Are Family”