In 1970, i had a cup of coffee seventeen times in Qui Nhon, Nha Trang, or Cam Rahn Bay, Vietnam; was caught in the crossfire of .50 cal rifles between mistakened U.S. forces once, friendly fire i think it’s called; thought i was shot at five other times; and at night from my ship’s weather decks, watched tracers from firefights several miles away.

About 0200 in Qui Nhon, a cargo ship moored aft of the USNS Geiger (T-AP 197) on the DeLong pier had a zapper charge blow through her cargo hold. i watched from my stateroom porthole as she took on a list, held upright by her mooring lines with the huge tire fenders between her and the pier being blown up in the air and bouncing down the pier while the crew from several Asian countries running down the pier avoiding the bouncing tires and some climbing our accommodation ladder to inquire about joining our Merchant Marine crew.

At anchor in  Nha Trang Bay after Army intelligence informed us we were a target for zappers in the area, i spent the night with Doc Miles Humphrey, standing by the safety lines on the 03 level, with my .45 cal pistol, the only one of five guns i knew were on the ship, feeling pretty hopeless, watching for any signs of underwater swimmers. The zappers must have been scared away.

In 1984-85 with USS Yosemite anchored off of Masirah, Oman, we were informed by Navy intelligence Iranian gunboats might attack us. We had ad hoc .50 cal rifle teams posted around the perimeter of the main deck and 02 levels for a week or so. Checking out these teams with almost no weapons training, the helpless feeling i had in Nha Trang Bay returned.

In my 15 years at sea, i experienced about ten near collisions and a half dozen or so storms strong enough to frighten the most experienced mariners. i don’t remember ever being scared in the Navy. I felt helpless those two times, i was concerned, especially when other ships were putting my ship and the crew in danger by not following the rules of the road. i have been frightened a number of times in my non-Navy life.

But then, the dangers i brushed near were nothing. Nothing. i have friends, close friends who died. i have friends who were horribly injured and brutally tortured — none of them talk about it, or regret it. Death, pain, long term disability are part of the agreement. They are proud of their service.

i think of my father’s service and the service of his generation. It is mind boggling to me: he and all of the other men in that generation who dropped the only lives they had ever known to fight a war in places they had never dreamed of much less been to.  Jimmy Jewell was a youthful automobile mechanic in small country town with his first child on the way. He decided to enlist before being called by the draft. He felt it was his best choice and would allow him to serve using his expertise, fixing things, like automobiles. With a pregnant wife and a sense of duty conflicting in his decision making,  he made his decision based on the inevitable service he knew would come to pass. He took with him a pocket-size faux leather album he kept in his pocket the entire time he was gone containing precious photos like the one here of his wife and him. 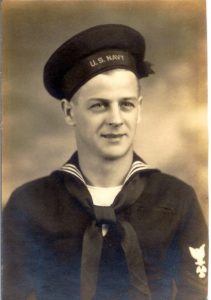 i try to imagine how he felt as he went to Parris Island, South Carolina for boot camp, and Davisville, Rhode Island for Seabee training, and Gulfport, Mississippi to wait for his ship, places in the states he had never been. Then, what was on his mind when, with 1 five-month old son and his wife on his mind, boarding that liberty ship, traversing the Panama Canal, picking up more 75th Battalion Seabees in San Francisco, crossing the Pacific, and spending almost two years, in the middle of a war like no wars in its expanse. 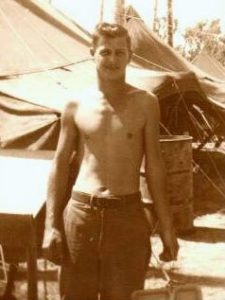 I try to imagine him watching kamikaze planes from his motor pool crashing before they reached him. i have been to several of the places in the South Pacific where he had been thirty or forty years earlier. i understand why many of his photos show him shirtless in the intense heat and humidity on those jungle islands.

The stories he told me about those times in the war at Espiritu Santo, Vanuatu, New Caledonia; Bougainville, New Guinea; an LST ride to Luzon, Philippines. He showed me photos as he told me the stories and gave me a box with those photos to keep. i fervently wish we had taken time for him to tell me more stories and also wish i had recorded those stories in order to get them right in the retelling.

But there was one photo that tells it all for me. Today, Veteran’s Day, is not just to honor those who died in service. The ensign (U.S. flag to you non-Navy folks) is flown two-blocked, not at half mast for it is a day to be proud of our service, not sad. Still there are those who didn’t come back from their service. They remain in places their sons and daughters won’t ever visit. One of those who didn’t come back could have been my father. Heck, now that i think about it, i might not have come back from some of my service: just haven’t thought of it in that way before.

i am proud of all of my fellow veterans for their service. But there is a quiet awe i feel when i look at the photo my father gave to me: