We saddle up the big horse in the sky tomorrow headed east.

Too long away. Always is too long.

Too short of a stay. Always is.

But the stay is also too long.

Sometimes i wonder why we go. 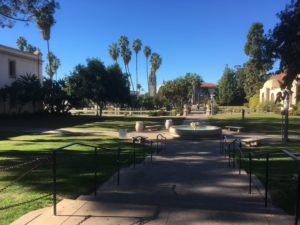 After all, i went Christmas shopping last Thursday and just happened to wander into Balboa Park. It was seventy-two, no wind. i parked by the carousel, wound my way past the Casa del Prado Theater and the Natural History Museum to look out on the fountain. The Timken Museum is on the left, the Botanical Building on the left, and the lily pond just past the Timken make it a peaceful vista. 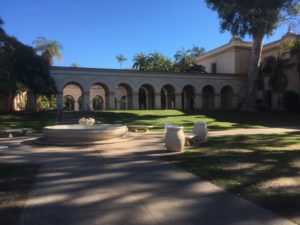 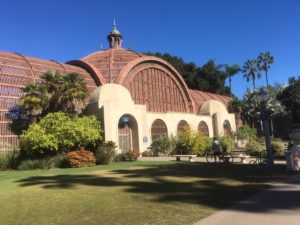 i pass the Botanical Building, home of about a gazillion ferns and plants of all kinds of variations. It is cool inside, even in the Santa Ana’s. Someday, i plan to actually stay for a while when i go inside, study the plants, learn a little biology. It would be good to get smart about plants and those strange ferns. But i have other things to pursue. 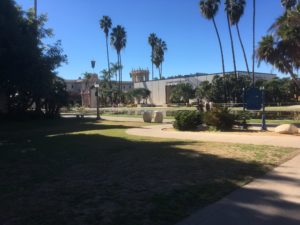 i walk past the Timken and look out at the plaza, a place to mingle. It is a comfortable place with nice dining on the edges, much better since they closed off the plaza to traffic. i try to imagine 1915 and the California Pacific International Exposition, which created these buildings, this atmosphere. It is not hard to imagine. 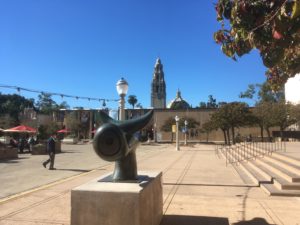 i look at the California Tower and the Old Globe beneath it. Magnificent structures and the Old Globe, close to an exact replica of the original with many plays, especially those of Shakespeare, and i think i just don’t go to enough of them. i have enjoyed every one i’ve seen in that place, yet i always seem to find reasons to not go. Crazy. 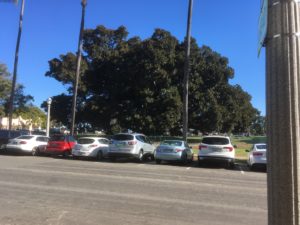 i must go. It’s only been less than an hour, too short a time, always too short, too many things to get done. on my walk back to the car, i pass the Morton Bay Fig tree, enormous now, planted as a small sapling at the exposition in 1915.  It is about eighty feet high and close to 150 feet wide, one of nature’s ways to make us feel small with her majesty.

But i will not tarry here this season. It’s time go home and see friends and family. Again, i ask myself why. i have friends here:

Jim and Sharon Hileman and Pete Toennies with his Christmas lights sweater, fortunately turned off for this photo. Sharon went to high school with Maureen; life-long friends. Jimbo was my second golfing buddy in San Diego. The first, our best man, the helo pilot Dave O’Neill, is somewhere in South Dakota dove hunting…and Pete, well, i think i’ve said enough about him. 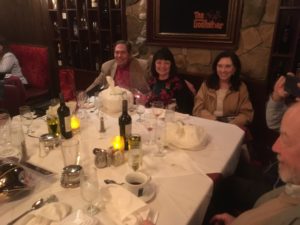 Then there is the “Grand Whiner” of the Friday Morning Golf Curmudgeons with a fez  we gave him to prove it, and a hero few know about, Marty Linville with his wife Linda, a Chiefs fan through and through. Next to them is Joanne Stark, Irish through and through who loves French and is from Boston. the profile on the edge is the goofy guy. 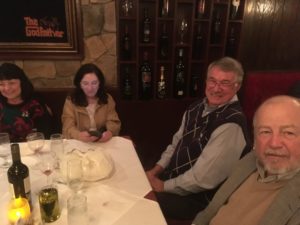 Rod Stark with Joanne and the goofy guy. Rod is a great golfer, a former club pro and the guy who almost read my retirement speech while i was with my wife in labor…but i made it. He’s one of the nicest guys around. There will be more about the goofy guy in a later post. 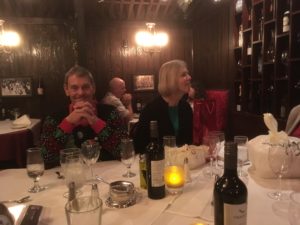 It’s not a great photo of Nancy, but she is one beautiful lady, like six feet tall and can turn heads when she goes to brunch at the Hotel del Coronado’s Crown Rook with a five-six goofy guy. She is also caring beyond belief. She has been tending to one or both of her parents for twenty years. Pete helps, and they both have included us as family on many outings. 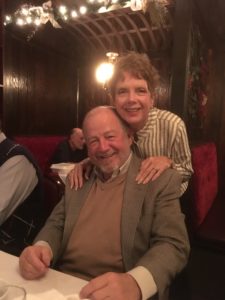 And of course, there is this native San Diegan who just happens to be my wife. This is her home yet she follows me…no she doesn’t follow we go side by side anywhere together. Have been doing that for a long time. She fits in with every family and friend i have, perhaps even better than me. She is sophisticated and sometimes unabashedly a little crude. She loves jokes; she laughs and the whole world laughs with her. And San Diego is her place. So i wonder why are we going to travel across the country where i won’t play golf, where i won’t go to Balboa Park on a perfect day in December. 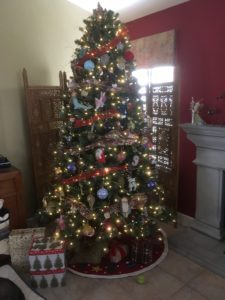 After all, we have a tree, a beautiful one at that thanks to Maureen and Sarah, and, i mean we haven’t had but two Christmases here since we moved in 1989. We had Christmas at Maureen’s dad’s house from our third year together — the first i was in the Indian Ocean, and the second (another sea story) we spent with Frank and Jan Kerrigan in Jacksonville. That was a long time ago and i think it would be lovely to have Christmas here, and i could play golf the next day, and we could go to Balboa Park the next, and the zoo the next, and dine at our favorite places, and take a walk along the ocean, and we wouldn’t have the stress of Christmas travel, or the pain of packing and unpacking and packing and unpacking, and getting home and sorting through the mail, and spending time with the neighbors and…

But you know what? We’ve been coming to Lebanon and Chattanooga, or rather Signal Mountain since 1992 and it’s Christmas, our Christmas, and my sister plays the bells in the Christmas Eve and home. Well, home is home and will always be home.