Daylight Silly Time could have done it. i don’t know. i do know i did the taxes today. i filed away a whole bunch of stuff. i entered a few posts, including a chapter of my book. i organized. i filed. i threw away stuff, lots of stuff, paper mostly. i watched a little golf. Then toward the end of the day, i pulled out a folder labeled “False Starts.” Damn, i wrote a lot of crap. But amongst the throwaways, i found a couple worth saving. 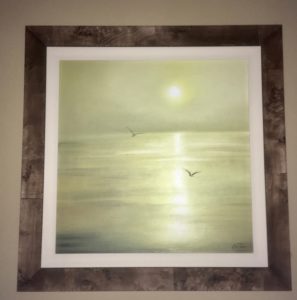 One was to Maureen i wrote in 1988. On my last Navy port visit to Hong Kong in 1981, i went  to a market area on the Kowloon side close to the Star Ferry pier. i stumbled around and ended up in an art studio. i saw this painting and was entranced. i bought it. i don’t remember what it cost, but it was likely a good deal. It wasn’t Stanley Market good, but it wasn’t outrageous. i had it framed cheaply and it was in my home office of our first home.

When we moved it went into hiding. But i pulled it out a year or so ago, and Maureen agreed it would look good in our living room. She had it reframed. The photo here doesn’t do it justice, but it did prompt me to write this poem one night years ago

you sleep in the next room;
i, tired from weekend tasks
start to bed but stop
to look at Lisi Tang’s painting
striking me as a “lonely” painting;
a beautiful tribute
to the loneliness of
the vast and omnipotent sea
yet
there are two gulls,
beautiful in their flight together,
graceful, in syncopation,
juxtaposed against the vastness of the sea;
i see us, the gulls,
flying into the mist of the morning sea
aware of its vastness, its cruelty
flying toward infinity together:
a significant moment:
the two of us
on the sea of time.